Two-faced Britain: My 50 years in the land of lions and lambs

Brexit shows a British duality familiar to India, jewel in its crown, and Ireland, its oldest colony 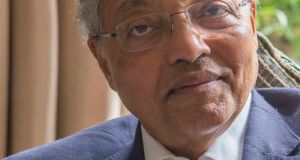 Mihir Bose: Brexit negotiations have displayed this duality which is so central to the British, alternating between a rapacious lion and a cuddly lamb whose favourite word is sorry

In 1938 Pietro Quaroni, Italy’s ambassador in Afghanistan, visited British-ruled India and concluded that the British had two faces: the metropolitan face of Magna Carta, Habeas Corpus and the Mother of Parliaments which only Westerners saw. Then there was the ruthless imperial face presented in the British colonies, “of how to rule and how to ensure obedience. With this second England, it is unwise to take liberties.”

The Brexit negotiations have displayed this duality which is so central to the British, alternating between a rapacious lion and a cuddly lamb whose favourite word is sorry.

In my nearly 50 years in Britain I have seen both faces. Arriving nine months after Enoch Powell’s rivers of blood speech, I was quickly made aware that because of my skin colour I was the other: called a Paki, told to go home, landladies refusing to rent bedsits, chased down the train by hooligans calling me a coon and assaulted during a London tube ride.

Yet, I was also very warmly welcomed by many lambs and it was in Britain that I fulfilled my great dream of becoming a writer. I could never have done it in India where the only job I got was through nepotism, employed by my brother-in-law in his firm. A very cushy life but far removed from writing.

This duality means the British, despite their oft repeated declarations that they like clear resolutions of disputes, always opt for Heath Robinson solutions. They hate saying a final goodbye. And when they part they haggle over money. The Brexit negotiations are only the latest example of such behaviour. Both India, its jewel in the crown, and Ireland, its oldest colony, provide many examples.

In 1947 when, after nearly 200 years of rule the British finally left the subcontinent, India was given dominion status. This meant accepting the king as the head of state. But just as Brexiters see a soft Brexit as Britain becoming a vassal of Brussels, Indians saw dominion status as servitude. Their hard Brexit was: declare India a republic and cut all formal ties with the British crown.

The British response was extraordinary. Churchill and Attlee wrote letters pleading with Jawaharlal Nehru, India’s prime minister, not to forsake the crown. Churchill said that even if India became a republic, in the style of republics in the Roman Empire, India could remain a republic within the Commonwealth and still accept the king.

The king seemed to like the idea, and both men thought of the King becoming the President of India. Atlee went even further and wanted India’s constitution to have a specific role for the British monarch. He wondered if a republic was really in the traditions of India and suggested a title might be found for the king from India’s heroic age. He talked about the royal family being of a universal nature, transcending creeds and races.

Nehru thought the ideas were “juvenile” but, educated at Harrow and Cambridge, he overrode fierce opposition from within his own cabinet and unilaterally changed 20-year-old party policy, keeping India in the Commonwealth. The result was more Heath Robinson than Theresa May’s Chequers plan.

India became a republic with a president elected by the Indian parliament. Since independence the British monarch has had no powers in India, but the old imperial club of white members was now renamed the Commonwealth and India accepted “the King as the symbol of free association of its independent member nations and as such the head of the Commonwealth”.

How Brexiters love this Heath Robinson solution. Boris Johnson even began his resignation speech by saying that during his tenure as foreign secretary, “We have rejuvenated the Commonwealth with a superb summit that saw Zimbabwe back on the path to membership and Angola now wanting to join.” Yet even as he spoke Zimbabwe had an election marked by violence, which the opposition claimed was a fraud, but the one voice that was not heard was that of the Commonwealth because it has no power over Zimbabwe.

The withdrawal from India also saw a row about the money Britain owed the Indians for the huge amount of Indian goods and services it had used during the war. Churchill did not want to pay the debt, but the Attlee government eventually did as I suspect Britain will pay the EU when it leaves.

Ireland is another classic example of the British never wanting a clean break. When southern Ireland got independence in 1921 Ireland could only send ambassadors in the name of the British monarch. So, during the second World War when neutral Ireland had an embassy in Berlin it could not send an ambassador to Nazi Germany as he could hardly present his credentials to Hitler in the name of George VI.

It was only in 1949, 28 years after Ireland got freedom, that it became a fully-fledged republic. Imagine the row if the transition arrangements for leaving the EU take quite that long.

And while unionists in Northern Ireland are fiercely opposed to being part of a post-Brexit customs union with the Republic, as this would suggest the North is no longer part of the United Kingdom, ever since 1921 the two parts of the island have had one Irish rugby team with northern players just as keen to beat the English as the southerners.

Brexit is also the latest example of the British always wanting to have their cake and eat it. This makes them feel they are morally in the right which is very important to the British. Even some of the great anti-imperialists, bitterly opposed to the empire, exhibited such duality.

There could not have been a more eloquent writer on the iniquities of the empire than George Orwell. During the war he argued Britain should give India independence for otherwise “our claim to be defending the coloured peoples against fascism will never be believed”. But in the very next sentence he claimed that, “When a British government offers them [Indians] unconditional independence, they will refuse it.” His reason was Indians knew they could not run their country without British help.

Substitute the EU for India and you have the Leavers’ Brexit policy: withdraw from the EU but still enjoy all the benefits as the EU cannot do without us.
Mihir Bose is the author of Lion and Lamb, A Portrait of British Moral Duality, Haus Publishing. £7.99