Nothing should ever get in the way of a good story 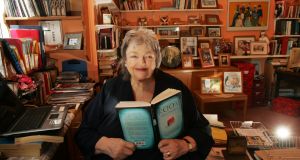 Maeve Binchy has been bestowed with “national treasure” status but her brand of storytelling wasn’t included in this year’s praised anthology of women writers, The Long Gaze Back. Photograph: Cyril Byrne

Speaking at the Hay Festival earlier this year, the international bestselling author Marian Keyes complained that she’d never won the Wodehouse prize for comic fiction, adding: “Say what you like about me but my books are funny”. It’s understandable that a woman who writes about everyday lives with comic flair might feel a little aggrieved at being overlooked for a prize for comic writing. After all, as Keyes pointed out, she’s not going to win one for literature. To be taken seriously as a writer she’s been told to “knock off the humour”.

The Wodehouse prize aside, it is undoubtedly true that the gatekeepers of what is regarded as good fiction attach greater importance to literary novels than so-called popular fiction, or anything that’s laugh-out-loud humorous. This is evident in the list of names that pop up over and over again on the review pages of newspapers and the shortlists for prizes. Sometimes, it’s hard not to think that many of these authors sit down with their writing eye literally on the prize rather than on the story they’re trying to tell.

The bias towards literary fiction over popular fiction is obvious not only in the way the books are reviewed but also in the manner that authors are portrayed. Literary authors are introduced at festivals as “great talents” or creators of “seminal works”. The successful commercial fiction authors at an event I recently attended were introduced as “the girls”. Of course this may have been sexist rather than elitist, but the two have a habit of going hand in hand where conversations about fiction are concerned.

It is clear that there’s a difference between the book as cultural work of art and the book as entertainment, in the same way that there’s a difference between a classical symphony and a musical. But to place one above the other is doing all readers a disservice. Good storytelling is also an art and even though it is an inherent part of our Irish culture, it is under-represented in studies of our (very male) literary tradition.

Although this shouldn’t be a gender issue today, it’s also the case that men writing commercial fiction tend to concentrate on crime and thrillers, both of which have been granted something of a literary pass in recent years. Once the male protagonist has some personal demons (the most popular character being a work-obsessed maverick who doesn’t follow the rules, drinks alone and and is suffering emotionally due to the breakdown of a relationship), the writer can successfully persuade the critics that he hasn’t simply written a beach read and be reviewed accordingly.

Because it seems that there’s nothing less literary than spending time on the beach enjoying a good story!

But why is it that writing as an art form is deemed more worthy than writing to tell a story? Why are pages of descriptive prose or clever wordplay, considered more important than character development or plot? Are the guardians of the newspaper reviews right to think that one kind of fiction is more “worthy” than another? And does it matter?

Ireland’s strong storytelling tradition has been furthered by an army of talented women who have put female characters as protagonists at the front and centre of their work. It was undoubtedly our finest narrator, Maeve Binchy, who first brought Irish women’s voices to the fore, both in Ireland and overseas. She inspired a generation of other Irish women writers to believe that it was possible to set contemporary fiction in Ireland and have it seen as relevant to a wider audience. Although Binchy has been bestowed with “national treasure” status, her brand of sympathetic storytelling wasn’t included in this year’s praised anthology of women writers, The Long Gaze Back. Nor were any of our best-known contemporary storytellers.

Last year the Arts Council in England reported that there had been a collapse in sales and advances for literary fiction, with the market increasingly moving towards more commercial books. The author Matt Haig ascribes this to an unconscious snobbery. Urging people not to dismiss literary fiction he commented that “intelligent books can be popular books”. He seems not to realise, however, that popular books can also be intelligent books, and that most are.

Much commercial fiction written by women is intelligent. The fact that issues such as bereavement, addiction, rape and emotional abuse can be dealt with in an empathic rather than observational or judgmental way doesn’t make these books any less deserving of praise. And while it is undoubtedly true that not all commercial fiction is well-written, the same can also be said of literary fiction.

No author wants to see a collapse in fiction sales, literary or otherwise. It has been increasingly difficult to make a living from writing any genre of book over the last decade as a continual push for lower pricing and free digital downloads erodes authors’ incomes. For all writers a healthy and diverse book universe is essential.

But we need to rid ourselves of this outdated notion that writing as an art form is essentially superior to writing as entertainment. The worst literary book is not, for some vaguely artistic reason, superior or more worthy than the best commercial fiction book. We need to stop describing literary fiction as “serious” and storytelling as “light” as though there is something noble about the former and indulgent about the latter. Readers should not be made to feel that their choice of book is inferior based on an intellectual prejudice.

Telling our stories has aways been important. Stepping into someone else’s life through the pages of a book widens our appreciation of the world. Whether we choose to spend our time with a literary prizewinner or the latest bestseller is irrelevant. A failure to appreciate this diminishes our storytelling traditions in favour of a more elitist approach to what reading a book should be.

And that’s not good for anyone.