This volume has thematic unity going for it, but in other respects it is hamstrung 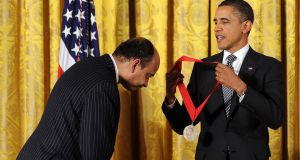 Following Germany’s early exit from last summer’s World Cup, the German tabloid press focused its ire disproportionately on one player. That Mesut Özil hadn’t performed any worse than his teammates was beside the point. Prior to the tournament, Özil, who was born in Germany to Turkish parents, ill-advisedly had his picture taken with the dictatorial Turkish president Recep Erdogan. The gesture was blown out of proportion by the media; in the wake of the team’s failure, the controversy became a magnet for dog-whistle racists who suggested that the country’s multiracial squad lacked a true German identity. Meanwhile the ethnic composition of the victorious French squad also prompted heated debates on social media: some fans celebrated the achievements of the team’s non-white players as a specifically African triumph, whereupon others objected that this diminished their Frenchness. Despite our increasingly heterogeneous world, the idea that you can be both one thing and another thing remains an explosive notion.

Against this backdrop, a book-length intervention on the subject of identity by an eminent philosopher of mixed English and Ghanian descent promises to be just what the doctor ordered. Kwame Anthony Appiah’s The Lies That Bind: Rethinking Identity is a survey of the concept of identity – encompassing race, colour, class and culture – from Antiquity to the present day, through the horrors perpetrated in its name in the 20th century. Much of it, in truth, is merely a recapitulation of the basic tenets of liberal pluralism. In a chapter on faith, for example, Appiah notes that all the major world religions are “fissured into a vast number of sects” and these “do not speak with a single voice”; they are not monolithic but “a bundle of continuities and discontinuities”. He observes that fundamentalists and militant atheists share a dubious assumption that religious identity entails a fixed set of scripturally determined beliefs, whereas in reality it was the fluidity and flexibility of religious belief that enabled religion to evolve through time: “If scriptures were not subject to interpretation . . . they wouldn’t continue to guide people over long centuries.”

“To be a nation,” Appiah writes, “it is not enough to meet an objective condition of common descent; you have to meet a subjective condition, a condition that lies in the hearts and minds of its members”. This is more or less a re-wording of Benedict Anderson’s seminal thesis about how nationhood is premised on what he called “imagined communities”. In later chapters Appiah revisits the rise of scientific racism in the 19th century, reminding us that it functioned as a legitimating rationale for imperialism; a chapter on social class looks back at Alexis de Tocqueville’s Democracy in America and ponders whether American society has truly created a “democracy of equals”. Appiah dismantles the idea of “the West” as a monolithic entity, and points out that identity-based movements that seek to define themselves in opposition to dominant cultures – as Afrocentrism did in relation to Eurocentrism – are condemned to live in their shadow. All of these things bear re-stating – indeed, we should never lose sight of them – but a more direct engagement with the contemporary moment would have been welcome.

Appiah does occasionally get stuck in, and to good effect. He calls out the hypocrisy of certain far-rightist movements that purport to defend the European humanist tradition, insisting that their racially discriminatory outlook is irreconcilable with the values they claim to espouse. Appiah acidly notes that Pegida’s stated aim of preserving “our Christian-Jewish Western culture” offers “a pleasant compound in which a hyphen masks a history of massacres, expulsions, and mass murder”. Had the book contained a little bit more in this vein, it might have constituted a more potent response to these toxic times. For the most part, though, we are treated to bromides such as this, from a segment on social mobility: “People will inevitably want to share both money and status with those they love . . .. But we shouldn’t secure our children’s advantages in a way that denies a decent life to the children of others.” This is a perfectly inoffensive sentiment, but it tells us nothing.

It is pertinent to note that The Lies That Bind was not composed as a single piece of writing, but is made up of some half a dozen Reith Lectures delivered in London, Glasgow, Accra and New York across 2016. Such collections invariably require a certain amount of editorial wizardry if they are to acquire a sense of wholeness. This volume has thematic unity going for it, but in other respects it is hamstrung. There is, at the prose level, a big difference between what will fly for the purposes of a lecture, and what will work on the printed page. A lecturer has a certain license to drone on interminably in the expectation that their wisdom will be osmotically absorbed by the audience, who are in any case captive; an essayist bears a greater onus to positively engage the reader. These pieces chug along at a leisurely trundle and only rarely move up from second gear. They may well have made for edifying listening but, collated here in book form, they are less than the sum of their parts.

Some books come into being because an author has something urgent to say; others happen because the material is to hand, the writer has some profile, and there is a quick, low-margins buck to be made. This one, I daresay, falls in the latter category. The Lies That Bind is a wise and erudite introduction to this most vexed of subjects, and Appiah’s core message - that “culture is messy and muddled, not pristine and pure” - is truly timely. But there will be better, more incisive books written about culture and identity this year.