Living with the Gods: On Beliefs and Peoples review 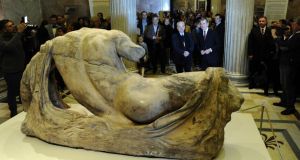 Neil MacGregor (centre right) at the sculpture of the Greek river god Ilissos at the State Hermitage Museum in St Petersburg: he is keen to stress the virtue of respect for cultural and religious pluralism. Photograph: Olga Maltseva/AFP/Getty

Book Title:
Living with the Gods: On Beliefs and Peoples

Through the spring and summer of 2018, on both sides of the Atlantic, two of the world’s leading cultural institutions, the British Museum in London and New York’s Metropolitan Museum of Art each hosted exhibitions (with accompanying books) celebrating and interrogating religious faith through objects. In New York, the wildly successful Heavenly Bodies: Fashion and the Catholic Imagination has explored how the religion’s imagery and symbolism has impacted on contemporary fashion. A collaboration between the museum’s Costume Institute and its department of medieval art, the exhibition juxtaposed exquisite gowns and jewellery by Balenciaga, Galliano, McQueen and Dolce & Gabbana with sacred objects and religious manuscripts, stimulating the senses and probing how, through the ages, fashion has reflected or subverted religious values and beliefs. Across the Atlantic in the British Museum, the Living with the Gods exhibition has explored similar territory, examining the history and significance of religious belief and practice through a judicious and intriguing selection of sacred artefacts from the museum’s vast collections. The public’s interest in the subjects of these exhibitions reflects the resurgent interest in religion as a cultural and political phenomenon, as well as its enduring appeal for believers.

The Living with the Gods exhibition was curated by Neil MacGregor, former director of the British Museum, and the accompanying beautifully illustrated book is a delight. The BBC Radio 4 30-part series was also excellent. Best-known for the acclaimed History of the World in 100 Objects, MacGregor is a highly original and effective communicator who brings to Living with the Gods the same intellectual ambition and cultural insight as was on display with earlier comparable projects. MacGregor is keen to tell the reader that Living with the Gods is neither a history of religion, an argument in favour of faith, nor a defence of any particular creed. Rather, “looking across history and around the globe, it interrogates objects, places and human activities to try to understand what shared religious beliefs can mean in the public life of a community or nation, how they shape the relationship between the individual and the state, and how they have become a crucial contributor to who we are”. MacGregor is interested in believing and belonging, in individual devotion and communal practice, in political and ascetic expressions of faith as well as in historical and contemporary forms of religion. Inevitably, therefore, his canvass is broad and risks being unwieldy. However, this difficulty is mitigated because his point of entry is through specific, local, often intimate sacred objects whose contexts are evoked as he reflects on the insights they might offer to the viewer. Moreover, MacGregor is not seeking to make a comprehensive argument about the nature or significance of religious belief. Rather, he embraces the necessarily fragmentary nature of his reflections in the hope that this approach through objects, places and activities will offer a different kind of window on the ways that societies have found to imagine and inhabit their place in the world.

Although the analysis is fragmentary and partial, nonetheless the structure of the book gives the topic a necessary coherence. The six major sections of the book examine: “Our Place in the Pattern” (ie narratives, rituals and objects from the four continents that articulate different communities’ understandings of the natural world and their places in it); “Believing Together” (ie stories and ceremonies that capture the transience of individual life and its different stages and rituals that establish connections across generations, including with ancestors); “Theatres of Faith” (ie reflections on the public realm of faith and how, in every age and on every continent, rules about the proper ordering of society have been articulated, defined and policed through the intertwining of religious and political power); “The Power of Images” (ie the idea and politics of religious images through the ages, how they create communal identities and how they can accommodate and even dissolve the contradictions and ambiguities of belief); “One God or Many” (ie the politics of monotheism and polytheism and their respective implications for pluralism and secularism, told through ancient and contemporary objects); and “Powers Earthly and Divine” (ie the uneven, often brutal outcomes of religious traditions in the service of politics and in the creation and maintenance of national and tribal identities).

Most of the objects at the centre of these reflections are located in the British Museum, and many of the rituals and sacred places are represented through artefacts or in manuscripts in the collections. Questions of the ethics of museum acquisitions and of colonialism are given a fleeting mention, although MacGregor is keen to stress the virtue of respect for cultural and religious pluralism whenever it arises in the interpretative frameworks of the artefacts themselves. Indeed, many of the objects are extraordinary and allow one to connect with the multiple and diverse ways in which human beings have given expression to their collective ideas about human beings and their place in the world, particularly through material culture. One cannot but be captivated by, for example, the Lion Man of Ulm, which opens the book, and which is arguably the earliest evidence of religious belief among humans, representing, as MacGregor argues, a cognitive leap to a world beyond nature and beyond human experience. The analysis of this and all other objects is quite general, and likely to frustrate some readers. However, the strength of the book is not in its detailed analysis of each object, but rather in its thoughtful and sometimes provocative reflections on religion and religiosity through this exceptional range of artefacts.

Rarely a week goes by without some media commentary on religion and its political impact. This is unsurprising given the turbulent nature of the transformations that are currently taking place, both within religious traditions themselves and in the ways in which certain religions engage with issues of political identity and territorial ambitions. Alongside and complementing such analytical discussions, one can see the great value of a work like Living with the Gods since it provides a different kind of insight into these enduring and important themes.

Linda Hogan is professor of ecumenics at Trinity College Dublin