Colm Tóibín on testicular cancer: ‘It all started with my balls’

Step by painful step, the novelist has written about his diagnosis, agony and treatment 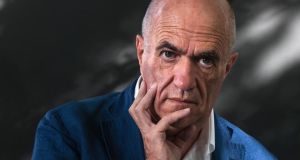 Colm Tóibín: the novelist before his treatment for testicular cancer. Photograph: Simone Padovani/Awakening/Getty

A good writer loves a good intro. Colm Tóibín begins his story: “It all started with my balls.” What follows is an account of being diagnosed with and treated for testicular cancer, in an 8,500-word article just published in the London Review of Books.

It starts lightly. He initially thought his testicular pain was caused by heavy keys in his pocket; after some internet research he self-diagnosed it as a hydrocele, or harmless swelling, which didn’t worry him . “Had I been sure how to pronounce it, I might even have started to boast about it.”

Last June he visited a urologist, who sent him for an ultrasound by “two young guys filled with kindness and sympathy”. They were aware that “taking your trousers and underpants down and lying flat on your back and then having some sort of gel poured on your junk before a type of prod begins to zoom around the outside of your balls is no fun”.

When his testicle got harder and bigger, a week later, the urologist removed it. A CT scan revealed a cancer of the testicles that had spread to a lymph node and a lung. Tóibín was referred to an oncologist. “For a few days I comforted myself by pretending that, because of my abiding interest in the mysteries and niceties of Being, I had to see an ontologist. Nobody except one of my fellow Irish novelists thought this was funny.”

The scan showed “a sort of carpaccio of the middle and lower parts of my torso, a slice of the inside of the self”, although the cancer on screen “seemed nothing more than a smudge, a few faint grains”.

So began a course of chemotherapy: four sessions in hospital, each a week long, with breaks of two weeks at home between each session. Tóibín describes excellent, calm medical care. He was told his cancer was curable. The journey he describes is brutal; he goes step by step through his treatment and its effects, from an initial bearable routine into pain and confusion.

The effect of the drug darkened the mind or filled it with something hard and severe and relentless. It was like pain or a sort of anguish, but those words don’t really cover it

His initial pattern at home: “I lay on the sofa in the house in Dublin and thought about things. I read a bit, but not much. I found that I had no interest in listening to music. For the next three months, I would not need to shave. My eyebrows would thin out but not disappear. The hair on my head would more or less go... In that first week after chemo I lost any desire to eat or drink, and I lost all sense of taste. Instead, my sense of smell became acute.”

His friend Catriona Crowe organised a house clean-up and shared news of the world, along with food that might be palatable. The seagulls were a problem. Tóibín was in excruciating pain the weekend Pope Francis was in Dublin, as he was stuck at home screaming in agony and drinking morphine.

“It was not merely that the chemo left me fully thoughtless so that as time went on I could not even read; the effect of the drug darkened the mind or filled it with something hard and severe and relentless. It was like pain or a sort of anguish, but those words don’t really cover it. Everything that normally kept the day going, and the mind, was reduced to almost zero. I couldn’t think. All I could do sometimes was concentrate on getting through the next five minutes because contemplating any longer stretch of time under the pressure of the chemo and the steroids (and perhaps some other drug) was too hard.”

After twists and turns in the story, he is discharged. Looking in a mirror, he observes: “It would take a while before his hair and his eyebrows began to grow again. It would take him even longer to get used to having only one sad, lonely ball.”