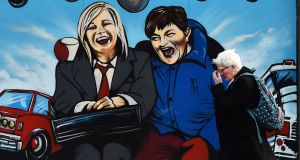 Siobhán Fenton’s The Good Friday Agreement is a working journalist’s take on the supposed framework for northern politics over the past 20 years. Groves of academe are choked with overgrown bushes and sprawling ground cover on the Agreement, much of it, at least to the non-academic reader, airless, thorny stuff. Fenton is splendidly brisk.

With a “Northern Irish Catholic” mother and English father, she deems herself “neither Catholic nor Protestant”. She was three when the 1994 IRA ceasefire brought her family back from Southampton, and left again at 19 for university in England. She believes herself dispassionate, yet became engaged enough on a visiting firewoman stint (for the Independent newspaper) to report the March 2017 Stormont election (the crocodile one) to stick around and do the legwork, interviews and reading that inform 300-odd pages.

There is no political game-playing, but Fenton paints in contributions others have neglected, in particular the short-lived but significant Women’s Coalition. She shies from the grudging interpretations, most often from opponents who offered no alternatives then or since, that claim the Agreement increased or “institutionalised” sectarianism. With the clarity of youth, she sees issues untackled in 1998 but recognises how unlikely progress would have been on some, if not all, given the negotiators involved and the constraints of their politics.

She regrets the agreement’s omission of structures to deal with unsolved Troubles deaths and the still unresolved horror of the Disappeared. But LGBT and reproductive rights, for example, were not on the agenda of the time. She notes crisply that “the rights of women and the LGBT community continue to be marginalised, often due to decisions taken at Stormont”. The DUP’s use of the agreement’s “Petition of Concern to block same-sex marriage means that a mechanism designed to protect vulnerable and marginalised groups . . . is now often a tool of oppression”.

Today’s comparatively short lead-times for publishing and no doubt frenetic work by author and editors mean the book reads with almost news-temperature. Loyalist paramilitary flags beside Cantrell Close, built as a “mixed” estate, are this marching season’s Belfast irritant; Fenton has them covered.

Her treatment of the abortion question misses little more than the Republic’s referendum result. She notes the then pending Supreme Court judgment (which emerged on June 7th) on Justice Horner’s dramatic finding in November 2015 that Northern Ireland legislation breaches European human rights law “in criminalising women who terminate following rape, incest or fatal foetal abnormality”. She also makes the nice point that Westminster scruples about infringing on Stormont by changing the abortion law “means the GFA is being used as a justification for the denial of reproductive rights”.

Discussion of “gendered violence” and “inter-generational trauma”, beyond the reach of 1998 negotiations, invites further reading. She cites Conflict, Peace and Mental Health by the much-respected David Bolton, and research suggesting children born well after the end of wholesale violence may inherit Troubles damage.

New students will be drawn to the well-established work on domestic violence by Monica McWilliams (foremost spokesperson for the Women’s Coalition) and Joan McKiernan, for example, plus later work by McWilliams with Lynda Spence, vividly demonstrating how concentration on paramilitary violence robbed other victims of attention. Police, prison officers, soldiers but also a number of politicians, business people and others working with the security sector could for decades apply for personal protection weapons. These researchers noted that women “in homes containing men ‘protecting’ the state were at significantly higher risk of harm”. The fact that during the Troubles, one in every 17 people legally held a weapon has had appalling consequences. One illustration came from the wife of one such man: “He would put the gun to my head and play Russian roulette with it.”

Factual as well as fictional takes on the Troubles can test the objectivity, tolerance and memories of older observers and participants alike. The negotiations that produced the Agreement often descended to woeful nit-picking; Fenton quite rightly whisks over them. She saves colour for recent years, though is a dab hand with vivid quotes. “What is Mrs Thatcher going to do when she has shot the first thousand unionists in the streets of Belfast?” That was today’s somewhat superior veteran, Peter Robinson, on 1985’s proto-Agreement.

Disciplined about cliches, she omits Arlene Foster’s crocodiles. Retelling the draft agreement debacle of last February, she nonetheless manages to sum up the unlikelihood of a restored Stormont any time soon. When it became clear that a deal depended on compromise “party politicians such as Arlene Foster were able to stomach it, but the grassroots, who had been fed on a diet of fierce anti-Irish language rhetoric, were not. The DUP had simply talked themselves up to too high a point from which to stage a dignified climbdown”.

Future visiting fire-persons less clued up than Fenton should grab the book, which includes a string of recent useful poll findings. Its lucidity will also pleasantly surprise a wary general reader.