The banned Irish feminist writer who took on De Valera 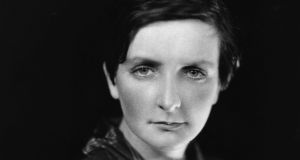 Kate O’Brien in 1926: her fiction and activism were so potent that governments sought to muzzle her. Photograph: Sasha/Getty Images

Kate O’Brien and her provocative contradictions have drawn the attention of select readers and critics – even as several of her books remain out of print. Since her death in 1974, she has been the subject of full-length biographies and thoughtful literary studies that register the critical and cultural concerns of their era.

In 1987, the critic Lorna Reynolds portrayed O’Brien as a feminist and ‘romantic realist’ and offered readers a first-hand account of their ‘memorable and stormy friendship’. Subsequent scholars such as Eibhear Walshe have underscored her importance as a lesbian writer, while Jane Davison has highlighted her fascination with Spanish literary culture.

This summer’s special issue of the Irish University Review journal focuses on O’Brien and considers her writing through new approaches generated by medical humanities, new contexts for her work such as late modernism, and new archival materials such as those recently donated to the University of Limerick. The essays in this collection bring to light exciting through-lines in O’Brien’s work, including her commitment to theatre, her standing as an international writer, her engagement with modernist formal experiment, her nuanced critiques of class, her considerations of privacy, and her deep frustration with the government of her native country.

So who is this ‘new’ Kate O’Brien, and how does she benefit from the light now being shed on women writers who are too often shunted to the darker and dustier corners of the canon, criticism and classroom? Even from a fresh critical vantage, O’Brien remains a deeply political writer with a vexed relationship to her native Ireland. O’Brien was profoundly critical of Éamon de Valera and his policies, and Anthony Roche argues that her historical novel in That Lady (1946) masks de Valera in the guise of Spain’s autocratic 16th-century king Philip II. O’Brien was also critical of the impulse for personal self-preservation that motivated Ireland’s neutrality in the second World War, and according to Anna Teekell’s persuasive reading, this critique surfaces in The Last of Summer (1943) through the character Hannah Kernahan, who embodies the role of traditional Irish mother.

Any consideration of O’Brien’s relationship to political authority reminds us that two of her novels, Mary Lavelle (1936) and The Land of Spices (1941), were banned in Ireland by the Censorship of Publications Board. The banning of The Land of Spices is a literary historical touchstone akin to the riots accompanying the premiere of Synge’s The Playboy of the Western World or the Paris publication of Joyce’s Ulysses. Reconsidered in an essay by Jana Fischerova, this notorious event recalls official forms of repression endemic to mid-century Ireland, while stressing that artistic suppression continues to pose a threat internationally. A number of essays acknowledge the important, much discussed sexual politics laden in the scene from The Land of Spices where Helen’s father and his student Etienne share ‘the embrace of love’, but they also consider elements of this powerful novel that have been occluded. Kelly Sullivan’s study of letters embedded in the narrative draws attention to the innovative formal choices made by O’Brien in this censored novel.

Like many Irish writers, O’Brien moved with ease between and among literary traditions and genres. She is increasingly placed among renowned modernist and late modernist writers: for example, Aintzane Legarreta Mentxaka’s richly detailed study of The Flower of May (1953) identifies points of contact between O’Brien and Virginia Woolf. O’Brien was also an adept playwright, who wrote commercially and critically successful drama meriting a twenty-first century stage production. Like her contemporary Sean O’Casey, she thoughtfully tethered female sexuality to class issues, as James Moran reveals in his study of her plays. My own essay suggests that O’Brien’s nostalgia for the Irish dramatic revival helped inspire Pray for the Wanderer’s (1938) ambitious, if awkward, blend of fiction and drama, realism and modernism.

The array of archival materials catalogued in the Kate O’Brien collections at University of Limerick and Northwestern University in Chicago opens up abundant opportunities for innovative analysis. In her study of the mind-body relationship in Mary Lavelle, Margaret O’Neill examines letters exchanged between O’Brien and her brother-in-law Stephen O’Mara. In them, O’Brien and O’Mara discuss the character of Don Pablo, debating the biological, emotional, and cultural logics for his heart disease (this article can be accessed for free on the IUR website). Matthew Reznicek interprets her bildungsromane Without My Cloak (1931), The Flower of May, and As Music and Splendour (1958) through the geography of Paris. His reading of O’Brien in a European context will, we hope, invite more attention to her voluminous travel writing.

A wealth of underexplored archival materials scattered across Europe and America – her letters and lectures, journalism, radio broadcasts for the British Broadcasting Corporation (BBC), Radio Éireann, and Raidió Teilifís Éireann (RTE), unpublished play and film scripts – can contribute further to our understanding of O’Brien and the historical and social contexts in which she wrote. And in fact, the new Museum of Literature Ireland (MoLI), a collaboration between UCD and the National Library of Ireland, is developing an exhibition on these facets of her work for 2019.

For this issue of the Irish University Review Christopher Murray has unearthed a thought-provoking example of O’Brien’s literary criticism entitled ‘The Art of Writing’. Republished for the first time since 1964, O’Brien’s address to the UCD Graduates’ Association contemplates the difficulty of creating art, shares her personal experiences as a writer, and glides across the history of the modern novel, to urge discipline and precision in ‘the art of writing’ and to celebrate the imaginative artists who continue to ‘dream’ amid artistic and political crises.

Not only was O’Brien a banned writer who nudged forward feminist and queer concerns in her fiction, but she was also a literary activist, working with the Women Writers’ Club in Dublin to advocate women writers, and with PEN International and the Comunità Europea degli Scrittori (European Community of Writers) to advance international writing and to protect freedom of expression. She was also a prescient cultural critic. In her 1955 consideration of her ‘far-away, untidy, wasted days in UCD’, she announced her ideal of university life: ‘That we arrive, ignorant but alert, into a society which will permit us to pursue, along such avenues as we choose, the difficult quarry, truth’. She emphasizes her ‘awkward, out-of-date point … that a university training should be, demonstrably, useless’.

She also, hilariously, bemoans the amenities of modern university life such as air-conditioned dorms and strict student schedules – a reminder that present-day complaints about pampered undergraduates unable to embrace unstructured time are hardly new. O’Brien’s urgent call that university life should take young adults ‘timid, and accustomed to organization and docility’ and prepare them for critical citizenship seems particularly relevant today. This lecture reminds us of O’Brien’s acuity as well as her bravery: her fiction and her activism were so potent that governments sought to muzzle her during her lifetime. Today, it remains with us to read, study, and teach her. We need to read Kate O’Brien not only for a fuller appreciation of modern literature and a greater understanding of 20th-century Ireland, but also for her insights into powerful institutions and pernicious ideologies that seek to repress freedom.