The American ideal is that the child owes the parent nothing 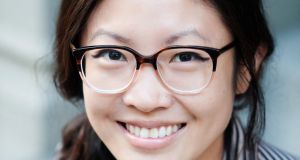 Weike Wang: immigration can make the immediate family stronger than it would have been. Photograph: Saavedra Photography

The question of who is the parent and who is the child has always fascinated me. Biologically it is not a very interesting question but emotionally, psychologically, it is.

Recently I wrote a book. The book is a coming-of-age novel of a young scientist. She is a chemist who is having trouble with love, both romantic and familial. She is also an immigrant, an Asian American and a woman in a field dominated by men. For part of the novel, she meditates on her relations with her parents, moving between past and present, which I think, is what one does when lost.

While the novel’s parents are not my parents, they represent parents I am familiar with. They are difficult people, and certainly difficult parents, but my intention in creating them was not to emphasise their flaws but to highlight their humanity. They are not unloving. In fact they love their daughter so much it hurts and in the Chinese language, to love, especially to love in the familial sense, is to hurt.

Some years ago, the phrase tiger mom became popular. These were mothers, often Asian mothers, who were harsh to a fault and for a lack of a better word characterised as crazy. To me the phrase feels reductionist. I can’t tell you how many times I have been asked if my own mother is a tiger mom. No, I usually reply, on the Chinese zodiac she is a bull and my father is a rat and I am a snake and my husband is a lamb and my dog is a dog.

Last month, when I was on tour in Seattle (a wonderful city), an audience member said she appreciated my writing these parents. Then she started to cry. She was also an Asian American woman. I have had many people talk to me about the book and then start to cry. The conversation then usually circles back to their parents, how much they feel is owed and yet how desperate they are to move on and yet how unwilling they are to leave their parents behind.

The American ideal – and I speak now from having lived in America for many years, from having married an American and met his American family, from having watched episodes of Gilmore Girls, which is for whatever reason, always on reruns – is that the child owes the parent nothing, everything the child accomplishes is his or her own. This freedom allows for the parent to become the child’s best friend (Gilmore Girls) and for parent and child to see each other as equals. Yet it also encourages rebellion, which is very American. Why should I listen to you, Mom? I am my own person. I am going to make it on my own, guns blazing (also very American).

Unsurprisingly, eastern culture is the exact opposite. Parents raise a child so that in return, the child once grown can take care of the parents. The child is never quite separate from the parents and is never quite considered an equal. The love of an Asian parent is also not often mentioned or expressed, yet that does not mean it does not exist. The Seattle reader actually put it nicely – the love of an Asian parent is immersive, you are surrounded by it.

Yet in both cultures, much of what defines a parent-child bond is a teacher-student relationship. My husband was brought up on his father’s music and his mother’s reading. His father enjoys Zeppelin and the Beatles, as does he. His mother enjoys Steinbeck and King, as does he. It is then clear, from day one, who is the parent and who is the child, who is the teacher and who is the student.

Immigration, however, complicates those roles. I learned English faster than my parents. I knew about Zeppelin before they did. However, I cannot write Chinese fast or well. I cannot read Chinese fast or well. I have no sense of China’s very long history, which my parents do. Stephen King, they are not familiar with but mention a historical Chinese king and they will know in what dynasty he reigned and what he did.

Yet despite all that they know, I for a long time held what they didn’t know against them. Growing up, I could not wait to go to college and escape. The separation of parent and child begins from birth. Physically at birth, the bond between mother and child is broken with the cutting of a cord and then the separation begins. If all goes well, the parents leave the child behind. But I suspect that immigration must accelerate this separation as there is not just the generational gap but also the cultural and linguistic ones. When I speak Chinese, I sound like a little kid; and my parents, while professionally they are excellent English speakers, have trouble telling a joke.

I used to lament that being an immigrant was hard. I still believe that but I cannot imagine what I would be like had my parents not moved to the States. Our journey is the source of my drive. I wish to succeed on behalf of myself but also on behalf of them. I wish to do things they could not do, make them proud, soar as high as I can. In many ways immigration fractures the family by pushing people oceans apart and spacing meetings out for years. But it can also make the immediate family stronger than it would have been. My parents and I went through a lot together and only we know the entire story. For the longest time, that story included just us, me and them, them and me.

Yet now that I am older and not so foolish, my parents and I have found new ground.

But as any foolish child, I quickly realised that I should have tried to slow down. I should have not been so loud and tried more to listen.