My Year of Rest and Relaxation review: an arresting, original read 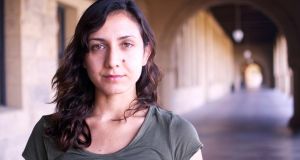 Ottessa Moshfegh: has a singular instinct for the jangled interiority of loners and outsiders. Photograph: Krystal Griffiths

Book Title:
My Year Of Rest And Relaxation

Ottessa Moshfegh’s publishers position her as an enfant terrible – the phrase is front and centre on the press materials for this, her second novel – which is, ironically, the kind of cringey move at which the narrator of a Moshfegh novel would direct a perfect, withering put-down. Moshfegh, who has published a novella and a short story collection in addition to her novels, is that kind of writer: tempting to pigeonhole and likely, then, to write an epic, uncategorisable opus from the point of view of the pigeon.

She has a singular instinct for the jangled interiority of loners and outsiders, most of them women, and for their uncomfortable and often unpretty inhabitance of their bodies. Nothing terrible or infantile about either of these things, and in the painstaking attention she pays to her misfit characters, from the namesake of her debut novel, Eileen, to the protagonists of her novella McGlue and her many superb short stories, there is a great deal more layered compassion than there is boring transgression.

Perhaps there is something shocking about the premise of My Year of Rest and Relaxation, in which a 24-year-old woman decides to take such a daily – indeed, hourly – cocktail of psychopharmaceuticals that she essentially sleeps, and sometimes sleepwalks, through an entire year. But it could also be read as a fairly common, not to mention arguably reasonable or eminently achievable, 21st century predicament. Yes, Moshfegh pushes it to a gleeful extreme, roping in a lunatic psychiatrist (“ ‘Hell? I can give you something for that,’ she said, reaching for her prescription pad”) and sprinkling a handful of invented, almost comically potent narcotics in amongst the recognisable brand names, but in this story of attempted self-erasure, the novel’s achievement is not in extremity.

The trudging banality of a character’s quest to sedate what is unbearable, and to come out the other side into some cleansed and emptied new reality: this, paradoxically, is the fun of this strange and obstinate narrative, and it is where it strikes its sharpest, clearest truth.

Along the way, there’s a lot of detail to enjoy. While it always seems a pity to see an author opt for a filthy rich protagonist rather than one whose life – the need to pay rent, to work, to survive – will throw interesting obstacles in their way, still Moshfegh writes brilliantly, and very funnily, of a certain kind of spoiled, affluent New Yorker: white, thin, blonde, a former gallery girl selling faux-radical art, “nothing to inspire more than a trip around the corner to buy an unflattering outfit from Comme des Garçons”, living on the Upper East Side in an inherited apartment with a park view, guzzling coffee and binging meds, ordering clothes from Barneys and Saks mid-blackout.

The scenes with the professionally delinquent Dr Tuttle, who happily prescribes the narrator more and more drugs, are hilarious, and a resentful continuing acquaintanceship with a more economically straitened college friend, Reva, is compulsive, if wince-inducing, reading.

What drives the narrator to her self-induced coma is a question with which she wrestles herself, a little more than is necessary; her parents died within weeks of one another when she was an undergraduate, and her mother was an Alexis Carrington-style narcissist, buried wearing a power suit and bright red lipstick. Remembering this, her daughter wonders whether, “if I unearthed her now, would the lipstick have faded?”

This kind of simultaneously horrifying and devastating glimmer, a scoop direct from the places to which the human mind plummets in private, is what makes Moshfegh’s prose so arresting, so original, and while there are many such moments, there is also a sense of strain in the larger structure of this book, as though the idea of a person’s disappearance into the recesses of their own solitude was not considered enough to carry a novel, and so explanatory factors and a purportedly plot-deepening arc were heaped on its shoulders. It doesn’t need them, and they only dilute the velvet darkness into which Moshfegh has the temerity to push her protagonist.

A subplot gleaned from the fact that the novel is set in Manhattan between 2000 and 2001, meanwhile, is utterly disposable, even unfortunate. It’s the time that the reader gets to spend in the strange, in-between space with her character that gives the greatest reward; the moments when she floats so high that her body becomes “just an anecdote, a portrait hanging in another world” when the blood drains out of her brain “like sand in an hourglass”, when she tries to medicate even her dreams, in the hope that she can only dream “low to the ground”. This is a novel of immense and yet very ordinary human sadness. That is a lot to achieve.