Emily Wilson is the first woman to translate Homer's Odyssey into English, but she would rather concentrate on what she brings to the work 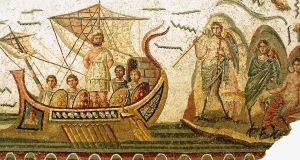 The Odyssey: Emily Wilson highlights its contemporary resonance with our pressing questions about migration, displacement of peoples after war and the treatment and welcome of refugees. Photograph: Bardo National Museum

How to begin? How to find the words, in English, for one of the oldest and most influential texts in western literature? Generations, over centuries, have attempted to grapple with the 12,000 lines of Homer’s Odyssey, from beginners learning their first words of Greek in the classroom, to classical scholars and acclaimed poets going back to Chapman and Pope.

While the story of the circuitous return of the hero Odysseus from the Trojan War seems highly familiar to us from its innumerable adaptations and variations, the language in which it was written presents a series of puzzles and multiple meanings. Even after concentrated study, it retains its mysterious aspects.

Tantalisingly so, for the British classicist Emily Wilson, who spent five years working on her new translation of The Odyssey, published last autumn by WW Norton. Accompanied by her authoritative critical introduction to the poem’s origins in the oral tradition and its reception since antiquity, it has been hailed by reviewers as a major achievement, in which she sets out to “tell the old story for our modern times. / Find the beginning.”

From its opening lines, this Odyssey grips the reader, as it shifts between registers and styles, first musical, then abrupt; contemporary to us, yet at times beguilingly strange. The narrative of Odysseus’s adventures at sea, and all he survives on his way home to Ithaca – the storms, the reversals of fortune, the transformations and tricks – is propelled by Wilson’s poetic metre, a supple iambic pentameter.

“Tell me about a complicated man,” it begins, arrestingly, and Wilson, who is professor of classical studies at the University of Pennsylvania, is highly alert to the complications, both of the Homeric poem itself and of the art of translating it.

“Each translation is inevitably an interpretation, and of its own time,” she says. “In mine, I wanted to bring out things that had been obscured, and bring different narrative perspectives to bear.”

The language is pared back, compressing rather than expanding each phrase, and matching the exact length of the original poem

Speaking from Philadelphia, at high speed and with a ready laugh, she recalls the early stages of the process. “The first decision I made was to use iambic pentameter. Recent English translations tended to be nonmetrical, either in prose or in free verse, which seemed to me to lose so much of the music, which is an intrinsic part of the experience of reading the original poem. And in such a long narrative, the metre helps to create suspense and pace.”

Writing it was a slow process of constant revision, and of rereading the original Homeric Greek, written in a six-foot verse form, dactylic hexameter. “I was frequently getting stuck, especially when there was no obvious English equivalent to a particular phrase. I shared passages with my graduate students, read them aloud, and discussed them with my editor at Norton to make sure what I was writing was idiomatic in English. I wanted this work to be accessible for many kinds of readers.”

For this reason she steered clear of “noisy linguistic fireworks” or deliberately ornate or archaic language, which we are more accustomed from other translations. Her rendering of the epithets – the repeated phrases such as “rosy-fingered dawn” used to describe the central characters and gods – keeps changing also, varying throughout the poem, to maintain freshness.

At other times her choice of words echoes and puns on the original Greek, such as “strategising”, with its origin in the Greek word strategos for a military leader or ship’s captain, and Odysseus’s suffering described as “an odyssey of grief”. Throughout, the language is pared back, compressing rather than expanding each phrase, and matching the exact length of the original poem.

The simplicity of expression is sometimes startling, bringing characters’ emotions into the foreground. When we first meet Odysseus he is trapped on the island of Ogygia with the goddess Calypso: “he wept sweet life away,” longing to return to his home in Ithaca. “By day he sat / out on the rocky beach, in tears and grief / staring in heartbreak at the fruitless sea.”

Many reviewers have highlighted the fact that Wilson is the first woman to have published an English translation, and while she welcomes the glowing critical reception of her work, she says, “I hadn’t realised how much of a big deal the first woman thing was. There is a danger of being very deterministic and reductive about this, as if a woman would necessarily read the text in a particular, gendered way, and that the dozens of translations by men are somehow nongendered, or normative.

“If this emphasis encourages more of the excellent women classicists currently working, then I celebrate that. But it does show a lack of awareness in the anglophone world of all the other translations by women of The Odyssey, into European languages.”

For Wilson, Odysseus is a multilayered, multifaceted character (or polytropos) and she resists interpreting him as a symbolic or allegorical figure, one whose journey might be as much internal as external.

This poem of homecoming does not mean geographical homecoming only; it means reconstructing relationships and identity

“There have been allegorical readings of The Odyssey since antiquity, especially proto-Christian, neo-Platonist ones, which are interesting to me, but not how I read it. I think that this strips Odysseus of his humanity and the poem of some of its richness.”

Her understanding of Odysseus chimes much more with our contemporary idea of having multiple selves and self-constructed identities.

“Also, as I went on, certain things came into focus. I became less aware of a single protagonist, Odysseus, and increasingly conscious of all the perspectives and voices we get in the poem, including those of the gods and goddesses, and the web of social relationships. This was a complexly imagined society, depicting disparate life experiences, including those of the slaves.”

She chooses the word “slave” rather than the more customary “servant”, and tilts the reader’s lens in other ways too: avoiding importing sexist language from today that is not in the original, and having the Cyclops, who is carefully not referred to as a savage, calling accuse Odysseus and his men of being “pirates”.

This episode is one of many instances of the elaborate rules of hospitality (or xenia) being observed or violated, which, for Wilson, is one of the most important themes of the poem.

Her introduction highlights its contemporary resonance with our pressing questions about migration, displacement of peoples after war, the treatment and welcome of refugees and strangers and the meaning of belonging and of home.

“It is a poem exploring the household, the home, rather than only the nuclear family relationship of Odysseus, Penelope and Telemachus. And this poem of homecoming does not mean geographical homecoming only; it means reconstructing relationships and identity. He may reach Ithaca halfway through the poem, but at what point does Odysseus actually come home?”

She will be in conversation with Dr Martine Cuypers at the Seamus Heaney HomePlace, Bellaghy, Derry, on Sunday, July 22nd, at 3pm; seamusheaneyhome.comLughnasa FrielFest 2018 will present performed readings from Emily Wilson’s translation of The Odyssey on beaches in Derry and Antrim (August 9th-15th) and in Donegal (August 10th-19th); artsoverborders.com