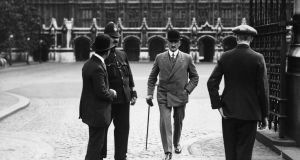 Oscar Slater at Westminster following his release from prison 19 years after he was wrongly convicted of murder – the subject of ‘Conan Doyle for the Defence’. Photograph: Davis/Topical Press Agency/Getty Images

Martyn Waites is the author of a number of powerful novels under his own name and a commercially successful set of books under the pseudonym Tania Carver. With The Old Religion (Zaffre, £12.99) he is back to himself and at the beginning of a new series featuring former undercover cop Tom Kilgannon, who is in the witness protection programme, hiding out in a bleak Cornish village: “Hardly anyone came to St Petroc who didn’t live there. And hardly anyone came to live there.” When a 17-year-old runaway from the local new age travellers’ commune breaks into his house and steals the wallet containing the details of his new identity, Kilgannon finds himself embroiled in a case that spirals from a missing boy to a Wicker Man-style eruption of witchcraft and ritual magic. Waites deftly plaits the traditional elements of the detective story with the occasionally ripe but often chilling spells and summonings of the old religion. An astute Brexit analogy lends the villagers’ collective delusion gruesome topicality in this well-told, immensely satisfying tale of contemporary folk horror.

Crime writers have long been beguiled by the Jacobean playwright John Webster’s dark, unsettling vision – Agatha Christie drew on The Duchess of Malfi for Sleeping Murder, as did PD James in The Skull Beneath the Skin, while James’s first novel, Cover Her Face, took its title from the same play. Now Domenic Stansberry has had the inspired idea of transposing Webster’s first great tragedy to present-day Rome, and the result, The White Devil (Weidenfeld & Nicholson, £8.99) is a glittering noir triumph. I say present day, but despite the narrator Vittoria’s disavowal, the action unfolds very much in a 1950s Rome of her imagination, “full of motor scooters and ruins, an endless film set where I might wander in a sleeveless dress, immune to heat and noise”. The plot is uncannily faithful to the original: Vittoria here is a minor actor, unusually close to her disreputable brother Johnny, who brokers her affair with Paulo Orsini, a wealthy Italian senator whose beautiful wife, Isabella, is a much-loved screen legend. Isabella and Vittoria’s husband, a broken-down writer called Frank Paris (the names alone are a delight), are soon dispatched and scandal swirls about the lovers, with paparazzi, politicians and a vengeful cardinal all playing their parts.

“The rules of the Crave were simple,” Mike Hayes assures us at the beginning of Araminta Hall’s disturbing, immersive Our Kind of Cruelty (MCD FSG, $26). Verity – V – flirts with a stranger in a nightclub while Mike watches; when she tugs on the silver eagle she wears around her neck, Mike pushes through, the stranger fades away and Mike and V have celebratory sex in the nightclub bathroom. Mike sculpts his body and designs his house to V’s specifications. But when he goes to work in New York for a year, V breaks up with him and soon announces her engagement, even inviting Mike to the wedding. Mike isn’t fooled, however. He knows this is all an elaborate game, the Crave taken to its ultimate level. If he watches V closely enough, he’ll spot the secret signs meant for him alone and spring to her rescue.

Told solely from Mike’ s point of view, Our Kind of Cruelty is an uncommonly well-written chronicle of obsessive love, psychological frailty and societal misogyny that merits comparison with Patricia Highsmith at her finest and most frightening. Not only does Hall keep you guessing, she leaves you wondering quite how she has pulled off such a psychologically complex tour de force.

Andrew Martin’s The Martian Girl (Corsair, £14.99) is a tale of two women: Jean, a failing journalist in her late 30s, anxious to find her place in the world, and Kate French, a music hall mind reader known to turn-of-the-century London audiences as the Martian Girl. Jean becomes preoccupied with writing a novel based on Kate’s relationship with her stage partner, a sinister older man. Meanwhile Jean’s irresistibly handsome married lover, Coates, is dwindling into a sinister older man himself, ready to believe Kate’s writing is a secret indictment of his all-too-real transgressions. The novel Jean is writing increasingly becomes the ingeniously constructed novel we are reading, and even the self-reflexivity has a twist in the tail. Andrew Martin’s wry, amused tone is a constant joy: “Being with Coates was like having mild flu: you spent most of your time sweating slightly in bed, and when you got out of the bed, you felt shivery and keen to get back into it.” An altogether superior performance, The Martian Girl is a violent, funny, deadly serious entertainment.

“In Glasgow at the turn of the twentieth century there lived an old lady whom few people liked.” So begins Conan Doyle for the Defence (Profile, £16.99), Margalit Fox’s masterly investigation into the case of Oscar Slater, who was wrongly convicted of the murder of Marion Gilchrist, the old lady in question, and Sir Arthur Conan Doyle’s successful quest to prove Slater’s innocence. What’s especially compelling about the book is its exploration of the methods Conan Doyle used to exonerate Slater, for they are the same methods – “the identification, discrimination and interpretation of barely discernible clues in order to reconstruct an unseen past” – made famous by Conan Doyle’s great fictional creation, methods described memorably by Holmes himself as the ability to “reason backward”.

Encapsulating class bias, sexual prudery, xenophobia and anti-Semitism, the Slater case straddles the twilight of 19th-century gentility and the dawn of 20th-century modernity. It may not have its own podcast, but Conan Doyle for the Defence is the best true crime book you will read this year.

Through Hollow Lands (Urbane, £8.99) by Thomas Paul Burgess, is billed as “an allegory on the death of American innocence”. Set in a phantasmagoric Las Vegas on September 11th, 2001, George Bailey, miraculously escaped from UA Flight 93, must deal with the hectic consequences of his not-so-wonderful life. In a comic register pitched somewhere between John Dufresne and Scott Bradfield, with sexual politics baked sometime in the early 1980s, Through Hollow Lands is an inventive, extravagant, high-energy thrill ride of a book.