Here be plausible dragons: The appeal of fantasy set to reality 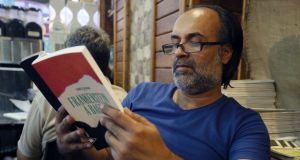 Iraqi writer Ahmed Saadawi: the monster in his book “Frankenstein in Baghdad” was conjured not through scientific recklessness but in response to the great psychic howl emitted by the occupied city. Photograph: Ahmad al-Rubaye/AFP/Getty

The backlash against Guillermo del Toro’s The Shape of Water threatened to become a tsunami of disapproval when the movie won the Oscar for best picture. How farcical – how tragic – that a film about a woman falling in love with an amphibian should claim the industry’s starriest accolade, went the grumbles. As the Shape haters lined up to hurl their rotten fish-heads, it seemed to escape them that del Toro was employing a fantastical premise as a prism through which to interrogate the human condition. We are all, the movie argued, lonely fishmen hanging in the deep, desperate for a connection.

That fantasy or science fiction can serve as a cracked mirror through which we catch refractions of the real world may still be a novelty in cinema (50 years after 2001: A Space Odyssey it surely shouldn’t). In literature, the allegorical possibilities of genre writing are, by contrast, long established. And while there are no love-struck amphibians in Tom Sweterlitsch’s The Gone World (Headline), this ambitious hybrid of detective novel, space opera and end-of-the-world rumination similarly taps a universal anxiety – in this case, fear of mortality and the unknown that waits on the other side.

It’s 1997 and a family has been horrifically murdered in small-town America. The father, a Navy Seal, has vanished, along with his daughter, the only other survivor. Naturally he’s chief suspect. The investigation into the killings is led by Shannon Moss, part of a “clandestine division” within the Naval Criminal Investigative Service (NCIS). As she delves into the suspect’s past, hunter and hunted are revealed to share a devastating secret.

The monster in her livingroom is, in fact, a postmodern second coming of Victor Frankenstein’s creation

Sweterlitsch who has co-written several short films with director Neill Blomkamp, demonstrates considerable dexterity in interweaving the procedural and metaphysical components of the story. Splicing apocalyptic drama and Agent Dale Cooper-style sleuthing shouldn’t work. He carries it off with something approaching a flourish.

The interaction between the banal and the unreal likewise informs Frankenstein in Baghdad (Oneworld), by Iraqi poet, novelist and screenwriter Ahmed Saadawi. The book, winner of the 2014 International Prize for Arabic Fiction, is a meditation on how the psychodrama of war can leech through the walls and up through the floorboards. It is set in 2005, the darkest days of America’s post-Saddam occupation of Baghdad, and the elderly widow Elishva, quietly unhinged by the death of her son, Daniel, decades previously, has welcomed into her home a shambling creature which she takes to be her boy, risen and returned to her.

The monster in her livingroom is, in fact, a postmodern second coming of Victor Frankenstein’s creation – a tragic parody forced to live a life for which it never asked. The difference is that this creature was conjured not through scientific recklessness but in response to the great psychic howl emitted by a city required to suppress the reality of war and occupation in order to retain its sanity. One part magic realist fairy tale, two parts hallucinatory horror, Frankenstein in Baghdad is an unmooring portrait of a society driven to waking dreams by ceaseless violence.

In Bolander’s retelling, the company’s owners hire sentient elephants in place of women

Also with a foot in the real world is Brooke Bolander’s The Only Harmless Great Thing (Tor), an alternate history connecting the dots between industrial scandal in turn-of-the-century New Jersey and the electrocution, at the behest of Thomas Edison, of Topsy the elephant at a Coney Island zoo in 1903.

The tale is narrated by Regan, one of the New Jersey “radium girls” whose tragic story is ripped from the historical records. The Radium Girls were female factory workers who developed radiation poisoning painting watch dials with radioactive luminous paint in Newark, New Jersey. The right of individual workers to seek damages from companies was established under US law in the ensuing court case.

In Bolander’s retelling, the company’s owners hire sentient elephants in place of women and task Regan, the last surviving human on the factory floor, with their training. Topsy is her final student and their relationship takes a turn for the worse. Bolander, whose Our Talons Can Crush Galaxies was nominated for the 2017 Hugo Award for best short story, writes in treacly prose which makes for occasionally heavy going. But she plucks adroitly at the heartstrings and the tragedy of Regan and Topsy’s friendship is searingly conveyed.

More conventionally fantastical is Sean Grigsby’s Smoke Eaters (Angry Robot), set in a contemporary United State which has been invaded by dragons. Grigsby is by day a fireman in Arkansas and the novel reads, in part, as a pean to his colleagues. Cole Brannigan is a hard-bitten hero cliché – Clint Eastwood meets Robert de Niro in Backdraft. Days from retirement it’s discovered that he’s immune to dragon smoke and, against his will, is co-opted into an elite anti-dragon force, the eponymous Smoke Eaters.

The set-up isn’t exactly original – the Wicklow-set Christian Bale snooze-fest Reign of Fire similarly gave us a 21st-century overrun with dragons. But Grigsby’s world is vividly rendered and full of engaging detail (dragons don’t have wings as in the stories, their victims linger on as ghostly spirits). As a romp, it delivers by the gallon drum.