Fenianism: a hard movement to pin down

Soldiers of Liberty: A Study of Fenianism 1858-1908 review: Eva Ó Cathaoir extends to the memoir literature more credibility than others have to date 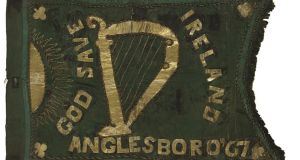 Fenians and Fenianism are important to Irish history and the history of Ireland’s diaspora, particularly in the United States. That much is not in doubt. Monuments commemorating the Manchester Martyrs punctuate city, town and village centres throughout the country and for many years served as the focus of a vibrant nationalist commemorative culture.

To this day, no locations prove more affecting for Irish history students visiting Dublin for the first time than the cluster of Fenian graves in Glasnevin cemetery. Festooned with Fenian symbols, those stones can evoke a solemn response, helping to make the Fenians relatable. But does the power of this symbolism make Fenianism any more historically explicable? Historians have long recognised the galvanising effect funerary ritual had on Fenianism’s development. The decision to transfer the remains of the Young Irelander Terence Bellow MacManus from New York to Glasnevin in 1861 was a tactical masterstroke.

More difficult to answer is whether the thousands of men and women who paid their respects to the body as it lay in state at the Mechanics Institute in Abbey Street or turned out to watch the funeral cortege proceed through Dublin’s streets necessarily manifested a revolutionary separatism.

In the same way, the prominence of well-known Fenians at Charles Stewart Parnell’s funeral in October 1891, a political spectacle as important as it was uncertain in its meaning, reflected as much the tensions as it did the unity that animated Parnell’s last coalition – a legacy John Redmond would struggle to manage for the next 25 years. Circumstances changed later. The strategic credulity that allowed constitutional nationalists to present home rule as Fenianism by other means was no longer plausible in 1915 when Patrick Pearse delivered his famous panegyric at the graveside of the Fenian Jeremiah O’Donovan Rossa. That day, he effectively announced the forthcoming rebellion. Not that Dublin Castle noticed the shifting importance of Fenian encomium.

As Eva Ó Cathaoir shows in this chronicle of Fenian doings between 1858 and 1908, Castle officials in the mid-1860s were less complacent. Intelligence sources, which depended on informers and police spies, suggested that 1865 would be the “year of action”. Whether or not James Stephens, the Head Centre, really planned a revolutionary outbreak that year or simply sought to mollify impatient Irish-American backers with big talk is open to debate, but Ó Cathaoir’s research on the papers of senior British officials suggests much about the thinking of the official mind.

Civil servants and their politician masters were frustrated by the brilliance with which the Irish People, the revolutionary newspaper run by Fenian luminaries like John O’Leary and Charles Kickham, exploited British liberties. They were equally disturbed by the possible implications of a co-ordinated transatlantic Fenian action at a time when British-American relations were already worsening. At the same time, the liberal principles underpinning the British state made its officials reluctant to act, though in the event sufficient cause was found to have the newspaper raided, arrests made and, with the suspension of habeas corpus, numerous Fenian suspects interned.

Trials and sentencing followed, as did cruel and degrading treatment at Chatham, Portsmouth and Dartmoor. Subsequent campaigns for the release of imprisoned Fenians gave activist focus to an organisation ill-prepared for revolutionary action, as was also the case in the 1880s and 1890s following the conviction and imprisonment of Tom Clarke, John Daly and other “dynamitards” of criminal offences.

When Fenianism became subject to judicial processes it became historically legible, generating much of the source material that allow its history to be written. This equally explains why it remains such an elusive subject. As an oath-bound, clandestine organisation committed to the achievement of an Irish Republic through force of arms, Fenianism did not leave institutional records. There are no minute books, membership lists and no official Fenian correspondence.

Technically, there was not even a Fenian organisation but instead the Irish Republican Brotherhood, though this depends whether the subject is the Irish or Irish-American variant of the phenomenon. In any case, we are significantly dependent on official material, including police reports and judicial records, though this can be augmented with newspaper reports (often allusive) and, of course, Fenian memoir, which was often as hyperbolic as the view from Dublin Castle was deflating.

Arbitrating between these types of evidence can lead to judgments that as much reflect the temperament of the historian as they do any deeper methodological process. Ó Cathaoir extends to the memoir literature more credibility than some historians have allowed while also taking full advantage of the hundreds of relevant files held by the national archives of the Republic of Ireland and the UK.

As is demonstrated, the historical legibility of the Fenian rank and file is especially dependent on the lists of “suspects” found in these files and the dividend is most handsomely paid in the extraordinary biographical conspectus of Fenians from Munster and Kilkenny that closes Soldiers of Liberty. Filling 100 pages of double-columned print and reaching 1,000 entries, this represents a massive feat of historical labour and will prove valuable to future historians of Fenianism. The scattering of Fenian women that appear in the list are particularly suggestive.

However this dictionary of Fenian biography is not made subject to sustained sociological analysis, neither is the promised focus on how Fenian networks functioned quite delivered, despite the promise of an analysis focused on “friendship and kinship alliances”. Ultimately, Soldiers of Liberty adds much detail to what we know of Fenianism but does not offer a new interpretation of Fenianism. Consequently, the absence of an Ó Cathaoir thesis makes the repeated dismissal of Vincent Comerford’s “patriotism as pastime” thesis grating, not least because Comerford’s argument is inadequately summarised and justice is not shown the subtlety of his full-length study The Fenians in Context: Irish Politics and Society, 1848-82 (1985), still the finest work of historical interpretation of Fenianism in its mid-Victorian heyday.

Similarly, and here I should declare an interest, little account is taken of post-Comerfordian interpretations of Fenianism, notwithstanding the extremely terse reference made to several recent texts in the introduction. No historian is an island and Ó Cathaoir could have been more generous in integrating into her text what is now a strong body of work based on many of the same archival materials. Still, Soldiers of Liberty provides an unprecedentedly rich sense of who the Fenians were, making it an essential building block for future interpretations of what Fenianism was.