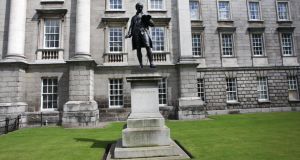 Oliver Goldsmith: a key figure that helped Ireland take its place among the nations of the Enlightenment.

By the front gate of Trinity College Dublin, pedestrians stroll past two bronze statues. On the left, as you face the entrance, stands Edmund Burke. On the right stands Burke’s friend and Trinity contemporary, Oliver Goldsmith. The contrasting depictions of the two men are suggestive: whereas Burke’s imperious gaze sweeps across College Green, Goldsmith, with a pen poised in his right hand, casts his gaze diffidently down at the book he is reading. Burke’s luxuriant curls show up Goldsmith’s balding pate, and his insouciant swagger is signalled by the nonchalant hand on his hip, chest puffed out, while Goldsmith leans deferentially backwards.

With admirable prescience, John Henry Foley’s 19th-century statues anticipated the relative fortunes of Burke and Goldsmith within the field of Irish studies and indeed 18th-century studies more widely. Burke is held up as one of the great statesmen of British parliamentary history and often nodded to as the finest writer of political prose in the English language; journal articles, biographies and critical editions of his speeches and letters have flourished in recent decades and his legacy is debated across the fields of political philosophy, history and literary studies.

Goldsmith, on the other hand, did not fare so well in the 20th-century academy although he can lay claim – uniquely among Irish and British writers during a very rich literary century – to having penned masterpieces in all three of the major literary genres: prose fiction, poetry and drama with The Vicar of Wakefield (1766), The Deserted Village (1770) and She Stoops to Conquer (1773). Largely dismissed by influential Irish literary figures such as Daniel Corkery, Seamus Deane, Yeats and Joyce for being something of a “court jester” to the English (Joyce), he has equally been overshadowed in Anglo-American criticism by a focus on others within his London social circle: in addition to the magisterial Burke, Goldsmith was intimate with literary kingmaker Samuel Johnson, actor David Garrick, painter Joshua Reynolds, theatre manager George Colman and poet (and Goldsmith’s first biographer) Thomas Percy.

But the shy, physically unprepossessing immigrant from the Irish midlands, buried in the heart of London’s inner Temple and commemorated in Poets’ Corner, Westminster Abbey, is finally getting his due recognition. Recent scholarship has emphasised Goldsmith’s Irish heritage and networks in London. Scholars such as Norma Clarke, Michael Griffin, Declan Kiberd and Jim Watt have connected Goldsmith with a new framing of 18th-century culture that brings the importance of cosmopolitan sociability to the fore. He is increasingly seen as a key figure that helped Ireland to take its place among the nations of the Enlightenment.

With the forthcoming publication of his collected letters in a first modern critical edition, scholarship will have another resource with which to appraise Goldsmith’s canonical credentials. The letters give us access to Goldsmith’s interior voice – or at least as close as one can hope to get – at key moments of his intellectual development from his time at medical schools in Edinburgh and Leiden through his two decades of literary life in London.

Moreover, there is much that will resonate with any Irish migrant finding themselves for the first time in that “Mecca of every young aspirant to fiscal distinction” as Beckett’s Miss Counihan exclaimed of London. London today is a city of prodigious size, diversity and population but in the 18th century its distinctiveness on these counts was even more marked – then, it was 10 times the size of Paris. When Goldsmith got off the boat and arrived in London in 1756 after his years walking around Europe, this metropolis was overwhelming.

The first letter he wrote to his brother-in-law, Dan Hodson, who had sponsored his medical education in Scotland, was candid about the difficulties he faced as an Irishman trying to forge a career. But we also get a sense of his grit:

“You may Easily imagine what difficulties I had to encounter, left as I was without Friends, recommendations, money, or impudence and that in a Country where my being born an Irishman was sufficient to keep me unemploy’d. Manny in such circumstances would have had recourse to the Friar’s cord, or suicide’s halter. But with all my follies I had principle to resist the one, and resolution to combat the other.”

This was doubtless sobering for him to write and his brother-in-law to read. But Goldsmith, whose career was made through his capacity to adopt a plethora of voices to offer thoughtful critique of the British political system and its nebulous platitudes to “liberty” (which Goldsmith read as largely masking the venal self-interested tendencies of a new and egregious commercial class), could equally critique Ireland’s shortcomings too with characteristic verve and wit:

“Let me ask myself what gives me a wish to see Ireland again? The country is a fine one perhaps? No! There are good company in Ireland? No; the conversation there is generally made up of a smutty toast or a baudy song. The vivacity supported by some humble cousin, who has just folly enough to earn his-dinner. Then perhaps there’s more wit and learning among the Irish? Oh Lord! No! there has been more money spent in the encouragement of the Podareen mare there in one season, than given in rewards to learned men.”

Despite its daunting environs, London presented Goldsmith, like so many Irish men and women of the period and since, remarkable opportunity. He got his start as a reviewer and slowly built a name for himself until the publication of his acclaimed philosophical poem The Traveller (1764) catapulted him into public view; the major works that followed put him among the first rank of writers in the English language. The trajectory of his career, thus described, seems straightforward and inevitable. But the letters, revealing his gloominess, self-doubt and reflections on alternative careers (he interviewed unsuccessfully to be a ship’s surgeon on a voyage to India in 1758), give us a richer sense of the difficulties of his daily grind and the true measure of his achievement.

This Goldsmith has to write to newspapers defending himself against accusations of plagiarism. He pleads and cajoles George Colman into staging She Stoops to Conquer. He copes with accusations of political bias in his historical writings (it is perhaps little known that Goldsmith was the first professor of history of the Royal Academy). He negotiates the world of high-society masquerade, all the while dealing with financial problems and producing a tremendous amount of copy across an impressively broad range of subjects for London booksellers and periodicals. The 66 letters that cover the years 1752 to 1774 are an extraordinary window into the 18th-century immigrant experience as well as a marvellous account of his journey from anonymous hack writer to a literary star feted by London.

The final letter we have in Goldsmith’s hand is brief and poignant, apologising to Dubliner Isaac Jackman for being unable to keep their appointment “as he finds himself too ill to Stir abroad”. He died about a month later. Jackman, who became a minor literary figure himself, was recently arrived in London and that Goldsmith was one of his first port of calls tells us something of the latter’s status amid the diaspora.

Anecdotal accounts abound of Goldsmith’s kindness to newly arrived Irish migrants; the letters also reveal his connections to and understanding of the Irish literary world, past and present. He never forgot his own initial difficulties when he came to London and he felt an ethical obligation, strongly mindful of the Irish culture of hospitality, to do what he could for those that followed.

Despite the misgivings of Joyce and others, Goldsmith was an Irish writer for Irish writers of the period; not a jester for the English, he was rather pestered by the Irish who saw in him the cosmopolitan success they aspired to themselves.

David O’Shaughnessy is associate professor at the school of English, Trinity College Dublin. With Prof Michael Griffin, University of Limerick, he is the co-editor of The Letters of Oliver Goldsmith, published this month by Cambridge University Press