Anna Burns brings intimacy, insight and laughter back from the beyond to Belfast 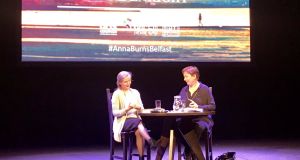 Anne Enright said of Anna Burns’ Milkman on stage at Belfast’s Lyric Theatre last night: “It has this amazing international reach. It manages that alchemy that Irish books are so good at, of turning our difficulties and our shames into some strange kind of glory.”

“Hiya everybody.” It may not be how a Man Booker Prize winner introduces themselves in London, or in New York, but it was perfect for Belfast.

Six months after becoming the first writer from Northern Ireland to win the Man Booker Prize, Anna Burns was home.

Tickets for the “In Conversation” with Anne Enright at Belfast’s Lyric Theatre had sold out almost instantaneously; the capacity crowd was virtually a Who’s Who of the North’s literary scene.

Unsurprising, then, that there would be a warm welcome for their – our – latest literary superstar. As Enright put it, introducing Burns: “There is something so utterly local about the voice it couldn’t have come from any other town … or any other writer or narrator.”

And yet, Enright said of Burns’ Booker-Prize winning novel, Milkman, “it has this amazing international reach. It manages that alchemy that Irish books are so good at, of turning our difficulties and our shames into some strange kind of glory.

Burns bestowed that gift on her audience four times during the evening. Read in her Belfast accent, her sharp, almost spiky delivery mirrors the cadences of her narrator’s speech perfectly.

She insists to Enright that her characters emerge of their own accord; when Enright points out that the men are often individual characters but the women tend to come in groups, Burns replies: “They came like that and the women didn’t.”

Of Milkman she says: “It’s a girl’s telling me her story.”

“Jesus, I wish it would happen to me,” laughs Enright.

When Enright points out the “nots … there’s an awful lot of notness in the book”, Burns responds: “I wasn’t doing that, that was her.”

On an analysis of theme, she is equally quick to absent herself: “When I write I don’t intend anything, I just write what comes.

“I think it’s for other people to do that if they want to do that. I’m more interested in getting the world of the fiction true to itself.”

It is no secret that the unnamed “community” in Milkman is the Ardoyne of Burns’ childhood. Much of the novel draws its inspiration from her own experiences; when Burns reads the passage about the teacher at night class who forces her reluctant students to consider that the sky might be colours other than blue, she reveals that this had its origins in an inspirational teacher of her own – Pat McCann – and that her former teacher is in the audience.

The point of the story, Burns says, is that it illustrates “how hard it is to change, to expand, if you’ve not been taught that it is possible”.

She cites the example of the hills overlooking Belfast: “We never looked at the hills. You stand in the middle of Belfast and we never really looked at these gorgeous hills … they were just something I couldn’t take in.”

Of her narrator’s habit of “reading-while-walking”, she admits “I did read while walking, and I did get a lot of people saying to me, ‘you’re that girl who reads and walks’.

“I was identified by doing that, and that surprised me.”

In the novel, this habit is seen as more dangerous than Semtex, even though of the two the explosives clearly carry the greater potential for actual danger.

“She is a beyond and the beyond are dangerous,” explains Burns. “It’s about what is seen as dangerous compared to what is dangerous.”

Such is the benefit of the Belfast setting: when she talks of the hobby horse – or, as she thought, the happy horse – man, there are murmurs of recognition from those listening; when she quotes “the oul’ over the water doubletalk”, or indeed mentions Semtex, there is understanding rather than explanation.

It is a mark of the audience’s engagement that when the discussion turns to “the saddest part of the book” – the breakdown in marital relationships – there is a palpable hush.

“I think that is people afraid of their feelings, their desires,” says Burns. “It’s a fear of happiness, in case it goes away, so I’ll just be miserable to be safe.”

It feels almost like a confidence shared by a friend. Such has been the atmosphere throughout; on the Lyric’s stage, Burns and Enright could be two actors in a drama, two writers chatting in a coffee shop.

Anna Burns brought laughter, intimacy and insight to Belfast; it came as no surprise she left to a standing ovation.