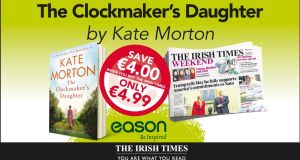 Coming up in this Saturday’s Irish Times, Bernard-Henri Lévy talks to Lara Marlowe and Ian McEwan is interviewed by Jonathan McAloon. John Boyne writes about tackling transgender issues in his new YA novel My Brother’s Name Is Jessica; Pádraig Kenny explores the powerful influence of the pop culture of his youth and the value of boredom to a writer; and Sheila O’Reilly explains what it is to be a bookshop mentor.

Reviews include Alan Murrin on The Language of Birds by Jill Dawson; Ian Hughes on Living Well at Others’ Expense by Stephan Lessenich; Chris Kissane on Protestant and Irish edited by Ian d’Alton and Ida Milne; Manchán Magan on The Way Home by Mark Boyle; Éilís Ní Dhuibhne on The Cruelty of the Gods by Carlo Gébler; Mihir Bose on The Patient Assassin: A True Tale of Massacre, Revenge and the Raj by Anita Anand; John Boyne on My Enemy’s Cherry Tree by Ting-Kuo Wang and Harold Goldblatt; Helen Cullen on Remembered by Yvonne Battle-Felton; Martina Evans on Frans de Waal’s Mama’s Last Hug: Animal Emotions and What They Teach Us about Ourselves; Sarah Gilmartin on Love Notes from A German Building Site by Adrian Duncan; and Rob Doyle on The Fight by Norman Mailer.

What’s that? You want more? Very well, you can also save €4 on the cover price of The Clockmaker’s Daughter by Kate Morton when you buy The Irish Times in any Eason store this weekend.