What's a protest arts group backed by a rich Russian doing in Tallaght? 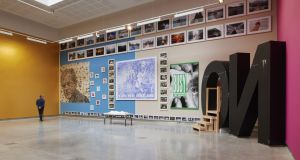 The piece was an action that took place at El Gallo Arte Contemporáneo in Spain. A video of it is in the collection of Tate.

Is this opportunism? Exploitation? Where do you start with what’s wrong with it?

Or perhaps you start by asking what’s wrong with society. You take your outrage to the root of the problem, rather than focusing on an artist who is forcing you to see what’s so twisted in our world. In an age of outrage, and as fringe political movements use shock to gain the traction of airtime, the role of art as a provocation has become a little muddied.

An image from Sierra’s action will be on show at Rua Red in Tallaght, as part of How to Say it the Way it Is!, an exhibition marking the start of a year-long partnership between Rua Red and a/political, a London organisation that has activist art at its heart.

The exhibition features works from the a/political collection, which includes Sierra, Ai Weiwei, Andres Serrano, Barbara Kruger, Leon Golub, John Heartfield, Andrei Molodkin and Shirin Neshat. It has been put together by another a/political artist, Franko B. But what exactly is going on when an arts space in Tallaght hands over the majority of its annual programme to another organisation? Who are a/political, and what can we expect from the exhibition?

Rua Red director Maolíosa Boyle insists the arrangement isn’t a handover, but a partnership. She first came across a/political in her role as director of Derry’s Void contemporary art gallery, when commissioning work as part of the city’s 2013 UK City of Culture.

With projects by Sierra (Veterans and Psychophonies), and Molodkin (Catholic Blood), Boyle was struck, not only by the reach of a/political’s artistic relationships, but by the organisation’s ability to make things happen. Molodkin’s Catholic Blood was a recreation of the Rose Window at London’s Houses of Parliament, filled with blood donated solely by Catholics. In a previous work, he mixed the blood of Russian soldiers with Chechen oil.

“There’s a similarity between Derry and Tallaght,” says Boyle. “You don’t have a natural visual arts audience in either. A/political are always looking for the right kind of spaces to show their work. You’re on a constant kind of adventure with them. You’re drawn in to it.”

The first iteration of the adventure also includes Sierra’s No Global Tour. A large sculpture of the word “NO” is travelling Ireland, stopping at significant sites. “Direct provision centres, the site at Tuam . . . ” says Boyle, listing off places with which we should be justifiably uncomfortable.

Another a/political artist, Petr Davydtchenko, will be in Ireland for the inaugural exhibition, and will also hold a workshop. Based in the organisation’s experimental arts space and production site in France (the Foundry in Maugbourguet), Davydtchenko has made a practice of survivalism. Essentially, he has been living on roadkill, although that, according to a/political director Becky Haghpanah-Shirwan, is a little too reductive.

“The work is about the transformation of a working member of society into a self-sustaining scavenger, detached from the global economic system, only eating animals that have been killed by man-made machines and produce that has been rejected by society,” she says.

In addition to collecting, a/political also funds projects, which sounds like every artist’s dream: to be approached by an arts foundation with the question, what have you always wanted to do? What had you always thought was impossible?

For Sierra, it was to plant the black flag of anarchism at both the North and South Poles. For Russian sculptor Erik Bulatov, it was to create four 10-foot-tall sculptures, spelling out the word “Forward” in Cyrillic letters, a piece that was unveiled outside Tate Modern to mark the centenary of the Russian Revolution.

Do any Irish artists feature in a/political’s collection, or in the list of artists with whom they would like to work in the future? “We’re a very young collection and so by no means complete, so we’ve no Irish artists,” says Haghpanah-Shirwan. She is cagey about whether that will change, though she says she hoped studio visits would be on the agenda during the year. “We’ll be able to collaborate with groups on the ground. So it’s not like a London-based organisation coming in and not working with the local.

“How we choose our artists is through the work. If the work affects us, both mentally and physically, something that puts you out of your comfort zone, outside their comfort zone . . .”

A/political is privately financed by London-based Russian entrepreneur and hedge fund manager Andrei Tretyakov, who founded the a/political Foundation. In 2009 he opened the Orel gallery in London. Its inaugural exhibition featured Molodkin, but the focus then shifted.

“We’ve noticed that the artists we feel are doing the most important work don’t have the support or representation needed,” says Tretyakov in explanation. “Also, museums and public institutions have soft exhibitions, as they have their board of trustees to please. There didn’t seem to be a platform for outspoken artists so we opened a/political to be that platform.”

Coming from a family of art collectors, Tretyakov says that his move to London catalysed his interest in art. “Artists can change the world. But it’s not about individuals. It’s about creating a mode of art that forces people to change the status quo . . . Growing up in a capitalist system, they force us to confront this normality and question whether it truly is the right way.”

If the idea of an arts organisation resourced by the profits of a hedge fund manager as a force to fight capitalism gives you pause, it’s actually the sort of paradox on which the art world thrives.

The Dia Art Foundation pioneered the support for Land artists in the US who were protesting the commercialisation of the art world, and also concerning themselves with the emerging ecological movement. It was based on the fortunes of the Schlumberger oil company.

“Artists can change the world,” says Haghpanah-Shirwan, taking up the transformative theme. “Some of the artists we work with, they’ve got this antenna – they see things, they can sense the spirit of the time, the time of the future, and that’s a really important thing that we tend to encourage. But they don’t need to have that pressure on them.”

“The world is ready for a change in leadership,” says Tretyakov. “A new generation of perspectives is needed to shake up outdated political discourse and deep-set power networks. This is true for politics and the art world. That’s what needs changing, but at the end of the day, all you need is love.”

Yes, love, plus a dose of disturbing, disruptive shock tactics, a space to show the art, and a large chunk of money; Rua Red promises to become an even more interesting place over the next 12 months.

While a/political focuses on works that push both artist and audience out of their comfort zones, it’s long been a rich, and extreme theme in art. The 1970s seem to have been a particularly troubling time.

Chris Burden: Shoot (1971). This piece saw Burden being shot in the arm with a .22 rifle by his assistant from a distance of 16ft. In Trans-Fixed (1974) the artist lay on the bonnet of a VW Beetle, and had nails hammered into his hands, as if crucified. Some trace these works to a childhood experience where, at the age of 12, he had emergency surgery without an anaesthetic. In later years Burden turned to sculpture. David Bowie and Laurie Anderson both wrote songs about him.

Marina Abramovic: Rhythm 0 (1974). In what is probably the most famous of this performance artist’s works, Abramovic invited the public to use a series of objects on her, as they chose. Testing the limits of both artist and audience, these ranged from a rose to a whip, honey to a scalpel, and also included a gun. At the end of the piece, thorns had been stuck in her stomach, and the clothes cut from her body. More recently Abramovic has been accused of becoming too populist. Indeed, she has just launched a limited-edition macaroon with Kreemart and Ladurée. Apparently they leave a blue stain on your tongue.