Francisco Goya and ‘the greatest anti-war manifesto in all art’

Artist anticipates the approach of war correspondents and photographers 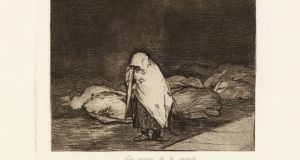 Around 1810, the pre-eminent painter at the Spanish court, Francisco Goya, was in his 60s and had been quite deaf for many years when he began to work on a series of etchings, eventually numbering over 80, now known as The Disasters of War.

The first group of completed etchings bore the title “Sad forebodings of what is going to happen”. Going to happen, that is, following an ill-fated political deal between Spain’s ruling Bourbon regime and Napoleon Bonaparte, a deal that quickly unravelled and led to a French invasion and occupation. The long, bitter Peninsular War that ensued pitted Spanish irregulars against a formidable French military machine.

It also drew the decisive involvement of British forces under the leadership of General Arthur Wellesley, the first Duke of Wellington. After the French were eventually defeated, Goya was to make an exceptionally fine portrait drawing, and from it a much more formal and formulaic painting, of Wellesley.

Having lived through years of conflict, famine and the aftermath of war, Goya’s eventual descriptive title for his etchings was “Fatal consequence of the bloody war against Bonaparte in Spain. And other extreme caprices.”

A simplistic view might suggest that Goya naturally sided with the hapless Spaniards fighting a fierce guerilla war against the most imposing military force of the day. That’s the standard interpretation of his great 1814 painting, The Third of May, 1808, an imaginative recreation of the execution of Spanish civilians outside Madrid by French soldiers.

But there is nothing propagandist about the Disasters. As they unfold a much more complex picture emerges. Goya does not shy from the details of a conflict characterised by escalating brutality and atrocities on both sides, and the progressive, general debasement of human decency. Nor does he join in the popular demonisation of Bonaparte. War is, he clearly sees, a calamitous disaster for all involved.

Spanish opposition to Bonaparte was mobilised from a position of extreme nationalist, Catholic conservatism. By that point in his life, Goya was a liberal reformist. He was a supporter of the new, progressive constitution of 1812, and he was appalled at the restoration of the Bourbon dynasty, in the form of Ferdinand VII, after the end of the Peninsular War in 1814, leading to the abolition of the 1812 constitution and a climate of escalating censorship and repression, including the return of the Inquisition. Eventually, in 1824, Goya quit Spain altogether and settled in Bordeaux for the few remaining years of his life.

The bulk of the Disaster etchings, which still make for gruelling viewing, are reportage-like accounts of the everyday horrors of war, including grisly executions, the grotesque mutilation of corpses, and the effects of a period of famine in Madrid, in vivid graphic images that, it is no exaggeration to say, anticipate the approach of war correspondents and photographers of later eras, including our own.

Some images eerily anticipate such horrors as news photographs of the aftermath of the My Lai massacre in Vietnam, or the abuse of detainees in Iraq. The later etchings, though, the “extreme caprices”, are satirical forays that reflect Goya’s disenchantment with the increasing repressiveness of the post-war years.

Goya was a complex, deeply humane individual. The late Robert Hughes wrote particularly well about the perils of identifying him in terms of one particular attitude or characteristic: as a man of the people, for example, or an advocate of the Spanish Enlightenment.

He was both, to a significant degree, but he was also professionally and socially ambitious, adept at catering to a royal clientele. He came from a culture steeped in religious faith, superstition, and various practices that came to seem cruel and distasteful to him.

Upwardly mobile, he mixed in progressive, relatively privileged circles, with people who were regarded as little better than traitors once the nastiness of war set in and acceptable Spanish identity was funnelled into a fixed, conservative mould.

What we presume to know of his views derives from his work, because he did not directly record them, undoubtedly with good reason. He lived with the reality of political censorship and the Inquisition, which, his work makes clear, he despised. In the early 1790s he became very ill, possibly with a form of polio. He was partly paralysed for a time, but he lost his hearing permanently. Hughes reasonably suggests this turned him inwards.

He began to look to the demons within. Not in a self-pitying way but, by the time he embarked on the Disasters, as Hughes sees it, he was beginning to realise that his hopes for progress, for liberal reforms and a more just society, with a waning of the powers of the church and the monarchy, were groundless.

Human nature, as revealed by conflict and adversity, was base and cruel. Superstition was deeply rooted and ineradicable. Certainly, his more allegorical, later works offer an exceptionally bleak view of human existence.

Goya’s breathtaking achievement as a painter risks eclipsing his graphic work. But he was a graphic artist of genius, and drawing and etching were easily as important to him as painting. More and more, in his later years, he resented that painting commissions kept him from his graphic work. Yet he refrained from printing the Disasters, almost certainly because the last group of etchings in the series is caustically critical of the post-war rule of Ferdinand VII, and publication would in all likelihood have cost him his life. So it was that, in Hughes’ words, “the greatest anti-war manifesto in the history of art” did not enter the public realm for two generations following its completion.

Since his death in 1828, Goya’s reputation and influence have consistently grown. He left a vast wealth of work, and successive generations of artists could effectively claim him as one of their own: as a Romantic, a proto-Modernist, a Surrealist. There are grounds for all such appropriations and more. His creative impact on Edouard Manet, “the painter of modern life”, is obvious and constructive.

Many of the Surrealists were clearly indebted to him. Picasso specifically referenced The Third of May in his celebrated Guernica, while the YBA artists the Chapman Brothers, less convincingly, took a post-modernist approach to the Disasters in their work. More, over time, Goya’s influence was diffused through other forms and media, including reportage, documentary, cinema and theatre, including Beckett. That is partly why the Disasters retain their disturbing power and immediacy today.