‘If a painting gets too pretty, drag it across the studio’

Elizabeth Magill makes works of tremendous beauty, but she’s not averse to a little rough treatment to get to the heart of the work 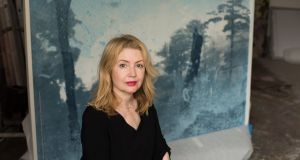 Can you ever have such a thing as too much beauty? Elizabeth Magill thinks you can. “Yeah, absolutely,” the artist laughs, describing how she treats any of her canvases that are in danger of succumbing to that state.

“I’ll take it, turn it on its face, drag it across the studio. It works. It’s unpredictable, what happens. I did that once in front of my gallerist in London. He was horrified, and I said, ‘No, it’ll be the best thing for this painting.’ ”

Beauty is nonetheless seductive, and it is beauty that first pulls you into Magill’s paintings, which have been exhibited at institutions from Imma to London’s Royal Academy, and in galleries from Turku to Tokyo. They are also held in collections around the world. But the thing about beauty is that it fades. It’s that chocolate box thing: never mind the chocolates inside, the pretty picture on the lid soon becomes bland and ordinary.

Not so with Magill’s canvases. Yes, you have a glowing twilight. Light pools across water, wavelets lap on the shore. And yet dark red branches cut across the scene, almost dripping rich, red blood into the waters. A dark headland looms in the background, and a small figure is almost invisible amid all that wild space.

You could wander into the work and get lost alongside, although you might find yourself rather frightened if you did. This is Red Bay (2016-17), and that’s what’s so good about Magill’s work: there’s usually something lurking in the midst of all that beauty, and she’s good at putting undercutting paradoxes into its heart.

First up, there’s that ambiguous light. “It’s the same in the early morning, you’re more alert to things,” says Magill. These are the artist’s favourite times. “That pivotal time of day, sinking into night, when the last breaths of the day are leaving,” she says – and this from a woman who claims she can’t speak well about her work.

We’re talking in the café at the Limerick City Gallery. Coffee for Magill, tea for me. Neither of us have slept well the night before. We wonder if it was something in the air. Atmosphere is important, we agree, though on her side, it’s more likely got something to do with installing a major one-person exhibition, and the interviews, chats and general levels of stress that go along with such an event.

She’s no stranger to the process: born in Co Antrim, Magill studied at Belfast College of Art, before moving on to London’s prestigious Slade School of Art. Selected for the Guinness Peat Awards at the Douglas Hyde before graduating, solo shows soon followed, including at Kerlin in Dublin, and Bristol’s Arnolfini.

Magill has since shown regularly with Kerlin, but this is her first major exhibition in a public space in Ireland, since the Hugh Lane in 2003. “I grew up in Co Antrim, in Cushendall. But when I got into the Slade, it wasn’t really an option to go back. London in the 1980s was so very different, and you could live on very little there. ” She pauses, considering the hectic mix of people, artists and work in one of the world’s major art cities. “So I never left.”

Back to her roots

She never lost her soft Northern Irish accent, and has recently returned to her roots, buying and restoring a run down farmhouse with her partner, on the Antrim coast.

“They’re destroying those old houses, it’s really important to keep the vernacular of the countryside. We’ve just planted 5,000 trees. I’m not being too heavy-minded about it, it just seemed like a good thing to do. They’re all indigenous species,” she says, before listing off the names of the trees.

Cushendall is quietly becoming an intriguing art spot. Bill Drummond of the K Foundation owns The Curfew Tower there, which runs artist’s residencies. Drummond cooks curry for everyone during the Heart of the Glens Festival. “He’s been here so long, they’ve kind of got used to him,” says Magill with a smile.

We’ve left the café to look more closely at her work, and I’m drawn back to those branches that so frequently slash across her landscapes. “I use them like a structure,” she says. She has also recently started using photographs, a little like Hughie O’Donoghue, although here they’re smaller, less dominating, and they feel more worked in.

In Wild Life (2017), two figures, Victorian explorers, are dwarfed by snowy mountains, while more of those branches slice across the view. Pretty blue flowers sit to the left of the picture, another oasis of bright beauty against those cutting trees. “They discovered forget-me-nots,” says Magill, though it must have been a particular species, as the flower has been known in these parts since the 1300s.

What’s interesting here is Magill’s brilliance with scale. Tiny humans are diminished, yet frequently brave in the face of sublime nature. She’s also alert to what these tiny humans can and do visit upon our planet. “I don’t want to be labelled as a ‘climate change artist’, I don’t want my work to be reduced to that. But it’s so important too. I think it’s reacting at the moment, nature is complaining.”

We walk through, past a room of new, smaller works, where Magill is experimenting with ideas and technique. They’re like rich jewels, full of new directions, yet still unmistakeably hers. Picasso’s Les Demoiselles d’Avignon (1907) appears in one, a cottage in the woods in another. She’s layering painting, silkscreen and film, looking at those layers that come between us and the world as it is, between what’s in our minds and out, in life.

“I want to be as inclusive as possible. I want the space of the picture to contain all these ideas. All these things are coming at me, but I don’t want to be overwhelmed. An artist’s studio is in her own head, as much as being a physical place.

“That’s the reason for the title of the show,” she adds. “Headland: it’s the world that’s inside your head, as well as a landscape.” Even if you can’t get exactly what’s in your head out, she says, you’ve gained. “Something has come out of that you could never have envisaged.”

We move on to talk about education, “The system is very narrow. I don’t know if it still is” – and about theory in art: “It’s important if it resonates with you, I’m fascinated as it offers perspectives, but people can lose a sense of what’s instinctive.”

We have walked into an adjacent gallery where works from the Limerick City collection are on show. Magill zeroes in on a patch of sky in a Paul Henry, immediately seeing the subtle streaks that lend the work its magic.

“I quite like ‘painter painters’. You know, people who use paint.” She recalls being fascinated by a Francis Bacon at the Ulster Museum, though that was before London opened her eyes to a far wider world of art. “That’s the thing, when you love an artist’s work. You find yourself having to go back to see it again and again.” The same could be said for her own extraordinary paintings.