The painter's latest, excellent work is rooted in the psychiatric history of the Pitié-Salpêtrière Hospital in Paris 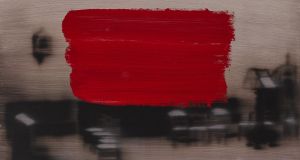 Obscura by Paul Nugent is at the Kevin Kavanagh Gallery

From his earliest exhibited works, Paul Nugent has been fascinated by what is not immediately visible. For a painter, this presented certain difficulties. His solution was to make representational images, working from photographs he had taken, of models attired in clothing he had made. The clothes were specific religious habits. He painted over the representational images with layer upon layer of coloured glazes until, at first glance, a painting might appear to be a monochrome abstract. But, if you kept looking, a ghostly under-image began to appear and, once you had tapped into it, so to speak, it proved to be surprisingly definite and persistent.

He has explored this basic though by no means simple template since, notably moving from the idea of the person within the painting to a space within the painting. Continuing the notion of a sanctified or holy presence, he turned his attention to the interior of Catholic churches, specifically the chapel in the Pitié-Salpêtrière Hospital in Paris. From the 17th century, those afflicted with mental illness or other neurological disorders in the city were likely to be treated at the Salpêtrière. In the latter half of the 19th century, the neurologist Jean-Martin Charcot became a kind of academic celebrity there. His lectures drew students from throughout France and abroad.

In the work in Obscura, Nugent has in mind Charcot’s notorious interest in hysteria. In line with other, some very productive areas of his research, he hoped to pin down hysteria as a neurological disorder with a precise location in the body. The bodies involved were “almost exclusively” female, and Charcot employed hypnosis in his efforts to diagnose and treat them. His Thursday morning lectures on hysteria – with patients involved – took on the character of theatrical performances. These days, there is little mention of hysteria in the clinical, 19th century sense of the term, when more than half of all women were presumed to be afflicted by it.

The problem was that, more and more, Charcot’s patients – several of whom became stars and celebrities, were essentially enlisted to perform and represent the condition of hysteria. They were acting out preconceived notions of what it looked like. Charcot embraced the novel technology of photography as a clinical aid in pinpointing and archiving hysterical symptoms, but with the unmistakable effect of encouraging patients to perform for the camera, rather than the camera documenting what was taking place.

In Nugent’s paintings, photographic source images of the Salpêtrière chapel are presented in distressed form, as though unfocused or wrongly exposed, a visual trope that echoes Andy Warhol’s rough-and-ready screen prints of photographic drop-outs or Gerhard Richter’s scraped, smeared images. They put us at a distance and make the chapel interior hard to read. All the more so when Nugent lays blocks of colour across a view, or applies broad, gestural brush strokes in an Abstract Expressionist manner. In the context, the opacity and excess of these wild brush strokes and imposing blocks of colour could be interpreted as symbolising a state of hysteria. They stand in stark contrast to the forensic clarity of Chardot’s photographs of hysterics or, rather, of women simulating hysteria. Despite their precise and apparently scientific quality, the photographs are in fact inventions, decoys. They are all about performance and tell us nothing of what is actually going on in the women’s minds.

The paintings are sombrely atmospheric. They are concentrated and a bit eerie. Their relationship to Nugent’s early work is clear. In the early work, drawing on the tradition of religious iconography, he implied a hidden, sacred content that turned out to be an imposture: someone dressed up as a nun. But somehow the magic of the process held up, in a secular rather a religious way. The magic was the artist’s own. In Obscura, the sacred, contemplative space, the chapel, is a site for another kind of imposture: the enactment of an invented notion of hysteria. Yet, again, the magic works. The paintings are charged, haunted and unsettling.

Kohei Naaata’s paintings are usually minimal in form, meticulously made but hardly there. They include simple compositions in which a central division is created by the subtlest of tonal variations between two adjoining blocks of pale, flat colour. The surfaces have been built up in myriad layers of acrylic. They are calm and calming, but one is also aware of that line of difference, a kind of fault line, which creates a sensation of the slightest seismic tremble. Other works consist of parallel bands of colour, or feature the warp and weft pattern of woven fabric in various ways and more recent pieces consist of layers of semi-transparent gauze.

Nakata’s work in one room of Nag’s basement space against a pale background. The stairwell, though, and the other room, is painted, courtesy of Farrow and Ball, with a dense, soft black, which is quite dramatic. Picked out by spotlights in this black space are Masashi Suzuki’s chawan tea bowls, traditional Raku pottery associated with the Japanese tea ceremony for centuries. Such bowls are usually shaped by hand rather than thrown on a wheel. The idea is that they are, in a Zen way, natural and unpretentious, expertly made but never technically showy. The examples on view are certainly beautiful, especially those on which a black glaze is used. Also on view is a thoroughly functional object, a vintage Japanese ledger, really an order book. Again, it is aesthetically very fine.