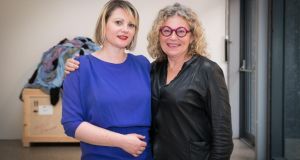 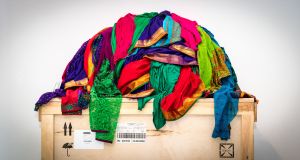 Patricia Cronin used emblematic clothing as signifiers of the victims 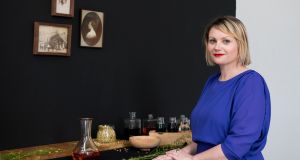 Glance through the plate glass window of the Lab on Foley Street and you’ll find that New York-based artist Patricia Cronin has transformed the main ground floor gallery space into a Shrine for Girls.

Three mounds of fabric clothing rest atop large packing crates, one against each wall. There is something appropriately sad and elegiac about the scene. The discarded clothes evoke the girls who may have worn them, prompting us to ask who they might be. And, why three distinct groups of garments? The answers have both local and global relevance.

The story of Cronin’s Shrine began in 2014 when she was on a plane to Italy to discuss her participation in the following year’s Venice Biennale. She decided to watch an in-flight movie called Philomena. Although – as her name suggests – there is a lot of Irish on both sides of her family, she had never been to Ireland and never heard of the Magdalene Laundries or how the babies of young Irish women had been taken from them and given up for adoption. Stephen Frears’ film, based on Martin Sixsmith’s book about the efforts of Philomena Lee to find the daughter who had been taken from her, struck her with revelatory force.

Cronin was at the time troubled by two other shocking news stories. One was the violent death of two cousins in a village in Uttar Pradesh in India. The teenage girls were reportedly raped and murdered. The case became mired in a tangle of claim and counter claim but focused international attention on the treatment of women in India. The other case was the Boko Haram kidnapping of 276 girls from Chibok secondary school in Nigeria. Most of the girls remain unaccounted for.

When she boarded the flight, Cronin was aiming to make a work dealing with contemporary masculinity. Philomena was the catalyst that prompted her to change her plans. Back in her Brooklyn studio it occurred to her that she wanted to respond to these three separate stories, all concerning the mistreatment of women and girls. She always sets out to make art that is directly engaged with the world and aims to contribute to social change, but she shies away from contributing to the theatre of atrocity. As she puts it, we know these horrible things happen, but to merely represent them is counter-productive, you’ll put people off or be sensationalist for effect.

She realised she wanted to create a shrine for the girls. The first venue was the Church of St Gallo, “the smallest church in Venice”. It has three stone altars. Using emblematic clothing as signifiers of the victims, she assembled three fabric mounds: saris for the Indian girls, hijabs for the Nigerian girls and aprons for those in the Magdalene laundries. A relevant photograph accompanied each fabric heap. Outside the church, a banner proclaimed the title in the 14 most widely spoken world languages.

At one point Cronin saw a group of Indian women notice the title and enter the church. They left. Sometime later they returned and approached her. They had, they explained, gone to their hotel to fetch a black sari – for mourning – and they wondered if she would incorporate it in the shrine.

The black sari has been part and parcel of the installation since. It is there in its Dublin incarnation, together with Cronin’s painted portraits of several of the individual girls involved in each of its sources. As Tina Kinsella writes in her introduction to the exhibition, the last Magdalene Laundry in Ireland closed only in 1996. It was, as it happens “located on Sean McDermott Street. . . within a stone’s throw of The Lab. For her, Cronin’s Shrine can be usefully seen in the context of continuing debates around the dynamic between church and State in Ireland that informs “the limitations and restrictions upon access to bodily autonomy, reproductive rights and healthcare facilities for women”.

In a great piece of programming, Shrine for Girls is paired with a new film by Anne Maree Barry, Leisure with Dignity, a work steeped in the historical texture of the immediate area. It stems from Barry’s residency at the nearby Fire Station Studios. She has developed a way of working that depends on her exploration of a particular area, physically and through research. Here, she zeroes in on Monto, historically Dublin’s red light district, named after Montgomery Street, which is now Foley Street. It’s Nighttown in the Circe chapter of James Joyce’s Ulysses, and James Gandon lodged on Montgomery Street, she notes, while working on the Custom House and the Four Courts.

She maps a roughly triangular psycho-geographic terrain, and working from various documentary sources, including court reports, she has invented three female characters. They include a country girl, Kitty D, who has become an experienced prostitute, and provides some concise, sharply drawn accounts of her experiences. Then there is the tough brothel madam, Madam May, who has pragmatically made a career for herself. She is ruthless and astute, noting the usefulness of her industry in providing information gleaned through pillow talk to those fighting for Irish independence, for example.

Anna Eliza Henniker’s journals and notebooks indicate that the countess was a keen, systematic herbalist. We see her at work. Barry picks out herbal recipes that would subsequently be of particular relevance to the lives of women in the area. There’s a certain alternative character to herbalism that here suggests the limited, peripheral roles available to women.

Barry’s richly atmospheric film is a clear-headed, unsentimental and subtle meditation on the lives women could negotiate for themselves within the confining and disabling structures of patriarchal power and authority.