It's a vintage year for master’s graduates in fine art, whose work has a contemporary edge 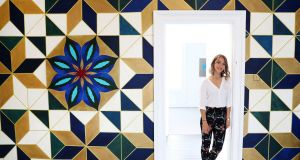 This NCAD show has been and gone, but the chances are that we will be seeing a lot more of much of the work that featured in it, and more from the participating artists. There were only 16 in all, but the standard was high, the voices diverse and the aims ambitious and pertinent.

There was no over-riding theme or concept, but what did emerge was a concern for the position of the individual in relation to a number of contexts with a particular contemporary edge. Those contexts include, not surprisingly, digital technologies, and also the natural world, gender, cultural identity, and other defining narratives of the moment.

None of the work, though, conforms to the passivity and narcissism of consumer culture. The artists are wary, critical and focused on existential questions. Ann Ensor is one of those who made a particularly bold imaginative leap. Her immersive installation, Fusing Forces, aimed to put us into the umwelt, the self-world, of the endangered freshwater pearl mussel. She did so very engagingly, without using digital imaging, rather playing on the fabric of the exhibition space and our sense of scale.

Using photography, Hayley Chambers made an equally audacious leap in visualising a merging or, as she puts it, “emotional dismantling” of the self, a feminine self within the environment as visualised by the Gaia principle of a synergistic, composite, self-regulating planetary entity.

Not for the faint-hearted, Siuan McGahan’s virtual-reality installation could be described as immersive. She sets out to convey the way that patterns of sexism and inequality are invisibly embedded in social norms.

Louise Casas seems to dismantle the nuts and bolts of painting itself. She cuts, shapes and suspends the fabric supports. She is exploring a return to the real, to the physical fabric of canvas, form, texture, line and colour – all of which she has great feeling for – as opposed to the immateriality of life online.

Elaine Hoey, already an award winner for her virtual reality work, unveiled a major new piece, Stranger than Fiction Is Fact, which is guaranteed to be more widely seen. The viewer is invited to virtually explore and interact with a realm of unfamiliar rules and rituals, a blueprint for negotiating the post-truth world.

The body was at the heart of the work of both Helen Richmond and Kurt Oppermann. Revisiting cubism in the virtual age, Oppermann’s work could be taken as reflecting the fragmentation of the self in a digitised environment, and the potential realignment of the individual’s component parts. His informal compositions use a beautifully controlled, slightly retro palette.

Richmond uses her own body, making body prints in wonderfully flowing, rhythmic compositions incorporating, besides paint, “gravel, rushes and sometimes writing in sedimentary layers”. She draws on Irish mythological stories, notably the tale of Midir and Etain, “where the heroine flits between worlds”.

Frances O’Dwyer’s carefully poised installations extend painting from a rectangular format to encompass interiors and the external spaces beyond.

In his work, Iain McEllin draws on the workings of an ultra-fine microscope, the FESEM, to get back to the fundamentals of light, dark, optics and vision. In all, it’s an exemplary show.

In the digital age, more or less everyone is a photographer. Whole formats and genres have evolved with digital technology as their driver. Conservative estimates suggest that 1.2 trillion digital photographs will be taken this year, the overwhelming majority on mobile phones. Long before the arrival of the smartphone camera, David Bailey remarked that the impact of technological improvement on photography was that “it makes mediocrity look good”. Young photographers with an eye to professional involvement have a choice: join the revolution or keep their distance.

DIT’s photographic graduate show usually delivers, and this year was no exception

The need for photographic professionals endures. We still need photojournalists with expertise and experience, along with photographic specialists in many other areas. And the sheer popularity and technical possibilities of photography make it irresistible for artists. That is confirmed by the continuing rise of photography courses at art and technology colleges.

DIT’s photographic graduate show usually delivers, and this year was no exception. Essentially graduates showed a succession of wide-ranging photo essays, with many taking chances and pushing expressive possibilities. Shauna Lally considered our Catholic legacy by reconstructing the votive hand gestures recalled from the rituals experienced in childhood. Two rivers featured: Aisling Gordon traced the textures of life along the Suir; and Stephen Keaveney looked along the Boyne, recording ruins and industrialisation, decay and regeneration.

Catarina Leone’s Chrysalis featured an abandoned satin dress in a wild landscape, emblematic of the demands of conformity and the desire to escape them. Emma Roche’s studies of women in their own spaces aimed to avoid the objectification built into most representations of women in consumer culture. Lina Scalzo made a series of fine black-and-white portraits of androgynous young people.

There was also fine work at IADT photography. Andrew Freeland’s montage of street photographs had a terrific, gritty, open-ended narrative quality. Working in Dublin and Paris, he became a flâneur, absorbing and capturing the energy, drift and flow of urban life and character.