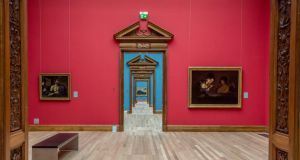 New-look National Gallery of Ireland: stripping back the walls has made the elaborate oak door frames of the Milltown Wing’s enfilade – its memorable succession of galleries, almost all now painted blue – even more prominent. Photograph: Brenda Fitzsimons

It is a revelation, quite literally. The long-awaited renovation of the National Gallery of Ireland on Dublin's Merrion Square has revealed elements of the building that have never been seen by members of the public as well as windows that were blocked up for decades, with startling effect.

Who would ever have guessed that the sumptuous Shaw Room, in the original Dargan Wing, had a set of four very large windows on its northern side? They date from the gallery's foundation in 1864 when this room was used as a sculpture court, but were lost later because the gallery needed more hanging space for paintings.

Everyone familiar with the once deep-yellow Shaw Room will be amazed by how much it has changed, after the historic building re-opens to the public on June 15th. Visitors will be even more stunned by the new elongated “courtyard” in a void between the Dargan Wing and the 1901 Milltown Wing, covered by a light-refracting glazed roof.

This dramatic space is quite extraordinary, not least because nobody but the gallery staff knew it even existed. Rising to the full height of the building, it incorporates reinforced concrete lift shafts at either end, a wall of white ceramic tiles that reflect light, the Dargan Wing's stone cornice and even part of its drainpipe, as a little memory.

Overlooked by glazed balconies at different levels, the courtyard will serve as an orientation and circulation space, with solid bench seating done in terrazzo by Colm Ryan. Its glazed roof was designed by Irish-born engineer Tom Gray, who's based in Paris; he is also working on a new roof for the old Central Bank on Dame Street.

The overall renovation has been deftly handled by Heneghan Peng Architects, who are better known for their cutting-edge modernist designs, such as the Giant's Causeway Visitor Centre in north Co Antrim, the Palestinian Museum in Ramallah, on the Israeli-occupied West Bank, and the Grand Egyptian Museum on the edge of Cairo.

They won all of these commissions by competition, and the National Gallery of Ireland was no exception. What clinched it for Heneghan Peng was their master plan for the gallery, organised around a new route through the Merrion Square building to Benson & Forsyth's Millennium Wing on Clare Street, now looking rather tired.

The older parts of the gallery have been closed for the past six years to permit the extensive renovation works to proceed, starting with re-roofing the Dargan Wing. “The gallery had to repair the building and also deal with fire upgrading, environmental controls and accessibility issues,” Roisín Heneghan explained.

“It was also a chance to think about how visitors move through the building, as previously they tended to get lost all the time, so we needed to create the space to allow them to do that, using buffer zones between the art galleries, all of which are 'control spaces' that need to be protected from direct daylight penetration,” she says.

“We had to find a way of controlling daylight to give the feeling of natural light in the space, but not to 'flatten out' the light, as Tom Gray put it. So we adopted a system of redirected louvres —  aluminium grilles between panes of glass in the rooflights that are passive, rather than mechanical. These are enough to deflect it.”

The new system is most clearly visible in the Dargan Wing's Grand Gallery, above the Shaw Room, where its “daylight quality” has been maintained, even after being effectively taken out. A new catwalk has also been installed here, between the inner and outer glazing, while a similar “double box” is also used in the roofspace of the Milltown Wing.

All of the mechanical and electrical plant required for the gallery could not be piled up on its roof, so it's concealed out in front, under the new lawn. Beneath it is a gas-fired combined heat and power (CHP) plant as well as a range of air-handling equipment. That's why the trees had to be felled, although they have now been replaced by new ones.

Granite setts ramp up to the entrance (for universal access) so the old steps are gone. So are the original, rather ornate oak doors, replaced by a modern glazed entrance. But instead of going straight in, as previously, visitors must turn right through the new “entrance box”, which Heneghan says was necessary to deal with numbers.

All of the new elements are done in contemporary materials, to distinguish them from historical features, although Shih-Fu Peng — Roisín Heneghan's partner and husband — insisted that new grilles for the ventilation system should be copied from Victorian grilles found in the building, rather than in stainless steel. “That would be wrong!” he said.

In the Shaw Room, for example, the continuous run of bench seating along its walls has been raised quite imperceptibly to accommodate large-diameter pipes carrying services into the building, via a tunnel from the eight-unit CHP plant under the lawn. Treated water is taken in at basement level and goes to air handling units, to be turned into treated air.

The architects, who won the National Gallery of Ireland competition back in 2006, took opportunities to visit the renovated Rijksmuseum in Amsterdam and the National Museum in Stockholm as well as attending a symposium in Dresden on “the ideal museum”, to inform themselves on the latest thinking about gallery design, especially in older buildings.

“The first thing we had to do was to understand what the National Gallery had and how it could be re-thought, before we developed the master plan,” Heneghan says. “Then the crash came in 2008, and the Office of Public Works (OPW) decided to proceed with fabric-related issues to bring the historic wings up to scratch - basic things, like re-roofing.”

Complicating Heneghan Peng's task was the fact that each of the three older buildings — the Dargan and Milltown wings as well as the Beit Wing (1968) — inevitably reflected the eras in which they were built. “The approach we took was not to homogenise it all by forcing a symmetrical perfection, but to allow the different elements to be read,” she says.

Thus, the Milltown Wing's enfilade of elaborate oak doorcases has not only been retained, but embellished and made even more prominent by the dint of stripping back to the original walls, getting rid of “an accretion of stuff over time”. Radiators were also taken out to “de-clutter” this wing's very memorable succession of galleries, all now painted blue.

Room 21, at the end of the Dargan Wing, was remodelled in neo-classical style after “a lot of anguish” about how it should be treated, Heneghan says. “We had an idea roughly what was there, but the precise detailing was gone, so we worked on that with [conservation architects] Blackwood Associates.” There is also a dark room for stained glass, all back-lit.

Regrettably, “health and safety” rules meant that new steel handrails had to be installed on the elegant staircases leading from the Shaw Room to the Grand Gallery. Also, the modern staircase of the Beit Wing, well-known to anyone attending lectures at the National Gallery, will have to be removed in its entirety to realise Heneghan Peng's master plan.

But its “big move” — creating the new route from Merrion Square to Trinity College — was not included in the renovation, which will probably end up costing no more than €30 million. Architect Paul Byrne, the OPW's clerk of works, explained that contractor John Paul's tender was for €25.6 million; however, the final account has yet to be agreed.

When one considers that we are currently “investing” €550 million in a motorway between Gort and Tuam, in Co Galway, this is a remarkably small sum for such an extensive and complex renovation. It is, therefore, vital that modest additional funding is provided for this next and final phase, not least to give real unity to the National Gallery.

Opened in 2002, Benson & Forsyth's Millennium Wing certainly gave the gallery a “wow factor”, but its connection with the older buildings is less than satisfactory — through single doors on two landings. And while the wing has provided much-needed facilities, such as a café and bookshop, this needs to be addressed, as does the dirty-looking façade.

Appropriately, the statue of railway magnate William Dargan, who inspired plans for the National Gallery, has been turned around to look across Leinster Lawn to the companion Natural History Museum. Unfortunately, the bronze is blackened as a result of historic air pollution, and it would be good to find an effective way of cleaning the statue.

It's shocking that the spectacular National Gallery renovation coincides with plans to cannibalise part of the National Museum on Kildare Street to provide a temporary meeting place for the Seanad, while its own chamber is being restored. Instead, we should reclaim this great cultural cluster centred on Leinster House by removing the politicians altogether.

Built as a town house for the dukes of Leinster (or “Linster”, as Senator David Norris calls it), it was later occupied by the RDS and deserves more worthy tenants than our deeply dysfunctional parliament.

* An edited version of this article appeared in The Irish Times Weekend Review on June 10th, 2017.