The next generation of artists: the 2017 graduate shows

A significant number of graduates show diverse, thoughtful bodies of work that show their knowledge of the history of art 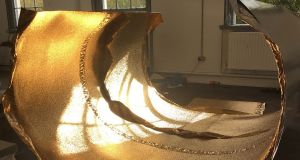 There has been and, at the NCAD still is, a great deal of very accomplished work on view at two of this year’s fine art degree shows around Dublin. Should that be surprising? Not necessarily, but as technology continues to feed into the fabric of contemporary culture in ways and with consequences that are impossible to predict, one wonders whether colleges addressing cultural production can keep pace and maintain their relevance. In the event, it appears that they can. There is no technological deficit in the art on view, unless, that is, you want your art entirely in the form of tweets and instagrams. In which case you will be disappointed.

The graduates are clearly at home in the digital world but, as Annie Doona of IADT noted last year and again this year, they are no longer infatuated or bowled over by it. When, decades back, video became as near a universal technology as possible, it seemed that every other art graduate was making interminable videos. But despite the exponential development of digital technology since, the medium isn’t the message for current graduates, even as it feeds into the work they make. Take, for example, Áine Marry, whose show is “an extensive storyboard supporting the topic of mental health”. Her drawings, paintings and objects are steeped in social media, but adopt a judicious, critical approach to it with great honesty and wit.

Doona points to an noticeable interest in physical, tactile materials and media, perhaps as a reaction to the growing dominance of screens, and that holds true generally. The technology is there, but at IADT the lure of the real world is evident in Aisling Flood’s exceptional sculptural works under the heading, Laying the Foundations, and Alice O’Connor’s monumental use of insulation material. Equally noteworthy were Lorcan McGeough’s fine sculptures about the magic and mechanics of hearing, and Emma McKeagney’s subtle process pieces exploring the properties of glacial till gathered in the field. Also of note were Amy Harlow, Laura Knox, Thomas Garrett, Rachel Byrne and Zunaira Khursid.

If degree level painting was faltering at IADT, it is in remarkably good shape at NCAD, perhaps partly another manifestation of the return to materials. What’s especially impressive, though, is that while in the past there was a presumption that painting was a kind of ideological choice, one not necessarily backed up by any great skill or rigour, that notion has been phased out. A significant number of graduates show diverse, thoughtful bodies of work that evidence attention to and knowledge of the history of art and the history of painting.

Eve O’Callaghan is a case in point. Often monochrome, her paintings are assured and accomplished. They relate not only to the world around them, but also to various modes and schools of abstract painting, and would convince in any such company. Better yet, she is confident enough to let the work speak for itself. She’s not alone in this, but the majority of graduates’ work is accompanied by an artist’s statement, often extending over two pages of text.

To be fair, that can be helpful. It can provide a way into the work or indicate underlying concerns, but the pressure to articulate can become pressure to paraphrase, and if you can paraphrase what the work is doing, you’ve sort of replaced or eclipsed the work. The painter Mark Swords recently commented on how this is an issue not just in art schools but also with the presentation of art in galleries. People now expect a capsule summary, after which a quick glance at the work will suffice: because you’ve got it. O’Callaghan bravely suggests we look at the paintings. As William Empson famously argued, rather than being a problem, ambiguity in art is useful and essential.

In a way that recalls the subversive strategies of Sabina Mac Mahon, Siúan Ní Dhochartaigh which brilliantly interrogates the conceits and conventions of the art world. All of her work should be seen beyond the college walls, but do see and hear it while it is there. Just to mention, there are exceptional figurative painting by Lorraine Slator, Niall Conlon and Alexandra Roche. And among other outstanding painters are Jinzge Du, Derek Finn, Karis Hopkinson, Chris Kearney, Natalie Pullen, Peter Smyth, Marie O’Sullivan, Leolie Winters, Emma Brady Fergus Smith and, to be fair, more.

Often, sculpture graduates are faced with an all or nothing bet on a single installation. That can work in their favour. This year, Peter Slyman’s brilliant installation, with a nod to Richard Wilson’s landmark 1987 work 20:50, expertly situates the viewer in an unsettling, ominous space. One of the show’s highlights, it is flawlessly envisaged and delivered, and certainly deserves to outlive this one iteration.

Kevin O’Kelly’s immersive work is cut from the same cloth in drawing you into a world. This time Hitchcock’s Rear Window is a point of reference. Less cogent perhaps, but still powerful, Naomi McGovern’s work leads the viewer into a atmospherically theatrical setting. Louis Gruenfeld may be altogether subtler but is excellent in his careful attention to materials and form. Lest tech be overlooked, Ciara O’Kelly is a virtuoso of digital imagery, producing fluent, ingenious works.

There is a great deal of print in the print department, suggesting that the exodus to digital imaging, installation and whatever else has slackened, even if it has not ceased. Print is, when you think about it, integral to both the physical and digital worlds of multiple, endless copies, versions and units that we now inhabit. Andrew Shilling addresses this very point incredibly well in his work – as do Nicole Byrne and Leo Clarke. Michelle Fahy does too in a different, equally effective vein. But something draws artists back to the disciplines and materials where they began. And print is a haven for drawing, as with exquisite works by Cara Donaghy. Rebecca Phelan’s architectonic aquatints, in which modernist architecture meets nature, are superb. Don’t miss, also, Hannah de Chant McMillan, Margaret McKeon, Lia Cowan and Luke Fallon.

NCAD show is at Thomas Street Campus, 100 Thomas St and The Back Loft, 7-11 Augustine St, Dublin, until June 18th, ncad.ie