‘Guernica’: 80 years on still a stark reminder of war’s horror 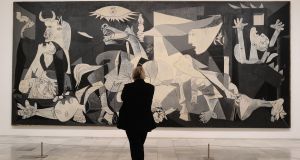 In 1981, when Pablo Picasso’s Guernica finally arrived in Spain after more than four decades of exile, it was placed in a new annex of the Prado museum, behind bullet-proof glass. With Spain having only recently emerged from dictatorship, democracy was still fragile and the authorities feared that such was the painting’s political and emotional charge that it might provoke an act of vandalism or terrorism.

It now hangs in the Reina Sofía modern art museum. The bullet-proof protection has long been removed, but the impact of the work – which draws by far the biggest crowd of any in the building – has not diminished.

“In a black-and-white rectangle that looks like an ancient tragedy, Picasso sends us our death notice,” noted French writer Michel Leiris of Guernica. He went on to describe it as the embodiment of “all the high emotion of a last farewell . . . something so unforgettably beautiful.”

Eighty years after Picasso completed the mural, on June 4th, 1937, not only does Guernica still draw crowds, but it reminds the modern world of the atrocity that inspired it – the bombing of the Basque town of Gernika by the German Luftwaffe during the Spanish civil war – as well as the horrors of more recent events.

In an age of air strikes, it is something of a reference point – last year, British MP Andrew Mitchell, speaking in the House of Commons, compared the attack on Gernika to Russia’s use of force in Syria.

The painting can also still provoke controversy. In April, Basque politicians approved a motion in their local parliament requesting that Guernica be moved to their region on the grounds that the separatist violence that plagued the Basque Country for four decades has now ended.

“If there is one political painting in the world, it is Guernica,” Jasone Agirre of the nationalist Bildu coalition told the Basque parliament.

That Basque request to move the painting has been rebuffed for technical reasons. But it forms part of an extraordinary legacy for a work that Picasso conceived and executed with lightning speed having been commissioned by Spain’s leftist republic for the 1937 World Expo in Paris.

As part of the series of events to mark the painting’s 80th anniversary, an exhibition in the Reina Sofía museum, Pity and Terror: Picasso’s Path to Guernica, shows the artistic and psychological evolution that led the artist to produce the masterpiece.

Although Picasso was commissioned in early 1937, it was not until the town of Gernika was bombed on market day on April 26th, killing between 200 and 1,600 civilians – historians remain divided on the figure – that the artist found his subject matter.

Picasso, who was born in the southern city of Málaga and was living in Paris, had never visited Gernika, but was distraught by the indiscriminate loss of life being widely reported by the international media.

He worked on the painting in his studio in Rue des Grands-Augustins, producing about 60 preparatory drawings and paintings, and the final mural was large in both ambition and scale, measuring 7.8m by 3.5m.

The Pity and Terror exhibition documents the whole process, showing the preliminary works, as well as a fascinating sequence of photos by Picasso’s lover, Dora Maar, documenting the creation of Guernica itself, from the sketched outlines of a mother holding her dead child, a dead-eyed bull, an impaled horse and spectral human faces, to its final, terrible glory.

The exhibition also includes some of the French newspaper articles that Picasso would have read after the bombing. Meanwhile, photographs from Picasso’s personal archive show the mutilated limbs of Spaniards who had been maimed during the civil war and highlight his unique relationship with the human body. “It’s a funny thing, flesh, to be made of flesh,” he once told a friend. “Imagine a house built of flesh – it wouldn’t last long.”

Following the World Expo, in 1938 Guernica went on an extensive European tour. By the time it arrived in New York, on May 1st, 1939, the Spanish civil war had ended, with the right-wing rebels victorious and their leader Franco installed as dictator. Picasso declared the painting would not return to Spain until democracy was restored.

In the meantime, it would inspire a generation of young American artists, who viewed it in the Valentine Gallery and then the Museum of Modern Art (MoMA). As Spanish art historian María Dolores Jiménez-Blanco wrote, Guernica showed them abstract art could be political and that “the maximum expression of solidarity towards their own era was that which came from inside the artist”.

Jackson Pollock visited Guernica and his wife Lee Krasner later recalled him exclaiming, while admiring a book of Picasso’s paintings: “God damn it, that guy missed nothing!”

The painting’s artistic legacy continues to resonate in the context of more recent conflicts, as Iranian artist Siah Armajani showed when he referenced it in his anti-war work Fallujah in 2007.

The long exile of Picasso’s work had made it a symbol of the bloody division in Spanish society between Franco’s victors and the vanquished left. But the return of Guernica to Spain in 1981, while fraught with controversy, also reflected the political efforts being made to repair that schism following Franco’s death in 1975.

Former members of the regime were co-operating with the newly legalised political left to ease the transition to democracy. In a pact which has only started to crumble in recent years, both left and right agreed during that turbulent time that the terrible events of the civil war and dictatorship would not enter the political arena. But since then, Spaniards – and the whole world – have been able to see that trauma expressed in unforgettable fashion in Picasso’s Guernica.

Cork auction to feature important women from War of Independence