Anne Madden’s odyssey from the labyrinth to the heavens

Anne Madden: Colours of the Wind - Ariadne’s Thread review: The Greek heroine Ariadne is the starting point for journey into colour and space 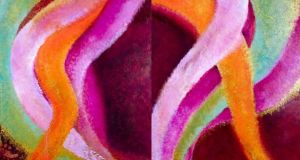 Cast your eye over Anne Madden’s radiant paintings at the Hugh Lane and it immediately seems appropriate that Ariadne, the heroine of Greek myth who she invokes, is a hard woman to pin down. In the paintings, bright clouds of colour snake and swirl and coil like criss-crossing vapour trails from innumerable planes, or radiate from hot, glowing centres.

We are up in the air, propelled through a vast, otherworldly realm. It’s impossible to get one’s bearings. The largest piece in the show dates from 2004 and is helpfully called Aurora Borealis. It is a starting point for subsequent work, and more than a starting point: it establishes the indeterminate pictorial space, somewhere between representation and abstraction, that the work continues to explore.

Where and how does Ariadne come into this? She appears in many mythic narratives and, while some consistencies emerge, there are several differing accounts concerning aspects of her identity, status, actions – and her fate. Just two pivotal episodes are key to Madden’s work.

The daughter of King Minos of Crete, Ariadne oversaw the labyrinth, into which young Athenians were periodically sent to be killed by the Minotaur, the bull-headed monster at its heart. When Theseus arrived with the aim of slaying the monster, Ariadne fell for him and gave him a sword and a ball of thread to map his way through the labyrinth. Her plan worked perfectly.

Afterwards, they set sail together, but, when they stopped off at the island of Naxos, he abandoned her while she slept. Bacchus came to her rescue. Taking her crown from her head, he threw it far into the heavens, where it became a constellation. Which brings us neatly from the underground labyrinth, by virtue of Ariadne’s ingenuity, to the celestial domain.

It’s worth mentioning that the Aurora Borealis has its own Greek connection. Aurora is Homer’s “rosy-fingered” goddess of the dawn.

Madden is in no sense illustrating a narrative. Her allusions to Ariadne, the labyrinth and the Minotaur enable her not to tell a story but to set ideas in play. The thread of possibility leads from the dark, enclosing finality of the labyrinth to the imaginative spaces of the heavens, where there is room for life and creativity.

She also alludes to Ariadne’s thread as a golden thread, perhaps in reference to Dickens’s evocation of the Three Fates of Greek and Roman mythology, spinning the thread of mortal destinies in A Tale of Two Cities. Dickens introduces the positive image of Lucie’s “golden thread”, as she weaves the beneficial human connections that carry us through adversity. Madden’s imagery reflects inner, mental states and experiences. These concerns, and her artistic approach to them, extend back through her life.

It is well known that Madden was half of one of Ireland’s premier creative couples. She and Louis le Brocquy married in 1958 and they lived, and for the most part worked together – independently but together – until his death in 2012. Their relationship was, by most standards, exceptionally close. During their years in the south of France they shared a studio. Both avid readers and conversationalists, their life together was central to their creative processes, discussions and debating sparking ideas and opening lines of enquiry.

Born in London to an Irish father and an Anglo-Chilean mother, Madden’s early childhood was spent in Chile. Time spent with relations in the Burren in Co Clare was formative. She absorbed and grew to love the wild limestone landscape, aspects of which have fed into her work periodically since.

Her encounter with new American painting at a major exhibition in the Royal Academy in London in 1956 was liberating. For one thing, it offered a way of approaching the character of the Burren landscape in a way apart from representational tradition.

She did so to spectacular effect in one series of works using poured pigment – a balancing act of chance, control, luck and instinct. Then, in the 1970s, she was inspired by the megalithic stone tombs to create a series of monumental paintings, sombre and elegiac in mood. These works, in a general sense, evoke loss, mourning and memory. They can be seen as responding to events in the world around them. But it’s fair to surmise that they are equally personal works. From quite early on, Madden’s life has been marked by bereavements, sometimes in tragic circumstances.

Where the megalith paintings are at first punctuated by vertical divisions, as the series developed they acquired horizontal beams and, as Madden herself noted, became doorways. This introduced the idea of movement, progressing from one kind of space on to another. When Pompeii became a subject, the doorway motif became explicit, and as the subject, the Villa of the Mysteries, involved initiation ceremonies, another idea was introduced. All of these concepts fed into the next body of work that followed the sudden death of Madden’s brother.

Here, something close to Ariadne’s thread in her recent work is introduced in the form of a path of light. In this case the path leads to her studio, and the paintings refer to her struggle to motivate herself to work again despite her grief. The space of possibility is the studio and it is her acceptance of her responsibility to live and work that eventually illuminates her path.

Gradually, with subsequent paintings, that space opens out to encompass the Mediterranean Sea in her Odyssey series, with Icarus as a symbol of mortality. This is a simplified account of the development of Madden’s work, but the long-term artistic logic of the complementary relationship between her two archetypal spaces, the closed-in underworld and the limitless expanse of creative possibility, is fully evident in her most recent and chromatically exultant paintings.