Vermeer ‘gives you ideas, but not the manual’ 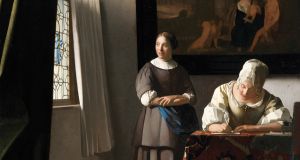 This week sees the reopening of the National Gallery of Ireland’s historic wings, and the accompanying exhibition, Vermeer and the Masters of Genre Painting: Inspiration and Rivalry, is the greatest achievement of Dr Adriaan Waiboer, head of collections and research at the museum.

Waiboer, who is Dutch, had the idea for the show six years ago. That’s a long lead time for any exhibition, even of Old Masters.

But organising a major exhibition is tantamount to concluding an international treaty, with participating museums exploiting their treasures as bargaining chips. Waiboer struck an alliance with the Louvre, which owns Vermeer’s The Lacemaker and The Astronomer, and the National Gallery in Washington, which contributed Woman Holding a Balance and A Lady Writing. They agreed the exhibition would travel to all three museums.

Waiboer and Blaise Ducos, his colleague from the Louvre, set about cajoling other museums to lend paintings. They obtained 10 for the Dublin show (Vermeer’s total production was 36 paintings).

“I would love to make people aware that it’s not a once in a lifetime chance – it’s a once ever chance,” Waiboer says. “You are not going to see 10 Vermeers together in Ireland again. We are going to show The Astronomer and The Geographer’ [from the Louvre and Frankfurt] together.”

Vermeer was a perfectionist who produced on average three paintings a year. There are several reasons for his slow pace. Managing the art dealership and inn he inherited from his father, and his mother-in-law’s investments, ate up time.

So did presiding over the painters’ guild in Delft, and tending to his 11 children. Vermeer converted to Catholicism to marry Catharina Bolnes. She bore 15 children, four of whom died before they were baptised.

Vermeer was not the most famous, nor the most influential, nor the best paid

The exhibition seeks to refute the misconception that Vermeer was an isolated genius, the “Sphinx of Delft”, as he was called by Théophile Toré-Burger, the 19th-century French art critic who re-discovered him after 300 years of obscurity.

Not only was Vermeer part of what would today be termed a network of Dutch genre painters, “He was not the most famous, nor the most influential, nor the best paid,” says Waiboer.

Frans van Mieris was the best known and best paid member of the group, not only in Golden Age Holland, but a hundred years later in 18th century France. Much of the visual lexicon of the period – letter-writing, hand-washing, gentleman callers, mirrors and musical instruments, oysters, parrots and little Spaniel dogs – was invented by Gerard ter Borch.

The exhibition includes some 50 works by Vermeer’s contemporaries, arranged in thematic groups to illustrate the mutual inspiration and rivalry between artists.

The Vermeers stand out though, not only because his paintings are more familiar to us, present in at least a dozen novels and feature films, not to mention advertisements.

One has only to compare Vermeer’s Woman Holding a Balance with Pieter de Hooch’s Woman Weighing Gold Coin, the two paintings that opened the Louvre’s exhibition, to see why Vermeer is so special.

De Hooch and Vermeer worked together in Delft. “De Hooch was several years older, and he was the point of reference for Vermeer,” Waiboer says. “At some point it changed. De Hooch became the follower.”

It is not known which woman weighing coins was painted first. De Hooch places his in a more expensive décor, but the viewer has eyes only for Vermeer’s, with her incredible presence and contemplative, Madonna-like face. He often gave hints to the meaning of his canvases by placing a painting within the painting, in this case, of Christ weighing souls at the last judgment.

“He gives you ideas, but he doesn’t give you the manual explaining exactly what he means,” Waiboer says. “He’s not unique in that, but he does it better than anybody else.”

I kept hearing people say, ‘Ah, the Dublin paintings!’ Because I am Dutch, I always tell my Irish friends, ‘You have paintings you should be proud of’

The letter paintings by Vermeer and Metsu, all the legacy of Sir Alfred and Lady Beit, stood out in a room filled with paintings on the same theme.

On opening night at the Louvre, Waiboer recounts, “I kept hearing people say, ‘Ah, the Dublin paintings!’ Because I am Dutch, I always tell my Irish friends, ‘You have paintings you should be proud of’.”

Genre painters often sprinkled clues across their canvases. In Lady Writing a Letter, a crumpled paper, possibly a discarded draft, more likely a letter-writing manual, a seal and wax lie on the floor. Metsu’s Woman Reading a Letter has dropped a thimble.

“These objects indicate that right before we jumped in, there was some sort of decisive moment,” Waiboer explains. “Something was happening.”

In some ways, other artists were superior to Vermeer. The hands and faces of Metsu’s subjects are finer than Vermeer’s, Waiboer says. Metsu painted fabrics in different hues of black, conveying different textures, with astounding artistry in Man Writing a Letter.

Vermeer’s interiors and costumes are more luxurious than the average Dutch family would have known, but they are less fantastical than those of his contemporaries Metsu and van Mieris, who imagined brass chandeliers, red wall hangings and extravagant clothing to please affluent collectors.

Vermeer displayed his serious streak in The Astronomer and The Geographer, the only men he painted alone

By mid 17th century, serious portraits of black-clad burghers with lace collars had all but disappeared. “People with money wanted paintings they could enjoy,” says Waiboer. “They wanted images of women with cleavage luring men . . . These artists were as interested in painting reality as the makers of Dallas and Dynasty are in depicting reality.”

Vermeer displayed his serious streak in The Astronomer and The Geographer, the only men he painted alone. Gerrit Dou’s small, nocturnal paintings of astronomers, which inspired Vermeer, would have been more valuable at the time, but pale by comparison in the eyes of the 21st century. “Vermeer takes the subject, puts them into his own realm of light and space and wonderfully constructed interiors,” says Waiboer.

The astrolabe, globe and quadrant of Vermeer’s scientists, and their kimono-like day coats, show how cosmopolitan was Golden Age Holland, the most urbanised country of its day.

The exhibition is replete with other symbols of the wealth amassed by Holland as a trading nation: Chinese porcelain and furs, ebony and ivory, Italian marble, carved Spanish chairs, African slaves . . .

It all came crashing down in 1672, the Rampjaar or “disaster year”. Louis XIV invaded Holland. The country was also attacked by the English fleet and German bishops.

Many artists of the Golden Age were reduced to house-painting to survive. Vermeer went bankrupt. “During the ruinous war with France, he was not only unable to sell any of his art, but also, to his great detriment, was left sitting with the paintings of other masters that he was dealing in,” Vermeer’s widow Catharina wrote.

Unable to provide for his children, the painter “lapsed into such decay and decadence . . . as if he had fallen into a frenzy, in a day and a half he went from being healthy to being dead,” she continued.

Like Rembrandt, whose work had gone out of fashion, and who died six years before him; like van Gogh, who sold not a single painting in his lifetime; Vermeer ended tragically. As tastes evolved with the centuries, all three Dutch geniuses attained a form of justice, by securing the world’s adoration.

Vermeer and the Masters of Genre Painting opens on June 17th. For tickets, see nationalgallery.ie