Event of the Week: Brian Maguire – ‘War Changes its Address’

The Aleppo Paintings: dismay at scale and intensity of the destruction, of place and people 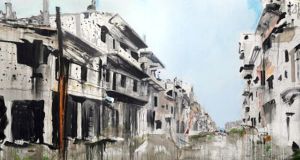 While he may not be well known for the optimism of his work, there is usually a redemptive core to Maguire’s projects.

Brian Maguire has a long history of identifying with the underdog, with those marginalised and silenced by society. He has not investigated issues of inhumanity and injustice in a remote, theoretical way. Rather he has made every effort to be practically involved with his subject matter. His approach has led him into settings usually regarded as remote from the rarefied domain of the art world: he has been actively involved in art training programmes in prisons, and he has also worked in women’s shelters, in psychiatric hospitals, and with the inhabitants of favelas in Brazil. He also visited Mexico at a time when Ciudad Juárez had become notorious for murders of young women on an horrific scale.

In all of this, his direct engagement with individuals is consistent. Every drawing and painting has a face-to-face encounter at its heart. He is an expressionist artist. Which is not to say that he eschews analysis. When he was working in the favelas, it became clear to him that that the areas were little better than apprentice schools guiding the unfortunate young population into poverty and prison. He looked to the working of the institutions rather than just the plight of the individual.

In his 2016 exhibition at Kerlin, Over Our Heads the Hollow Seas Closed Up he looked at the plight of refugees desperately trying to make it across the Mediterranean to Europe. The mortal danger of the journey and, even given survival, the uncertain, problematic future that waited at journey’s end, provide some measure of the horrors the refugees were escaping from. Such a crisis is a compelling subject for an artist who is drawn to highlight injustice and unnecessary suffering, but it is also a difficult one.

Maguire was not the only artist to come up against this problem: even the renowned Ai Weiwei drew some flak when he made a performative work that aimed to identify with the migrants’ appalling plight. Is there a point, for example, at which empathy crosses over into exploitation? At the end of the day the artist can return to a life of comfort and privilege and even add another eye-catching subject to his or her CV, but the situation of the migrants remains subject to intractable geopolitical forces.

In the event, Maguire managed to tread the fine line between being a witness and a voyeur. There was always a sense in his paintings that he was not dealing with victims in the abstract. These people were delivered up to their fate by an intricate mechanism of circumstances created by both overlapping failures and malign calculations. It was inevitable, then, that he should seek out the source of the problem, rather than just dealing with the effects, so he set off to visit Aleppo in Syria, one of the oldest cities in the world with a population of more than 4.5 million prior to the conflict and, to its immense misfortune, the focus of a relentless campaign of destruction during the Syrian Civil War.

Maguire’s paintings speak for themselves, but one can sense his utter dismay at the scale and intensity of the destruction, of place and people. Although the business of reconstruction had commenced when he visited, four years of pounding by munitions of all kinds, many from devastating airstrikes, had reduced major swathes of what was a haven of civilization to a battle-scarred ruin. While he may not be well known for the optimism of his work, there is usually a redemptive core to Maguire’s projects, a belief in human goodness and resilience. For once, those qualities are in something like abeyance, and the artist’s profound unease is palpable.

Irish women artists to show at $€X¥ in the snow