The screaming cult makes its way to Galway 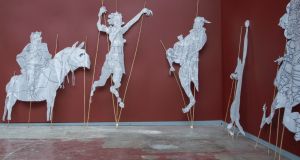 Tulca Festival of Visual Arts Galway 2017: They Call Us The Screamers

The Atlantis commune had its roots in a “radical primal commune” in London in 1970. That same year, Arthur Janov (who died in October), published his controversial ideas on primal therapy in his best-seller, The Primal Scream. Janov believed that people repress childhood traumas at huge psychological cost. Bring them back to the moment of trauma, unleash their feelings and they will be set free.

Janov’s therapeutic theory gained purchase with a huge, diverse audience, including such celebrities as Mick Jagger, John Lennon and Yoko Ono, and he became something of a messianic and enduringly contentious figure.

In 1974 Jenny James bought a three-storey house in Burtonport, Co Donegal, moved there from her London commune and established the Atlantis commune, which soon became a cause célèbre, attracting much negative comment and coverage. James’s book on the experience was titled They Call Us the Screamers, and primal therapy was at the heart of the Atlantis philosophy. Unconditional emotional honesty was obligatory, on the basis that concealed emotions bred problems.*

In 1980 the Atlantis members quit Burtonport for the more extreme setting of Inishfree. By all accounts, communal life on the island was more volatile, challenging and erratic. Eventually James moved again, this time to South America, settling in a remote region of Colombia. Despite a tragedy in 2000, when one of James’s grandsons was brutally murdered by a drunken Farc commander, Colombia is still the commune’s main location. There the focus seems to have shifted from primal therapy to ecological idealism.

When he proposed that this year’s Tulca use the Atlantis community as a springboard to explore the countercultural impetus of the 1960s and 1970s, inviting artworks that address alternative ways of organising personal, social and political lives, curator Matt Packer could not have imagined that the commune was still controversial. But it is: some experienced it as more traumatic than therapeutic. Tulca was quick to clarify that the intent was not to celebrate or validate Atlantis. In a way, the problem is that Atlantis is not just a historical curiosity but a fascinating, contentious story involving many people and significant issues. On the one hand Tulca embraces it as a powerful symbol, on the other, it must escape from the shadow of Atlantis.

In the event, it manages to do both. There are 17 participating artists, incorporating three collaborative partnerships. There are 13 new projects. Several pieces relate directly to Atlantis, notably Bob Quinn’s short 1979 film on the commune, The Family. The film, commissioned by RTÉ as part of an abortive series on alternative lifestyles, still packs a punch, not least in documenting emotionally – and to some extent physically – aggressive therapy sessions. They are unsettling to watch.

Photographer Yvette Monahan visited Inishfree. Her landscape studies suggest an environment possessed, even haunted, by uneasy memories. The uncanny note is echoed in a series of lumen prints made with sods of turf from the island.

Janov dissociated himself from Atlantis and other groups who used methods seemingly based on his primal scream therapy, but the commune certainly drew on his theories and methods. Yoko Ono was one of those who signed on for his treatment. Packer noticed that in her pioneering artist’s book Grapefruit, first published in 1964, one of her 150-plus “instruction works” is an instruction to scream: specifically to scream against several restrictive social conventions and frameworks.

He contacted her studio and asked if he could use that page of the book as a piece in Tulca. She assented. Her contribution is the page, freely available in postcard form, which you can find at Galway University Hospital.

New York artist Liz Magic Laser’s video centres on primal therapy workshops. The participants, though, are political campaigners of several persuasions, and the workshops were conducted during the Brexit referendum campaign and the 2016 US presidential election. In a more radical workshop proposal, Siobhán McGibbon and Maeve O’Lynn offer a self-help primer for those experiencing an extreme alternative: the emergence of new, hybrid interspecies beings.

Atlantis has evolved from one incarnation to another, but did the countercultural ideals of the 1960s and 1970s effect lasting change or were they just absorbed into materialist orthodoxy, as hippies became entrepreneurs? That did happen, but several Tulca projects suggest that the dream of a nonmaterialistic alternative persists. Sam Basu and Liz Murray, based since 2007 at their Treignac Project, a large art project space in rural France, are trying to address alternatives in a practical as well as a theoretical way. Basu’s big charcoal drawings, like “hurried diagrams of an imaginary new world order”, chart networks and patterns, with motifs that refer to “the emergence of a new formation”.

Networks and ideas appear in different form in Ciarán Ó Dochartaigh’s sculptural piece, an arrangement of rounded forms in glazed ceramic and polished wood, linked by tubing and presented like a sophisticated architectural model. The objects were shaped with electrotherapy massage tools.

Lucy Stein’s installation marshals clay paintings on sheets, inflatable objects, Sheela-na-gigs (which she fashioned from Salthill clay), plus other materials and a wall text. It is, in all, a goddess cult shrine – Atlantis rejected masculine authority and was consistently matriarchal.

By comparison Richard Proffitt’s shrine at 126 is moodily introspective with occult overtones, ritualistic objects, images and assemblages, an eerie, brooding soundtrack and a narration that is detailed and precise but eludes understanding. It really does take you into another space, another mindset.

If this all sounds a bit heavy-duty, Danish artists Kasper Opppen Samuelsen and Marie-Louise Vittrup take a more humorously sceptical view of social reinvention. Their heterogeneous “fantasy community” of drawn characters share an isolated peninsula with, and are perhaps implicitly compared to, a flock of sheep. In stop-action video, they set off in search of an island, another future. But it’s a loop, and they are destined to perpetually re-embark in a work that seems to pay its affectionate respects to Watteau’s great, still puzzling painting, The Embarkation for Cythera, painted exactly 300 years ago.