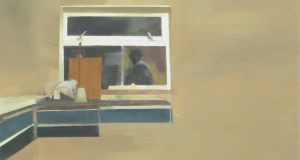 Primed Vision – Stephanie Deady
★★★★
Kevin Kavanagh Gallery, Chancery Lane, Dublin Until February 10th kevinkavanagh.ie
Stephanie Deady paints sparse, functional interiors, including her own studio, “the countertop in the kitchen of a friend’s house and the corner of a livingroom in Italy.” Though clearly not abandoned – occasionally there is a glimpse of a figure reflected in a window or fragmentarily glimpsed in passing, plus other signs of use and habitation – these spaces are short on home comforts, even when home is the location, and have an austere, even ascetic quality. At the same time, they are never emotionally cold. Deady’s close, conscientious attention to detail and space – she is good on the blankness of a blank wall – is almost tender, even in recording the chill glow of an electric light bulb.

Despite her attentiveness, or perhaps because of it, and despite the straightforward, precisely demarcated subject matter, puzzles and ambiguities emerge. Each work maps out a space, and uncertainties can arise in the arrangement of walls, panels, corners and openings. Even as Deady focuses on the details of boxed-in plumbing or electric cable, of false walls and improvised structures, the physical reality of the building fades to abstraction; a room becomes a metaphysical speculation in the manner of the Italian pittura metafisica painter Giorgio de Chirico or the surrealist René Magritte. That’s no mean achievement, entailing a form of pictorial alchemy in which a few simple materials become much more than the sum of their parts.

A young artist, Deady is thoughtful and measured. She never overplays her hand, allowing each painting to find its own logic and knowing when to stop. Nothing is over-elaborated, and the spare, almost minimal character of her representational method is important to the overall effect of the work. Colour is used with judicious restraint and contributes greatly to the emotional pitch of each image.

Deady graduated from LSAD in 2014 and has been living and working in Dublin since then. Currently, however, she is in Callan, Co Kilkenny, as the recipient of the Tony O’Malley Residency (which includes accommodation and a studio), and it will be interesting to see how this different environment informs the work she makes there. On the evidence so far, her judgment is good and every ingredient she introduces into her work more than earns its place.

The Breath From Fertile Grounds – Otobong Nkanga
★★★★
Temple Bar Gallery, 5-9 Temple Bar, Dublin Until February 10 templebargallaery.com
A line runs through Otobong Nkanga’s exhibition, appearing intermittently and assuming several different forms, from the solidity of a metal bar to a strip of vinyl tape. The line turns out to be metaphorically versatile. It’s a line between things, a link that might be personal, geographical or incidental, and also a line charged with and capable of transmitting energy. Extending between the two pillars that occupy a central position in the gallery, two metal bars meet in the middle in Handshake, a clever work that recalls Michelangelo’s Creation of Adam on the ceiling of the Sistine Chapel.

Based in Antwerp, Nkanga is Nigerian, and is known for projects and installations that might encompass drawings, paintings, constructions, natural materials, text and performance. She featured very effectively in EVA two years ago, and she has shown extensively internationally. No matter which means or combination she employs, her interest in the connections between people and places, as expressed in materials, is consistent – how particular substances or things inform not just identity but also impact on fortunes through forced displacement, for example. That’s a rich seam to mine, and she has applied herself to it with great inventiveness.

A visit to Dublin led her to visualise a worn, weathered urban fabric in which plants gain a toehold. Stubborn mosses and lichens find moist, unlikely nurture in inhospitable surfaces. Larger species flourish in the acidic, peaty soil in the uplands to the south. Life is determined to survive no matter how adverse the circumstances. In all it is, for Nkanga, a “space of remains and revitalisation.” There’s a promising body of material here, for sure. The gallery should become a kind of networked space of myriad interconnections and stories.

It does do that, though in a rather dry, theoretical way, which is a problem. Handshake is a high point, buzzing with energy and forming around a positively poetic image. But it’s the exception. For example, spread across quite an expanse of wall space, the title work is too stilted and literal, diagrammatic in the way it deploys its elements. The possibilities and ideas are there, but even though, to be fair, it is never less than interesting in offering us several trains of thought to follow, the show doesn’t really fulfil its potential and come to life, even though it is substantially about that sense of life. Despite glimpses of possibility, the ideas don’t take flight as they should.

The Comey Rule review: You actually begin to root for Trump