The best art exhibitions this week 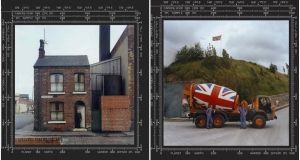 Taking his cue from Craig Raine’s poems in A Martian Sends a Postcard Home, Leeds documentary photographer Peter Mitchell applies NASA’s photographic format to the local scene, recording aspects of the everyday around Leeds (taken when he was working as a truck driver) as though he is a Martian visitor providing documentary images of his earthly explorations. As it happens, this exhibition was first seen in 1979, the year Raine’s book was first published.

The current recipient of the Tony O’Malley residency, Stephanie Deady makes austere representations of mundane domestic interiors. Despite the slow, carefully accumulated details in her images, though, they have a destabilising uncertainty, as though the fabric of memory has worn through in patches. Similar levels of uncertainty attend her landscape paintings. Things elude us, she seems to imply, despite the intensity of our attention.

Homo Ludens (Man at Play) – Five artists
The Library Project, 4 Temple Bar, Dublin Until January 27 print.ie
New Babylon was a utopian city imagined by Dutch artist Constant during the years 1956 and 1974. The idea was that its inhabitants were free to devote themselves to their imaginative, creative lives, freed from the need to work by extreme automation. Here, five artists who each play “with architectural elements such as the inhabitants of New Babylon” trace personal paths through the labyrinth of possibility. The artists are Irene Whyte, Daire O’Shea, Isabel English, Cará Donaghey and Margot Galvin. Róisin Bohan curated.

A taster for a Atherton After Ireland next September, as part of One Here Now: Brian O’Doherty/The Patrick Ireland Project 2018-19, consisting of multi-media work from across his – Atherton’s – extraordinarily diverse career. His brilliant In Two Minds, a conceptually challenging installation in which the artist interviews himself, was first seen at the Serpentine Gallery in 1978. Here it is reinvented as Atherton 1978 interviews Atherton 2018. Then there’s a “performative interview” with Sarah Hayden as interrogator: she’ll have her work cut out because Atherton is a quick-witted performer.