The Border blockages: ‘The rage and anger of the local people was so evident’ 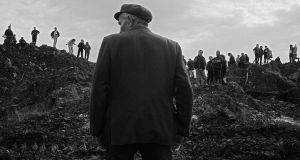 Farmers who had lands on both sides of the Border couldn’t cross over, they had to go the long way round. Photograph: Copyright Tony O’Shea 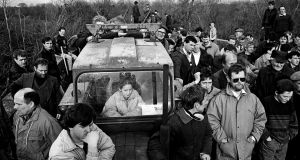 The first time Tony O’Shea photographed the people of the Irish borderlands was in the 1980s, in the company of the writer Colm Tóibín. But the memories of that time lingered in his mind, and in the early years of the 1990s he returned to the Border over and over again, intimately documenting many scenes of local resistance to military restrictions on Border crossings.

Why did O’Shea keep going back to this bleak, dangerous area of contested space? “I was interested in events taking place there, they were so important that you couldn’t really ignore it,” he says.

But it was the people themselves, as much as the politics, that really drew him – though as O’Shea notes, it can be difficult to separate the two.

“The rage and anger of the local people was so evident, it was palpable, and it did influence my approach as a photographer. I didn’t want to take photographs from a topographical point of view, I wanted to show how the everyday lives of those living there were affected by what was happening.”

“Whatever the effect on the IRA, the measures by the security forces greatly inconvenienced ordinary local people,” he recalls. “Farmers who had lands on both sides of the Border couldn’t cross over, they had to go the long way round, through the official checkpoint, and that could be a journey of 30 or 40 miles. Even the people who didn’t have land – if they wanted to do business in the North, say, they had to take these long circuitous routes.”

Reflecting on what it meant to be a photographer at work in such a fraught, complex political situation, O’Shea is pragmatic. “I was photographing what was happening on that day, at that time. There was no direction from me. It’s a kind of record, a document of what happened. Each person will bring their own approach to it, their own way of interpreting these images.”

What is striking in O’Shea’s photographs is the muddy desolation of the borderlands, and the intensity in the faces of the protestors. These are unmistakably images of the past.

But now, with Brexit, uncertain times are coming to the border again.

“I have no idea what’s going to happen,” says O’Shea. “But I do know that any great change from the way things are now won’t help the situation there. All the roads have been open since the peace process and the Good Friday Agreement, and that’s a great thing. Any reversal will be very negative.”

Border Roads 1990-1994 is available from caferoyalbooks.com

The British security forces tried to thwart IRA activity by blocking many “unapproved” Border crossings: bridges were blown up, explosives were used to blast huge craters in the tarmac surface of roads, or giant concrete blocks, reinforced by steel girders, were deposited, making it impossible for vehicles to get through.

“These obstacles couldn’t be moved without great difficulty,” remembers O’Shea. But that didn’t stop people trying to shift them, using whatever means they could: tractors, diggers, circular saws, spades, sometimes even their bare hands.

If a road was cleared of blockages and re-opened, there would often be a spontaneous parade of celebration, perhaps involving a marching band. One of O’Shea’s more surreal photographs shows a parade along a narrow track, led by a posse of teenage girls in uniform, waving white cheerleaders’ pompoms.

“Sometimes they were able to get a car or tractor through [the blocked road] and then they would have a march,” says O’Shea. “It was a minor triumph for them, a little victory against the military might.”

Outdoors is the future of live performance, and it’s time to get it right
4