Art in Focus: Bernadette Kiely’s ‘Flooded’ considers what lies beneath 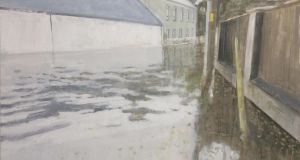 Flooded (2017) is one of a recent series of paintings by Bernadette Kiely that take the flooded landscape as their subject. They are a continuation of her long-term preoccupations rather than a response to recent flooding in Ireland. As it happens, the flooded landscape is ideally suited to her interest in conditions that veil what we are looking at and make us think again: blankets of mist, fog, or, in this case, floodwater.

Kiely’s early, textural paintings, encrusted with thick impasto, have gradually given way to the use of thinner, multiple glazes, often achieved through experimental means such as saturating a surface with a wash of colour, a process that is difficult to control. The ground beneath her own feet was usually the source of her imagery. Latterly she has looked to less immediate sources including news broadcasts, newspaper reportage, photographs and online documentary images.

Flooded forms part of Kiely’s exhibition So Much Water (so) Close To Home which opens next week at the Luan Gallery in Athlone, together with Marie Hanlon’s exhibition Water Table (a sculptural exploration of water’s dual character as precious resource and destructive force). Appropriately, Minister of State for the Office of Public Works and Flood Relief Kevin “Boxer” Moran is scheduled to speak at the official launch on Saturday, February 3rd (both shows run until March 25th). The location is ideal. Not only is Athlone all too familiar with the threat and unpredictability of flooding, the Luan Gallery is beautifully located, being perched over the Shannon.

Kiely’s experience of flooding pre-dates the large-scale episodes of recent years. For the past three decades her home has been a house and studio on a bank of the River Nore in Thomastown. Local seasonal flooding has always been a fact of life there, rather than something new. Likewise with her childhood home, on the banks of the flood-prone Suir. Her work has long been based on her experience of the Irish landscape, whether on regular drives via small rural back-roads between Thomastown and Carrick-on-Suir, or on daily walks in the countryside around Thomastown. This habitual familiarity led to her appreciation of the cyclical constant of seasonal changes, both subtle and dramatic: light, natural vegetation, water levels, crops, hedge-cutting, and stubble-burning. And also a growing sense of human lives measured against the changing face of the land.

Her exhibition’s title derives from one of Raymond Carver’s best known stories (in his collection What We Talk About When We Talk About Love). In the story, a woman re-evaluates her relationship with her husband when she discovers that he and a group of friends failed to report their finding the body of a young woman in the river, until they had completed their fishing trip. Kiely notes Carver’s treatment of ideas of “doubt, disconnection, conflict, identity and isolation”.

Environmental events, she feels, prompt us towards fundamental reassessment of ourselves and our relationship to the world around us.