Elizabeth Magill and the art of the skeptical inquiry 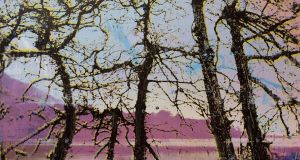 What is it?
Headland (1) is a painting by Elizabeth Magill, who has enjoyed an exceptional reputation as a painter since she began exhibiting in the 1980s (she shows regularly with the Kerlin Gallery). The bare, silhouetted trees in the foreground are defined by a pale yellow glow and the shoreline background is likewise illuminated by an ethereal light. What could be a normal scene has a magical, phantasmagoric quality. Many of Magill’s landscapes reference the Glens of Antrim, where she grew up (she was born in Ontario and studied in Belfast and London, where she settled).

How was it done?
Like many of Magill’s recent works, Headland incorporates a screen-printed photographic image. She paints on to the screen-print in this case and others, usually with a non-naturalistic palette, and often allowing anomalous intrusions into representational convention. The results are both real and dreamlike. In other works in the series, she’s used collaged elements and other applied materials. Earlier on, she applied sprays of glitter-like coloured dots to compositions, not that far removed from the sparkling highlights John Constable applied to his landscapes at the last minute, highlights that his RA contemporaries referred to as “Constable snow.”

Where can I see it?
Headland (1) features in Magill’s exhibition Headland in Gallery I of the Royal Hibernian Academy, Ely Place, Dublin from January 19 to February 25. The exhibition was initiated by and first seen at the Limerick City Gallery of Art. On Wednesday February 21 at 1.30pm and 6pm, three dancers – Mary Nunan, Isabella Oberlander and Mary Wycherley – respond to Magill’s work in Tilting, a live, improvised performance of 20 minutes duration (commissioned by LCGA). The event is free and open to all.

Is it a typical work by the artist?
It is typical, given that Magill is a fine painter, technically and imaginatively, whose work always has an edge of skeptical inquiry. Although she has often, quite reasonably, been associated with the romanticism of Casper David Friedrich, she approaches the territory of romanticism with a careful, analytical rigour. Wittgenstein’s celebrated proposition, “The limits of my language mean the limits of my world,” is an apt summation of her method.

From early on she’s been inclined to test the limits of the language of painting, not because she is trying to get beyond those limits and discard painting (though she has worked with video), but because that borderline, on the limits of possibility, is what interests her about it.

She has consistently undercut representational illusion, but also insists on the integrity of the pictorial spaces she creates. As she sees it, she is not trying to create visually accurate representations of particular places, but “to create a setting or space to place things, a kind of deposit of thoughts and observations within the framework of a personal and painting practice.”