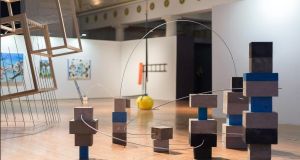 Carol Hodder muses on place and memory in her atmospheric, light-infused landscapes. They might seem to verge on abstraction but are always anchored to the palpable realities of land, sea and air.

Patricia Hunsinger’s interest in the transformation of living forms was spurred by the growth of her children. “The time that one grows from childhood to adulthood is fascinating.” In her recent print works, often using photographic processes, she considers a different kind of transformation, exploring the endangered and extinct species of the Susquehana River area on the eastern coast of the US.

Emerging from an artistic collaboration between Indian-born visual artist Shabnam Vasisht and Irish writer Cathy Dillon, this exhibition includes textile works, collages and prose poems in which Vasisht and Dillon respond to each other’s work, developing a cross-practice, cross-cultural conversation. The title derives from the motto of Visva-Bharati University in West Bengal founded by Rabindranath Tagore. Its motto reads: “Yatra visva bharati ekanidam” – “Where the whole world meets in a single nest”.

Siobhan O’Connor uses robust structural materials such as concrete and steel in ambitious architectonic sculptural works that use ides of “suspension, compression, weight and balance” in expressing almost paradoxical states of precariousness and fragility.