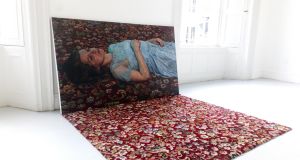 The starting point for A Brand New Darkness is the 1983 EP The Reptile House by Leeds-based goth-rock group The Sisters of Mercy. Two tracks on the 25-minute record are specifically cited, Lights and Valentine. They form a dark, moody evocation of a dystopian society. The exhibition is curated by Abridged, the Derry-based creative hub probably best known for the magazine of the same name. Published roughly three times a year, each issue marries visual and literary material under a general thematic heading. That heading is Relapse in the current issue, a concept that ties in with the rationale of A Brand New Darkness.

In its backgound information online, Abridged (personified by Gregory McCartney and Susanna Galbraith) mention TS Eliot and The Sisters of Mercy among its “many and varied” influences. In The Reptile House TS Eliot meets The Sisters of Mercy. Against an apocalyptic background, lyricist and vocalist Andrew Eldritch envisages a populace in a state of inertia induced by a combination of “drugs, reality television and the smack of firm government”.

In both Relapse and A Brand New Darkness, Abridged sees a recurrence of woes we might have presumed put behind us and consigned to history. That is, such things as the racial tensions, geopolitical manoeuvring, cold war rhetoric, neoliberal economic policies and an anti-devolution mindset, all associated with the Thatcher era, have re-emerged in different form with even greater force more recently. In short, Abridged are saying, we’ve relapsed. And the exhibition looks to this moment, not with an eye to prescribing solutions, but to test the cultural temperature.

That may still sound a bit ambitious in its sweep for what is, at heart, a modest enough if very good show. True, nuclear and other apocalypses do feature. Racism is alluded to, as is the question of how digital communications technologies have an impact on personal, social and political life. Plus an ambiguous symbolic interpolation that might be optimistic – or not. That’s Kelly Richardson’s Twilight Avenger, a video in which an ethereal stag, an apparition bathed in luminous green, appears in a woodland setting. This nervous beast may, the suggestion is, “represent the dawn of a new age or the defiant last gasp of this one”. Richardson, from Canada but based in the UK, uses digital imaging techniques in exploring the in-between world of contemporary urban culture, compounded of real and electronically imagined landscapes.

The work is not that dissimilar in mood to Lorna Simpson’s 2004 video Cloudscape, in which a stylish, smartly dressed man whistles a spiritual air as he is enveloped by smoke machine clouds until he is virtually obscured, at which point the cloud dissipates and he reappears. It’s a curiously moving work, and not only because the performer, the highly regarded artist Terry Adkins, died suddenly of heart failure 10 years later (he was only 60). As it happens, Adkins had originally intended to be a musician, and his work generally included a significant musical dimension.

As with Simpson, his work also explored and drew on the black American experience, and Cloudscape seems to allude to the central role of African-Americans in church, music hall, recording studio and film – with a certain sadness, so that it is a kind of lament. Adkins has great stage presence and a performer’s bearing and poise. The wooden floor and the smoke machine signal the theatrical nature of the set, elements of artifice that add to, rather than detract from, the rueful heroism of his persona. Cloudscape is a rich, concentrated piece.

Ian Cumberland’s hyperrealist paintings feature single individuals, usually youngish, prosperous looking, in comfortable if slightly antiseptic settings. Mirrors and other reflective, polished surfaces recur. The subjects appear anxious, strained, and the paintings are shot through with a feeling of unease as gaps or blanks open up in their spatial fabric, like slips in space and time. Cumberland refers specifically to black holes and the black holes in question appear to the screens and devices that swallow our attention in a hyper-connected, digital world, isolating and dehumanising people.

David Haughey’s monochrome paintings resemble news photographs from a post-apocalyptic zone. Their source is Yevgeny Zamyatin’s influential dystopian novel We, which has the distinction of being the first work banned in Soviet Russia, in 1921. Although a Bolshevik, Zamyatin was an early critic of the direction the revolutionary regime was headed and his novel describes a state of endless war. The paintings convey an atmosphere of dread, urgency and disorientation. In her post-nuclear apocalypse collages, Zoe Murdoch recalls the beginning of the atomic age together with its project catastrophic aftermath. It’s interesting that both she and Haughey evoke roughly the same era of modernity with reference to now.

Abridged sees Fiona Hession’s intense, abstract pen drawings as descriptive of mental pressures and strains. They are detailed, obsessive and repetitive, but also, with their circular format, calm and even serene, though one, Load, which is made with ink and pencil, seethes with simmering, internal energies. All of them are quite beautiful. Maybe not the apocalypse, then? Who knows? Not even The Sisters of Mercy: “…Ignore the voices, discard the day For the brand new darkness, for the bright new way.”