The best art exhibitions to see in the coming week

The hot climate, hares and an eavesdropping camera are among the highlights 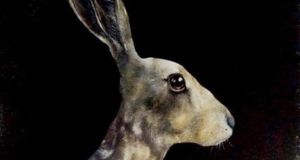 Painted through the long hot summer in progress, in the heat of San Antonio, Texas (39 degrees-plus), Daniel Rios Rodriguez’s circular paintings have an intense, ritualistic quality and a diagrammatic simplicity. He approaches the human connection with the natural world – a magical, mysterious and often harsh realm.

Last chance to catch a show of the work of academic and photographer Judith Aronson, who has made a speciality of informal portrait photographs of significant cultural figures. She has remarked that she aims to allow the camera to eavesdrop. Her subjects include the late Seamus Heaney, Norman Mailer, Diana Trilling, Saul Bellow, Sarah Caldwell and Salman Rushdie.

It’s What You Don’t See That Matters – Heidi Wickham

Having studied art in Bristol, Wickham gravitated towards Co Sligo, where she initially became involved in theatre – “writing, set & costume design.” From about 2004 she turned her attention increasingly to drawing and has become known for her vivid, fluent, sympathetic representations of animals, including that object of much artistic fascination, the hare.

‘Harry’s showgirl’: 10 things we’ve learned from the new book about Meghan and the prince
7

Battle of Cable Street: when the Irish helped beat back the fascists
Real news has value SUBSCRIBE