Art in Focus: Your Cyclical Nature by Michael Cannning

Canning’s intense, hypnotic studies of wildflowers will stop you in your tracks 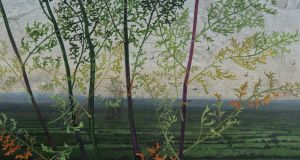 Where can I see it? Your Cyclical Natures – Sculpture Painting Drawing by Michael Canning

Yes. From about 2003, Canning’s paintings have conformed to a uniform, instantly recognisable format: an upright plant depicted in great detail against a receding background at what could be dawn or twilight. Although the picture surfaces are crisp and polished, the long, cumulative process of their making – each matures over a period of years rather than months – gives them a venerable air, all the more so because their sober representational style and atmospheric qualities recall renaissance painting in northern Europe. His paintings on paper have a comparably painstaking genesis. They are made on several conjoined sheets of paper, underlining the material nature of the image.

Canning was born in Limerick and first studied sculpture at the Limerick School of Art and Design, then at the School of Fine Arts in Athens, before going on to complete an MFA degree at NCAD. Throughout this process the sculptures he was making became flatter and eventually found their way on to the wall, and he moved on to making paintings. Your Cyclical Nature, though, includes four new sculptures. Using such materials as “cardboard, wire, glue, soot and plastic packaging”, Canning has made life-size representations of specific common weeds that have a short lifespan.

He has noted that the plants he observes may have traditional uses, as dyes or medicines, for example, and they may be beneficial or poisonous, but he’s not exploring those properties. The paintings’ titles, for example, are not the names of the plants they feature, but more general, allusive and tangential. They have variously related to music and musicians, saints, weather, perception, memory, stars and much more, as though the work is not about depicting and naming things, but a way of focusing attention, an aid to meditative reflection. Time, change and our ability to know, experience and understand the world emerge as consistent preoccupations. In sourcing the plants that he will paint, Canning said more than a decade ago: “I’m just looking for that which I feel I should have seen before, but never did.”