Patterns of light and colour that bear endless repeating

Iranian artist Monir Sahroudy Farmanfarmaian is strongly influenced by the traditions of her homeland, but her approach is informed by her years in New York’s art scene 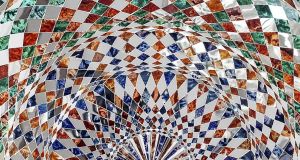 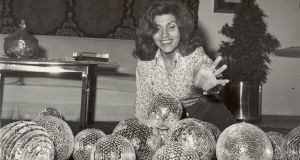 Monir Shahroudy Farmanfarmaian in her salon 1975, Tehran, Bukhara (Turkoman textile) in background. Courtesy of the artist and The Third Line, Dubai 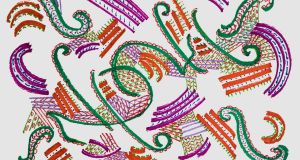 The Iranian artist Monir Sahroudy Farmanfarmaian has played a long game. A high point came last year with the opening of the Monir Museum at the Negarestan park gardens in Tehran. The museum is devoted to the display of her works and is a first for a female artist in the country. It’s also the more noteworthy given that she saw many of her works confiscated and destroyed following the Islamic Revolution in Iran in 1979. At the time, she and her husband, the lawyer and academic Abolbashar Farmanfarmaian, were in New York and felt obliged to stay there. Sadly, he never returned home, dying in 1991. She cautiously visited Iran the following year. But it was 2004 before she felt able to reopen her studio and workshop in Tehran. She has lived and worked there since, very productively and very successfully – in fact, her reputation has grown not just in Iran but also internationally since then.

Her return to her native country, and the opening of the Monir Museum, can be see in the context of a limited though definite thaw in the cultural climate in Iran. Even a prominent artistic exile whose work is more pointedly critical and engaged, Shirin Neshat, has enjoyed a degree of acceptance and visibility in Iran that would have been previously unthinkable. The Monir Museum is run by the University of Tehran. Farmanfarmaian gifted a group of her works to the museum in memory of her husband.

Farmanfarmaian – who uses simply the name Monir as an artist – was born in Quzvin, Iran, and went to study art and design in New York when she was about 20. The second World War was still raging, which ruled out Paris as a destination and meant a perilous sea trip to Los Angeles, from where she travelled by train to New York. She followed several avenues of study there and took keenly to the city’s social and cultural scene. However, her first, relatively short-lived marriage was to another artist and she found herself predictably cast as her husband’s aide and supporter. Still, she made important friendships – including the artist Milton Avery – and, following her divorce, made a life for herself and her daughter Nima.

A new phase of her life began with her return to Iran and marriage to Abolbashar in 1957. Even a quick glance around her retrospective at IMMA confirms that her Iranian background is the dominant source and influence on her development as an artist. She retained a fundamental attachment to her own aesthetic, rooted in the art and architecture of her homeland, even as she mixed with luminaries of the New York art scene, including Andy Warhol and others, while John Cage dubbed her, as Natasha Morris noted at the time of a Portuguese exhibition of her work some years back, “that beautiful Persian girl”.

When Warhol visited Tehran in 1976, Monir gave him one of her mirror mosaic balls – a prototypical disco ball

Monir’s decisive moment of artistic inspiration came not from New York but from a visit to the Shah Cheragh monument and mosque in Shiraz, Iran, possibly around the mid-1960s (accounts vary on the date, though she was in the company of two artist friends visiting from the US). Repaired and amended through the centuries, the exterior of the Shah Cheragh structure gives little hint of the dazzling interior, in which every surface, including the soaring central dome, is densely embellished with millions of mirror mosaic tiles, generating a kind of sea of fluid light.

Monir was transported – though not, it should be said, in any religious sense. While Islamic art and architecture, and Sufi numerology, are clearly formative for her, her view of them is secular and not religiously inspired. She enlisted the help of a master craftsman experienced in the traditional arts of reverse glass painting and mirror mosaic to create her own, contemporary take on the form. The first fruits of this process began to appear in the early 1970s. When Warhol visited Tehran in 1976, Monir gave him one of her mirror mosaic balls – a prototypical disco ball that found a home on his desk at the Factory.

Geometric patterning is part and parcel of Monir’s visual language. Symmetrical repetition, no matter how intricate and complicated, can become numbing and dull and, at times, that is the case with her work, when she seems to indulge in rhythmic pattern in a formulaic, predictable way. This happens occasionally but it is not the rule. And some entirely symmetrical pieces are superbly effective, thanks to the dynamism of her use of colour and light, always thoughtfully emphasised in the design of the exhibition.

Over the decades, she consistently plays freer, organic lines and forms against geometric abstraction, introducing a dance-like rhythm and energy, resulting in many brilliant pieces. Natural, organic forms win out in an absolutely beautiful series of small floral drawings, easily overlooked in the company of so much conspicuous light and colour. In these representational works, though, it is as if she draws on the certainty of an underlying abstract pattern without having to spell it out. That underlying pattern relates in an easy, fluent way to designed gardens, rugs and architectural structures. Equally, the drawings are monochrome, but infused with a sense of colour.

They’re particularly noteworthy because, like several sets of more variable, geometric felt-tip pen drawings on view, they are personal, immediate and spontaneous, whereas a great deal of the work in the exhibition, the bigger, more elaborate works, come from her workshop, where her designs are realised by and with trained artisans. Their skills in traditional techniques meet Monir’s sensibility, and the results would not have been possible within the traditional mould.

It’s often said that her work synthesises traditional Islamic art and design and Western geometric abstraction. Looking at the work, it’s not clear that she particularly needed Western abstraction, though she undoubtedly contributed to it. She certainly took what she needed from her nutritive, formative world in Iran and proceeded to work with it in terms of her own personality and inventiveness. The results are enriching and inspiring.

Small Hours: Who suffered most, John Martyn’s partners or his children?
6

In defence of workshops: A memoir of Eavan Boland
10