Busting out: art at Electric Picnic 2018 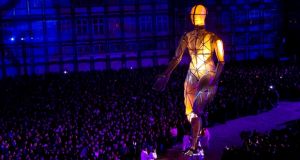 Come the end of the month, fifty thousand people will descend on Stradbally for the fourteenth Electric Picnic. Alongside catching The Prodigy, Massive Attack, St Vincent and a host of other acts on the various stages, ticket holders will also meander among art-laden trees, throw themselves down to snooze alongside art-hung sound-resistant walls, and maybe arrange meet ups at selected significant sculptures.

Beyond making useful meeting points, what is art doing at festivals like the Picnic? Is it the type of decorative window dressing necessary to transform a sheep farm into a venue where transformational experiences might take place? Does it challenge perceptions, as the organisers might like us to think, or is it more a cross between something tatty in the woodlands, with the occasional Instagram opportunity thrown in? Whatever its function, something compels the Electric Picnic organisers to invest just shy of one million euro in what Sorcha O’Reilly describes as, “the non-music creative content” for the picnic.

O’Reilly curates the art strands of the festival, which this year will include the work of more than seventy artists and arts groups, under various headings, and in various spots. These include the Art Trail, DIVA, the Trailer Park, the Hazel Wood, and PoPA (Place of Picnic Art). Having originally trained as a vet, O’Reilly came to the Picnic by way of a holiday job while she was at college. “Once you’ve joined the circus, you can run away from it a few times, but you always go back,” she says.

The same can be said for the artists, many of whom return year on year, growing their projects as they go. Two years ago, Ali Kemal made a small UFO-type object, and used it as a location for a DJ set. “It was meant to be for about thirty people,” says O’Reilly, “but loads turned up, so next year, we pitched it as a bigger project, and he built The Mothership. The idea was that aliens had happened upon the festival, and sent the news back for more of their kind to come.” This year, alongside Gabrielle Brickley, Kemal will build what O’Reilly is calling “Stargate”, and so it continues.

The most iconic festival art is at Burning Man, the mega-extravaganza in the Nevada Desert. There, festival-goers build their own extraordinary installations and pavilions, the centrepiece of which is the burning of a huge wooden effigy. This year’s theme, I Robot, will include a piece, “404 Technical Support”, in the form of a huge prone robot, by Dubliner, Darren Fitzpatrick. Burning Man’s avowed purpose is to celebrate radical inclusion, self-reliance, self-expression and participation.

Considered alongside this, the art at that other festival behemoth, Coachella, which takes place annually in California, frequently seems somewhat more corporate. According to Coachella’s own website, “This is art as landmark, public space and icon”; and the huge and colourful sculptures are slick and spectacular, such as the vast neon mirrored cubes, made in 2014, by American artist, Philip K Smith III. “There’s something exciting about the nature of these pieces being temporary – almost like a myth. ‘Were you there, did you see it?’” Smith said in an interview at the time, continuing: “That translates into the selfie discussion. I think selfies at installations are a digital marker to say ‘I was there’.” He’s right, of course, but when your art becomes all about the spectacle and the selfie, it’s losing the communal, experimental purpose that’s a key part of festival art.

“A purist might not even call it art, but I do,” says O’Reilly. “There are so many hugely creative people living non-creative lives,” she continues, describing the mix of professional and amateur artists, as well as those people who wouldn’t even describe themselves as artists, who respond to the annual open call to get involved with making art at the Picnic.

It’s more helpful to think of art at festivals like the Electric Picnic as a different kind of art. Imagine a Venn diagram of visual creativity. There’s a circle encompassing the art you see in museums, ratified by a consensus that has accrued over the years, from wealthy and powerful owners, to the judgements of art historians. Beside this, overlapping, but only slightly, are the gaudier baubles of today, these are works by the likes of Jeff Koons and Damien Hirst, valued initially for their shocking newness, but more recently because of the shockingly insane prices paid by people afflicted with a very specific type of taste.

In another circle is art made by people who would probably really prefer to write difficult books: and then there’s the creative outpourings of people who have mad ideas, and love to make and do. That’s the festival art circle in our diagram. And yes, all are valid as art, but the expectations, expertises and speeds of their different audiences make each relevant in a different way. You are entirely unlikely to be in the mood to ponder the problematic juxtaposition of urban dystopian experience within a rural modality when you’re hanging out drinking cans in a field, while waiting for Kendrick Lamar to come on. In fairness, most people are unlikely to want to do that anyway, even though the thought that it’s nice to be out of the gritty city for a while might have crossed their minds.

So, while some art is purely decorative, some provokes deep thought, and some symbolises the wealth and taste (or lack of it) of its owners, yet another kind of art is all about accessing creativity, whether as a maker, or as someone who comes across it by surprise. Equally, our mental and emotional expectations are different when we have decided to go to an art gallery, or opted to dress up in glitter and hang out with a gang of people who may look, wittingly or unwittingly, like performance art themselves.

“I think probably there are going to be some artists and people who have studied art history, and they’ll understand a piece differently, but the vast majority are experiencing it on a subconscious level,” says O’Reilly. “It’s going straight from visual to feeling. There’s no doubt the art changes people’s behaviour, she continues. “I don’t know why that is. It may be similar to how great architecture can calm people down. Why it happens on a larger scale, I don’t know. Maybe someone will do a study on it sometime.”

As an example, O’Reilly describes the large acoustic wall that is built to dampen sound between areas of the Picnic. One year, they painted it white, and used it to show large art works made by a team led by Limerick artist Clare Hartigan. “It’s a crossroads at the Electric Picnic, so everyone is passing there, it’s very, very hectic. When we put the art on it, it really calmed the space.” People began to relax there, to sit and chill. Art can do that for you.

Hartigan herself came to the Picnic by way of a small stall for the Trenchtown area in one of the very first years of the Festival. “Then I applied to the Art Trail. I made a complete mess of it, I don’t explain myself well in print,” she says. But O’Reilly phoned her, and a relationship developed, which has seen Hartigan make work for the Picnic each year, and work with other artists on projects as well. This year, Festival CEO, Melvin Benn, contributed to a trip for Hartigan and fellow artist Gary Murphy to New Orleans, to get up close and personal with the Mardi Gras parade and floats.

Hartigan describes a visit to the vast warehouse where the floats are stored. “They were beautiful, and when I got close I saw they were made of paper. It was the paper that really caught me, I wanted to try and translate that. But with our weather, that wouldn’t gel. We were rolling around the garden laughing at the things we’d built that weren’t going to work,” she recalls. Instead, this year, she has come up with a metal piece, made with the help of her dad, metal fabricator Leslie Hartigan. It’s a figure of a woman, which will emerge from the lake at Stradbally.

There’s “a hole in the arts”, says Hartigan, describing a lack of space for artists who aren’t brilliant form-fillers, who don’t fit the gallery model of working, the capitalist model of valuing, or the academic model of thinking. “I love the festival thing,” she concludes. “Maybe it works because it’s quite random,” adds O’Reilly. “There’s no theme, so it pulls you out of your day-to-day. You see one funky thing, then another, then another… And now you’re in their world.”

Art Highs at the Picnic

This year, Catalan super-troupe La Fura dels Baus come to the Picnic, and to Ireland for the first time. Expect a forty foot high aerial net of people, dancing (or writhing) to music, while being conducted by a massive transformer-style puppet.

Festival goers can re-write the ending of Beckett’s enigmatic play, if they like, when Ferdia Murphy’s full-moon set for Gare St Lazare’s Waiting for Godot is installed in the woods.

Annika Stidh’s Leavin’ the lights on is a series of open air rooms, handy for anyone that might fancy some home comforts, with an art-twist, of course.

Granny’s Gaff from ArtLot returns, and this year it’s grown, with a second storey to delight lovers of retro kitsch.