The Liffey Swim: How Jack B Yeats and his painting won an Olympic medal for Ireland

To celebrate the 100th Liffey Swim, An Post is releasing a stamp featuring Yeats’s painting 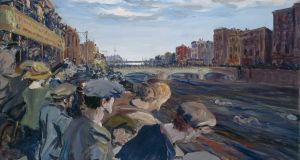 The Jack B Yeats painting.

The cultural significance of the Liffey Swim in Irish life is underlined by the Jack B Yeats painting of the same name, which captured the 1923 race and went on to win the first Olympic medal for the Irish Free State when it won silver at the 1924 Olympics in Paris.

Art, broken down in five categories, featured as a medal competition at Olympic Games between 1910 and 1948. Entered paintings had to be inspired by sport, and Yeats also entered Before The Start, an oil painting of three jockeys before a race began.

Who beat Yeats? The gold medal winner was Jean Jacoby from Luxembourg. He submitted and won for three paintings: Corner, Depart and Rugby.

The Liffey Swim oil painting, now hanging in the National Gallery, features spectators watching the race as the swimmers are approaching O’Connell Bridge. The man wearing the brown fedora is thought to be Yeats, and the woman in the yellow hat, his wife Cottie.

The painting inspires current competitors, as 2015 winner Donncha O Siadhail explains. “When our son Ronan was born, he was born in the Rotunda. On the third floor, as I was walking down to meet him, there’s a picture of the Liffey Swim just up on the wall. Every year I’m in the Liffey I’m thinking of that painting.”

To celebrate the 100th Liffey Swim, An Post is bringing out a €1 stamp featuring the Yeats painting. Last week, as part of its publicity for the 100th race, Leinster Open Sea recreated the painting on the city’s quays.

How the British faked ‘battles’ during the War of Independence