In search of Una Watters and her ‘lost’ paintings

Many works by the Irish artist, born in 1918, have disappeared 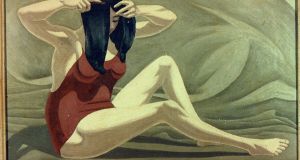 Have you seen this painting? Girl in the Sand (1950) is one of the ‘lost’ works by Una Watters

It was a wet windy Monday morning in December when we arrived at the Emerald Ballroom in Ballinasloe. We weren’t there for the dancing. We were on a quest of a different nature. The ballroom on Society Street, an austere, 19th century limestone street, is one of several public buildings that has been repurposed. The school was once a courthouse, part of the convent has been converted into a library and the former ballroom is now a community hub, hosting clubs and sporting activities and offering social services, such as the town’s jobs club.

That’s where we headed with our unusual request.

Ita Hodgins, who works in a coven of offices on the second floor, is probably more used to typing out CVs or coaching applicants for job interviews, but with the pragmatic grace of a true public servant, she didn’t fob us off when we said we weren’t looking for work, we were looking for art. Art we weren’t even sure existed.

We’d been led here on a rumour that a set of watercolours by the Dublin painter Una Watters (1918-1965) was somewhere in the building. They had been gifted to the bridge club (which once met in the ballroom) by her husband, Irish language poet and novelist, Eugene Watters (Eoghan Ó Tuairisc), a native of Ballinasloe, shortly after her sudden death 53 years ago.

So why the quest? Why had we – a novelist (me) and a “recovering” academic – become amateur art sleuths? We were way out of our comfort zone. The answer is simple. Admiration. My partner, Colbert Kearney, was gifted a painting by Watters, called Girl Walking by Trinity in the Rain (1959), and we have always adored it. (Other owners whom we’ve met, feel similarly evangelistic about her work and we’ve grown used to visitors exclaiming over the striking quality of ours and wondering why she isn’t better known.)

Colbert was a pupil in St Canice’s primary school in Finglas, where Eugene Watters taught in the 1950s, and remembers seeing many of Watters’s works being painted on an easel set up in the kitchen of their cottage at Cappagh Cross, Finglas, a once rural idyll now swallowed up by motorway construction. When Colbert came to write a memoir of his early life in Finglas, (Down by the Liffeyside) he knew exactly the image he wanted for the cover – Cappagh Road by Watters.

So who was Una Watters? Born Una McDonnell, she went to school at the Holy Faith Convent in Glasnevin and attended the National College of Art on the encouragement of the painter Maurice MacGonigal. She studied part-time, juggling her studies around her day job as a librarian. She met Eugene Watters at a dance in the Teacher’s Club on Parnell Square and they were married in March 1945; they honeymooned in a horse-drawn carriage which Eugene had built. They were a devoted couple, summering in Ballinasloe, fishing in the River Suck and making art.

Watters is remembered by those who knew her as a gracious, gentle woman, but as an artist, she worked tirelessly. She sketched, was involved in magazine and book illustration, calligraphy and design. (She won the Arts Council award for the 1966 Easter Rising commemoration symbol, based on the Sword of Light/An Claidheamh Soluis, though sadly did not live to enjoy her success.) She worked in oils and watercolours, painted portraits and landscapes and in her latter career, interestingly, developed an angular, almost cubist style.

One of her paintings, The Four Masters (1959), still hangs in Phibsborough branch library where she worked. Another, The People’s Gardens (1963), is in the collection of the Dublin City Gallery (Hugh Lane). Annunciation (1948/49) featured in the 1949 Irish Exhibition of Living Art, founded by Sybil le Brocquy, mother of Louis le Brocquy, to promote Irish modernist painting. Watters showed seven times at the RHA and was a frequent exhibitor in Oireachtas competitions. She was also a member of the influential Society of Dublin Painters which featured a strong female membership, among them May Guinness, Grace Henry, Mary Swanzy, Mainie Jellet and Evie Hone, with whom she also showed. Yet Watters remains an unknown quantity in this company.

Our mission is to counteract that, by tracing as many extant Watters paintings as we can with a view to mounting a retrospective exhibition. In 1966, Eugene organized a memorial exhibition of 37 of Watters’s oil paintings, after which, heartbroken by his loss, he distributed all of her work among family, friends, relations and acquaintances, which is how Colbert came by Girl Walking by Trinity in the Rain. This gesture has, ironically, made our quest more difficult, because there’s no paper trail or provenance documentation had the paintings been sold. Nor do we have images of most of the “lost” paintings.

With the help of the McDonnell and Watters families, the couple’s wide network of friends, and using the 1966 catalogue as a guiding source, we have managed to track down 16 of these works and are on the lookout for more. Along the way we’ve discovered other works by accident that did not feature in this show. Like the mythical Emerald Ballroom watercolours.

The ghosts of dancefloors past accompanied us as Ita Hodgins led us around the second floor balcony at the Emerald. There was a time when this place would be heaving on a weekend night. On that Monday morning, down in the well of the hall, there was a group of pensioners playing bowls on a green felt alley fed out by a giant roller. Where young blades might have stood hanging over the rail ogling the talent below on a Saturday night, now there were partitions – presumably on health and safety grounds. Perhaps because of this, or because Hodgins, who had a strong folk memory of the Emerald but couldn’t recall any paintings on the walls, we felt pretty deflated.

Nonetheless, she humoured us. Armed with a bunch of keys, she suggested looking first in the former bridge room, now used for computer training. The ceiling of the once high room had been lowered, typing pool rows of computers filled the floor space, but as soon as Ita threw the door open we saw them – nine watercolours by Watters bolted to the wall. It was as big a surprise to her as they were to us. The walls around them had been repainted numerous times over the years but the frames had never been moved. The light of years had faded them, but they were here. They existed! The building’s caretaker was called and he rooted about in a storeroom and found another five. We couldn’t believe our luck.

Girl in the Sand

The watercolours depicting impressionistic landscapes and flowers are delicate and ethereal. They were completed in the last months of Watters’s life and were perhaps studies for a bigger work, though they have a real minimalist charm in their own right. Even though they had hung on the walls for more than half a century, we felt that these works, much like Watters’s reputation, had receded into invisibility. For us, it was like they had just been painted and we were the first to see them.

We know there are at least 21 more oil paintings by Watters out there, and there may be more we don’t know about. We’re particularly interested in tracing Girl in the Sand (1950), Silken Thomas in the Tower (1956) and Woman Sewing (1958), as well as two more Finglas paintings, Schoolbreak (1960) and Building Scheme (1961) companion pieces to Cappagh Road, for which we have no images.

Watters always signed her paintings in the same way – UW in large, often italic, capitals in the bottom left or right hand of the work. If you think you may have an Watters Watters, or know someone who has, please contact me at mary.morrissy@gmail.com.