Over three exhibitions, nag’s Mark St John Ellis weaves together East and West, painting and ceramics. The results are nothing less than intriguing 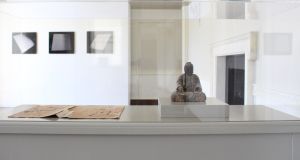 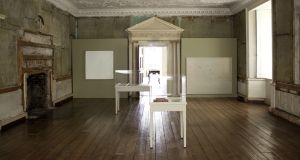 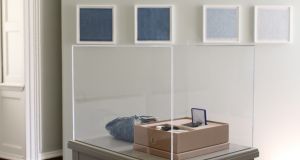 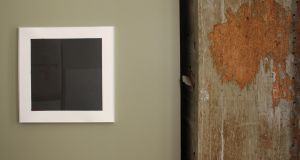 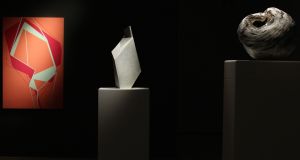 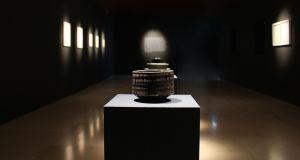 When still based in its Francis Street basement location, nag was the venue for a series of shows built around items from the personal collection of John Hutchinson. Although he was director of the Douglas Hyde Gallery for 25 years, Hutchinson’s collection, if what we’ve seen of it in the nag projects is anything to go by, consists of an eclectic mix of objects rather than cutting-edge contemporary art; objects made with great skill and aesthetic sense, but often utilitarian rather than intended as fine art. Such is the case in the latest collaborative venture at Rathfarnham Castle.

In the hall and several adjacent rooms, works by four artists, Helena Gorey, Kristina Huxley, Jane Proctor and Masashi Suzuki are juxtaposed with several items of Hutchinson’s. The latter include Japanese tatoushi and a furoshiki, an Iranian woven bag and a weathered carved figure of the much-revered Buddhist figure Jizo Bosatsu. Tatoushi, an accompanying note explains, are rice paper sheets designed for wrapping kimonos, although the 19th-century examples on view were in fact used for wrapping things in a pawn shop, presumably indicated by the calligraphic inscriptions. Furoshiki are used as wrapping as well – for gifts, or shopping. The Iranian piece is described as woven, like a small rug, by a nomadic woman early in the 20th century.

In choosing the contemporary artists, Mark St John Ellis has characteristically gone for work that is minimalist, not particularly in the sense of being aligned to the minimalist movement, but minimal in form and statement. Jane Proctor’s coloured drawings are not so much drawn as woven, consisting as they do of densely textured linear compositions adhering to an implicit grid pattern, subtle and meditative.

Roseanne Lynch photographs architectural spaces, or light and shade in such spaces. Deep shadows and mellow falls of light define her sculptural images, which have an almost sacramental quality. Kristina Huxley’s contribution is site-specific in that she immersed herself in the physical substance of the Castle’s thickly accreted history. As a site, it is exceptional in acknowledging its layers of changes through time: it is an unfinished place, offering multiple glimpses into different points in time. Contemporary works on the building have produced evidence of some of the many stages of its history, but there’s no pretence at contriving a pure, original version. Additions, revisions, subtractions and transformations are what it’s about.

Huxley has combed the rooms and looked up the chimneys. She shows a number of archival boxes containing physical traces recovered: scraps, soot, dust. Mixing soot with wax, she’s made facsimiles of a stash of musket balls discovered during works to install a lift. It is terrifying to imagine lumps of lead of that size flying around. Her paintings are based on the random patterns of marks on the walls engendered by time. They are cool and quietly intriguing and recall some of John Cage’s compositional strategies.

Helena Gorey’s paintings, whether in oil or watercolour, are close-to-monochromatic expanses, but with the unmistakable air of containing multitudes within: that is to say, many underlying layers, distilled into a final surface. There is an easy, unforced relationship between the artists’ works, quite distinctive as they are, and the beautiful setting of the castle’s first-floor rooms. Masashi Suzuki’s ceramic bowls and their matching boxes feature only incidentally, in a display cabinet in the entrance hall, but they too are in keeping with the overall installation, and they provide a link with nag’s other two current shows at Farmleigh.

It’s a fruitful dialogue, and an international one: Katherine West is the one Irish ceramic artist included

Two shows rather than one, as the feeling in each of the two galleries is quite different. The first places a series of paintings by Gareth Jenkins in the company of ceramic vessels donated to the State following the 2014 assembly of the International Academy of Ceramics. Jenkins’s paintings typically comprise angular, linear structures against flat grounds. They have a dreamy, speculative quality. Rather than describing structures they are trying them out, suggesting possibilities.

Under the title Structure and Forms. Chaos, St John Ellis has juxtaposed them with a variety of forms, from densely, intricately organic to angular and square-cut.  It’s a fruitful dialogue, and an international one: Katherine West is the one Irish ceramic artist included. The others are from Europe, the United States, Japan and Israel.

Gallery 2 strikes quite a different note. It’s an altogether more intense experience pairing Suzuki’s hand-thrown vessels with Kohei Nakata’s paintings. From his spare, carefully considered beginnings some years back (he spent time at NCAD and is now back in Japan), Nakata has been refining his approach to painting. As with Proctor, there is an overlap with weaving. In fact, he is currently engaged in growing his own cotton to work with. In the meantime, he has made a series of woven paintings, titled simply Weaving Paintings, using lines of pearl acrylic on birch plywood.

They are very subtle, acutely receptive to the available light and surroundings. They change constantly in appearance, picking up hints of light and colour as you move. Earlier pieces in which colour is used are included. Nakata is uncompromising. St John Ellis refers to the idea of the void, and to the notion that a stringently reductionist approach can bring you to the point where you make something that might equally contain everything or nothing.

To get the most out of nag’s three-part project, it is well worth taking the time to see all three strands: three differing, complementary, concentrated experiences.