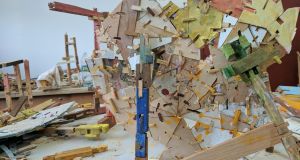 Untitled, 2018 is a “constructed painting” by Helen O’Leary.

There is an improvisational look to O’Leary’s constructions. Lengths and panels of wood, new and recycled, are carefully but conspicuously joined in composite arrangements with linen. “I knit with wood,” as she describes it. The paint – and she describes the finished pieces as paintings rather than sculptures even though they are often three-dimensional – is egg tempera. Her palette is quiet and muted, harmonious and inclined towards the classical (marble dust contributes to the chalky texture), so that although the works are clearly contemporary, they can have a weathered, venerable aura. As structures

they can appear tentative and fragile, but their poised vulnerability is certainly part of their appeal.

O’Leary is one of three artists featured in an exhibition, Ozio, at the Taylor Galleries, 16 Kildare Street, Dublin (Until October 20th, taylorgalleries.ie). Her co-exhibitors are the renowned Irish sculptor Janet Mullarney, well known for her allegorical figurative works in a variety of media (she is virtuoso carver), and Munich-born Nataly Maier, who is showing an extensive series of small egg tempera abstracts, their colours inspired by Renaissance paintings in European galleries.

It is typical. O’Leary’s work could be described as an ongoing dialogue, with each new piece in conversation with its predecessors. Her studio she has likened to an archaeological site. O’Leary was born in Co Wexford and studied at NCAD before going on to the School of the Art Institute of Chicago. She has been based for some time in the US. She teaches at Pennsylvania State University School of Visual Arts. Earlier this year she was awarded the American Academy in Rome 2018 Prize for Painting. She continues to spend time in Ireland each summer.

Ozio refers to a state of idleness, but in this context it’s a productive idleness, a pause that gives you time to follow an unknown and unanticipated path because it seems interesting. O’Leary is a natural fit in such a show, because she has long practised just such an approach. From early on she has been interested in approaches and procedures that examine the nuts and bolts of painting, not to dismantle it in a spirit of aggression or opposition as, say, some conceptual artists have done, but to arrive at its core potential.

For some time she did that in terms of the flat, two-dimensional surface, and sometimes making sequential and multi-part works, and then, especially from the early years of this century, she moved decisively into three dimensions. The effect was liberating and has opened up multiple lines of possibility for her. Several other Irish artists are kindred spirits on one level or another: Tadhg McSweeney being one, and equally, Paul Mosse and Mark Swords.