Aidan Dunne: Ursula Bourke and NagOffsite offer perspectives on how the past inhabits the present 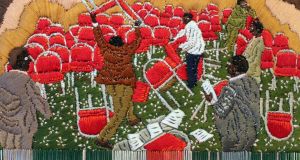 Ursula Burke, Nigeria (detail from Embroidery Frieze – The Politicians) at the RHA

RHA Gallagher Gallery, Dublin 2, until October 21st; rhagallery.ie
★★★★
It’s rare that an artist is described as working in “three distinct areas… embroidery, porcelain and drawing”, but such is the case with Ursula Burke. The RHA’s capacious main gallery is given over to her formidable treatments of each. The Precariat, her show’s title, indicates that she has in mind what has been described by some sociologists and economists as the 21st century’s emergent and fundamentally unstable social class, a mass of people whose lives are lived in a challenging state of insecurity, lacking the traditional guarantors of stability in closely related economic, social and psychological spheres.

A byproduct of neoliberal capitalism, the precariat have become, it has been argued, a destabilising political force, fuelling the populist momentum towards insular neo-nationalism, for example. However, a stroll through the three compartments of Burke’s show suggests that her work encompasses more than a targeted critique of neoliberalism and its evils. Broadly speaking, she uses traditional media, forms and techniques in ways that expose faultlines between the presumptions contained within them and the realities that they ostensibly reflect.

Her Embroidery friezes (The Politicians) use handicraft techniques in news media depictions of a number of contemporary incidents involving politicians coming to blows. Multiple coloured strands of embroidery thread stream down to the floor from the images as, figuratively speaking, the fabric of democracy unravels. The tempestuous energies of baroque history paintings are mentioned as points of reference.

Then, reworkings of classical portrait busts, fashioned in Parian porcelain, embody not the rich and the powerful, the social and political elite, but what might well be the battered and wounded precariat, caught up in the movement of global forces beyond their influence and control. Burke conveys all this very well. The individual subjects, injured and damaged as they are, retain a dignified, measured presence related to the classicism of their presentation.

Finally, a site-specific black-and-white wall drawing entitled Augury, is a monochrome recreation of a section of a celebrated Roman fresco that once filled the walls of a room in the Villa of Livia and has been relocated to the Palazzo Massimo in Rome. In its original setting and indeed experienced in full in the Palazzo, the fresco is an extraordinary immersive installation, a paradisiacal representation of a cultivated garden as a site of infinite fecundity with, impossibly, every crop coinciding at one moment.

Burke rather undoes this utopian image. Her meticulous rendering is a wan echo of the original and, as with the embroidery threads, the very fabric of the piece seems to be dissolving, leaking away. It does not augur well.

Group exhibition curated by Mark St John Ellis; Rathfarnham Castle, Dublin 14, until September 30th; nagallery.ie
Rathfarnham Castle dates back to the Elizabethan era, when it was built for Adam Loftus, who became Lord Chancellor of Ireland and the first Provost and founder of Trinity College Dublin. Two centuries later the fortified house was substantially remodelled, a major project that involved several leading architects of the time. It is now in the care of the OPW and when the OPW set about working on the building in preparation for opening it to the public (which it did, in October 2015), the layers and intricacy of its complex history became apparent.

Apart from the discovery of a trove of artefacts – including coins, glassware, Chinese porcelain, armour and ammunition – various modifications to original features such as “gun loops, fireplaces and fragments of doors and windows” were uncovered. Exciting as they were, these discoveries complicated the OPW’s task and meticulous archaeological monitoring and conservation priorities help explain the current internal appearance of the castle. Rather than disguising its history or offering a complete snapshot of one historical moment, the exposed surfaces, features and materials are a visible record of it.

Since its opening, the castle has been the venue for several exhibitions, including a sizeable retrospective of the paintings of Brian Ballard. In general the approach to exhibition installation has been conventional: that is, the use of false walls and screens. It’s a little like inserting a white cube into an existing context. There have been several signs of a progression from such an approach in the last few years, notably Richard Gorman’s major exhibition at Castletown, Co Kildare in 2016, for which his work was integrated in the fabric of the building.

More recently On a Pedestal, a show of contemporary reinterpretations of the portrait bust (naturally, Ursula Burke is one of the artists), was sited in Castletown’s beautiful Long Gallery (it’s now moved on to the State Apartments at Dublin Castle, where it can be seen until November 4th).

Curator Mark St John Ellis, previously of the RHA Ashford Gallery and Nag in Francis St, Dublin, and now making NagOffsite projects, has long been a champion of the idea of transcending the rarified atmosphere of the white cube while still carefully matching work to space. Offsite Projects is specifically addressed at locating contemporary art in “domestic and commercial environments of interest”, including period interiors. Earlier this summer he did just that at Farnham Estate in Co Cavan, an early 19th century building by Francis Johnston.

Now Ellis has taken on Rathfarnham Castle, and the work-in-progress nature of the building’s interior marries perfectly with his strategy of temporary intervention, reconfiguring the spaces, always focusing our attention on them, and often bringing out an unexpected, provocative edginess. In a nutshell, he doesn’t seal them in neat historical compartments but opens them up to the present.

The result is not at all like a conventional exhibition, but unconventionality doesn’t come at the expense of the work, which is enhanced in every case. The artists will be mostly familiar if you visited Nag in Francis St: Kohei Nakata’s subtle, beautiful paintings, Masashi Suzuki’s thrown or moulded ceramics, Gareth Jenkins’ poised, linear, acrylic abstracts, Ian Charlesworth’s carbon pattern composition (next to a rediscovered fireplace), Jane Proctor’s calm and calming ink drawings. Roseanne Lynch’s photographs address the magic dimension of architecture, a fine counterpoint to a novel nag presence, Marie Hanlon, who shows fine-tuned constructed sculptures. Four rooms and, every bit as much as the work they contain, the rooms are the exhibition.