‘You wouldn’t guess I’m Irish from my paintings’ 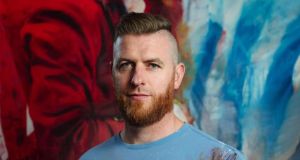 Conor Harrington: “Red and blue are the English teams and French teams, but they also represent Russia and America . . . All the dominant flags in the world seem to be red and blue.” Photograph: Owen Richards

In Brick Lane in London, away from prying eyes, is a nondescript building. It’s paint-splattered from floor to ceiling on the inside, and filled with giant canvases, work tables, paint-covered chairs and piles of books. And a saxophone. Around the size of a one-bed flat, the first half is the studio of Chloe Early, wife of Conor Harrington and fellow Cork-born painter. The second half is his wing.

“The studio is such a state,” he apologises as he shows me around, as if we expected it to be tidy. “I only just got racks to store my paintings. For the last five years, I’ve just had paintings leaning precariously against each other. The studio is small and I could do with a much bigger one, but I like the energy of east London.”

Filling up most of the room are three large canvases on display, ready to be shown in of The Story of Us and Them, his new exhibition at the Heni Gallery in Soho. The trio are heavy on red and blue; this is his first show themed on colour.

“They seem to be opposing colours in life. I’m really into hip-hop culture, and the Bloods and Crips were red and blue, and in boxing rings there’s a red corner and blue corner,” he explains, as we take a seat. “It’s also how the political parties label themselves: the Democrats and the Republicans, the Labour and the Tories. Red and blue are the English teams and French teams, but they also represent Russia and America . . . All the dominant flags in the world seem to be red and blue.”

And so, the colours represent today’s polarised society – need we mention the “B” word or the “T” words. While the topic is new for him, his signature classical-meets-street style is all there: the paintings are of uniformed historical figures that seem as if, mid-duel, they quantum-leap into the urban future, distorted and disorientated and bleeding down the canvas.

“My technique develops year on year, and this is my loosest body of work,” he says, explaining his progression. “I’m not as interested in the fine details or full realism like I used to be. It’s an easier way to get movement into the paintings. I also like to make it look like things are starting to crumble, which is pertinent with empires and politics. Five years ago, one painting would take five or six weeks, and I started to go a little bit mad. Now they take half that.”

It helps that he’s pushed to manage his time better, with their 3½-year-old child Séamus to attend to.

“Before I had a kid, I wasted so much time in here,” he says. “Now it’s more focused – I get it done and go home. I’m in at 10am and . . . well, I’ve been leaving quite late to get everything ready for the exhibition, but I never work at the weekends. I mean, over the last month I’ve worked at the weekends, but generally . . .”

In our recent interview with Chloe [irishtimes.com/culture/art-and-design/visual-art/chloe-early-without-family-we-are-all-lost-at-sea-1.3580805], she mentioned that Conor would soon become the primary parent.

“Between the two of us, we have flexibility, so it’s a decision we came to together,” he says of his change of focus. “I’ll still have to work, but I’ll definitely take a few weeks off.”

Another benefit of having a partner not only in the same profession, but also in the same building, is that their valued opinion is never far away.

“Chloe and I have been involved in each other’s work for so long, it’s almost like having a second me,” he says. “If I’m having a problem with a painting and I can’t find a way out, she can see one straight away. She knows my work so well. I know it’s not that common for husbands and wives to work together, but it works for us. I don’t think I could have a studio without her.”

I also like to make it look like things are starting to crumble, which is pertinent with empires and politics

Still, when it’s work time, “the door between us definitely gets closed. I listen to a lot of podcasts, like Second Captains, Malcolm Gladwell’s Revisionist History, This American Life, Radiolab, Scroobius Pip’s Distraction Pieces. And music: hip hop, and jazz, funk and soul like Fela Kuti. Quite a broad range.”

Indeed, his style was borne out of teenage love of hip-hop. Slipped into his 2016 Watch Your Palace Fall – half of which documents his canvas work, the other half, his street art – is a booklet entitled Foundations. In this, we see his early graffiti across Ireland: his tags, and what he later describes as “lots of guys with their hoods up”.

He was brought up “in the least creative household you could grow up in”, he jokes, and his love of drawing and graffiti encouraged him to enrol in Limerick School of Art and Design.

“But my appreciation of art was underdeveloped,” he says. “Like I could draw fruit and I could draw it really well, but when tutors suggested I try doing something with cardboard and a lightbulb, I just didn’t understand.”

His first paintings were these gents in hoodies, which he painted in classical-style alongside graffiti tags.

“I was trying to juxtapose the realism of the figure with abstract marks,” he explains. “Over the years I developed the style, then switched from guys in hoodies, which I called their urban uniform, to a more military uniform. I was interested in parallel between urban culture and colonialism, which sounds a bit of a leap, but both are about territory.”

For those narrowing their eyes at his work to find a hint of his Irish background, this is the only place you’ll find it.

“You wouldn’t guess I’m Irish from my paintings,” he says. “But my critical interest in that comes from the fact that I grew up with this colonised mentality, so I’ve had a curiosity about these figures of power.”

I grew up with this colonised mentality, so I’ve had a curiosity about these figures of power

When he and Chloe arrived in London in 2004, “I was told by a gallery owner that I’d never be accepted here,” he remembers. “Now I can see that the person was probably right because 10 years ago, galleries in London were much more conservative, and more concerned with class. They’d ask me where I studied and I thought they were asking because they were interested, but they were looking out for people who went to good schools, then on to universities like St Martin’s and Goldsmiths.”

With a bit of determination and a lot of talent – his murals in Belfast and Dublin are examples we can see around us – he not only penetrated the art world but conquered it. Jared Leto, Damien Hirst and Alicia Keys are among the owners of his pieces. And in 2015, he made headlines when his piece Dance with the Devil was the top lot (at €86,000) in a Bonham’s auction that included Banksy. Such successes have secured his future – he and Chloe own a flat in Brockley, southeast London – but it twists the meaning of the art appreciation for which collectors buy his work.

“I have to be aware of the art market because you have to have a business head on you, but it can be offputting,” Harrington says. “It’s naive to say that but it’s true. I want people to enjoy them and put them in their walls, but I know that loads have them in storage as well. I’ve met some collectors who are very clued up and obviously love spending time learning about art, but there are also collectors who just go on the advice of an art adviser, who send them in the direction of the same handful of artists. Again, it makes the art world very narrow. A lot of wealthy buyers just want to buy a Basquiat or a Richard Prince or a Takashi Murakami. They’re safe names. If I had all the money in the world, I don’t think I’d buy any of those. There’s much better art out there by more unknown artists.”

Looking to the future, he acknowledges that wanting to stay near his family means he has less time for murals, though it also transpires he’s also afraid of heights and turned down a commission in Las Vegas for a 100ft mural because of it. (“I start at the bottom and work my way up to the top, and there’s a worry that I won’t be able to finish the piece,” he says). But with a manageable mural in Croydon just complete and one in Beirut in the works, the dual side of Conor Harrington – the edgy street artist from Cork on the red side, the contemporary artist commanding five figures on the blue side – will be duelling it out a while longer.