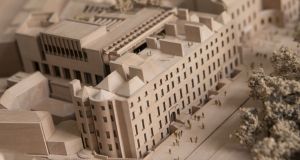 Scale design plans for the new Dublin City Library at Parnell Square Cultural Quarter. The design team, led by Grafton Architects and Shaffrey Architects, is currently finalising the planning application which will be lodged with An Bord Pleanala for consideration in the coming weeks. Photograph: Chris Bellew, Fennell Photography

The planned new Dublin City Library on Parnell Square – set to be the linchpin of a Parnell Square Cultural Quarter – took a further step today when its architects unveiled designs for its planning application this month.

The ambitious project, aiming to create a new cultural landmark for the city, involves 11,000 sq m of public amenity: a restoration of a Georgian terrace on the north of the square, and a dramatic new building behind it. The plan is for a two-year or three-year build, with a handover to Dublin City Council in 2023.

The library will be housed in six restored four-storey-over-basement Georgian houses at 23-28 Parnell Square (previously Coláiste Mhuire) and two other houses at 20 and 21 Parnell Square. Additionally, there will be a large new build behind 23-28.

The library will sit on both sides of Dublin City Gallery the Hugh Lane, and library and gallery will border a new public plaza. The newly-branded quarter includes the Irish Writers’ Centre, the Dublin Writers Museum, the Gate Theatre, Poetry Ireland and the Garden of Remembrance.

Farrell said it “celebrates the real value of city”, creating a new south-facing public space; it “renews wonderful 18th century houses with their beautifully-proportioned rooms and it creates a memorable 21st century addition, weaving the historic and the contemporary together in an exciting way”.

She and Shaffrey talked about opening up the privilege of access to Georgian rooms to everyone, as an amenity for the city, but also nationally and internationally, attracting an estimated 3,000 visitors daily.

With a budget of €100million, the new library will replace the Ilac Central Library. As well as having modern library facilities, it will include a music centre, design space, innovation hub and business library, 200-seat conference space, education centre, café and exhibition areas.

Dublin City Council will fund up to 45 per cent of the project, and at least 55 per cent is to come from philanthropy, said acting city librarian Brendan Teeling. Parnell Square Foundation, a charitable trust established by Kennedy Wilson (a global real estate investment company headquartered in Beverly Hills) is managing funding.

No State funding has yet been committed, and Teeling said it is a local authority project.

The sweeping contemporary design has a mezzanine level with views up and down, and lots of light from both east and west. It includes both intimate spaces and grand scale, a glass lift moving through the building, a roof terrace with views over the city, and roof gardens. to the rear, it will connect with Dorset Street.

Say ‘whistleblower’ and the Irish hear ‘informant’ or ‘snitch’
7