The Goethe Institut at 37 Merrion Square East is in the final stages of extensive renovations to its Samuel Sproule-designed 1787 house, and the building of a new 1,100sq m mews behind it. 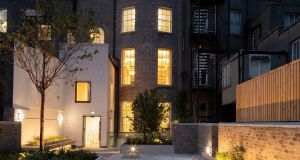 The Goethe Institute will be formally unveiled with four days of public events.

Standing in the hallway at 37 Merrion Square East in Dublin, Goethe-Institut director Thomas Lier and architect Martin Henchion are admiring a refurbishment and building project that has been in gestation for seven years.

They are now in the final stages of 2½ years of building work at the institute, which promotes German culture and language in Ireland, with the results to be formally unveiled on Wednesday, September 19th, when the institute reopens with four days of public events.

The project involved extensive renovation and remodelling of the Samuel Sproule-designed 1787 house, and the building of a new 1,100sq m (11,840.3sq ft) mews behind it.

While many will come for German classes, non-students can visit for performances and exhibitions, and library access

The five-storey mews – two of which are underground – will host the institute’s language school for up to 1,000 students, which is linked to the original house both at ground and underground level.

Lier and Henchion are tight-lipped about the budget for the project, which was clearly significant. But regardless of how much it did cost, the project represents a large civic investment by the German state in a significant cultural building in Dublin city.

Designed by Irish-German Henchion Reuter Architects (with conservation overseen by Shaffrey Architects), the project was commissioned by the German foreign office and managed by the German Federal Office for Building and Regional Planning (BBR) – the German OPW, essentially.

While many will come for German classes, non-students can visit for performances and exhibitions, and library access, and the public can also use the cafe in the Goethe-Institut, which is at basement level and run by Caryna Camerino (of the eponymous Capel Street bakery).

“Close your eyes and don’t look up yet,” says Lier as we are about to enter the library on the first floor – the Bel étage.

But you have to peek, and above are two stunningly decorated stucco ceilings, with gold leaf and foliage picked out in intricate detail. It took a team of six people 10 weeks to paint the ceiling. On the walls are two stencilled artworks uncovered under old wallpaper (a services engineer who worked on the house years ago pointed them in the direction of the mysterious hidden artwork).

Other standout features include leather-covered handrails on the stairs, and the windows in the mews have copper mesh embedded in six layers of glass. The result is a lot of glass that doesn’t look like a lot of glass.

It is below ground that the big money went – excavating and piling to support two storeys underground, with courtyards and lightboxes so it does not feel subterranean.