Art in focus: My Comfort and Joy, by Seamus Harahan and Thomas McCarthy 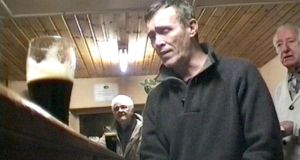 Still from My Comfort and Joy, Seamus Harahan and Thomas McCarthy

My Comfort and Joy

How was it done? Harahan filmed McCarthy over a period of several months. He uses a Sony Hi8 video recorder dating from the 1990s, producing video on a par with the Super-VHS format (with which it was designed to compete), and with good-quality sound-recording capability. During this time they visited the burial place of McCarthy’s paternal grandfather in north Leitrim, went to “a squat party in Dublin

”, an event with the Irish community in Leeds – Only Towers and Cement, featuring some of Harahan’s videos and a live performance by McCarthy – and the Willie Clancy Summer School in Co Clare. Harahan deliberately does not aim for a conventional documentary narrative form, rather he has “collected songs and fragments of a fragmented history”. The presentation in the gallery is similarly fragmentary, creating a landscape of recordings through which visitors can choose their own paths.

Where can I see it ?

Is it a typical work by the artist? It is typical, though it also marks a relatively recent development. Harahan has described his work as lying somewhere between documentary and music video. He grew up between London and Tyrone and has long been based in Belfast. Much of his material stems from his immediate environment there. Holylands, for example, was largely filmed looking out his front window.

He has used many musical genres besides traditional Irish – and English – music. His video has a casual, impromptu air, often documenting momentary, everyday activities in urban settings, with no post-production polishing, which can have the effect of enhancing its connection to the fleeting moment, making it seem almost incidental, and accidental – “recording before thought,” as he puts it. Overlaid music often counterpoints the imagery rather than directly elucidating it, setting up lines of association and speculation, though with Eileen Curran (which won him the prestigious Film London Jarman Award in 2015) and My Comfort and My Joy the music – and now the singer – are the subjects.  Both relate to the significance of inherited tradition, the way stories, songs and tunes are passed down through the generations, as with the Eileen Curran reel. McCarthy is the inheritor of a Traveller tradition of story-telling and music, a rich store of history and skill. His songs came to him mostly from his mother, Mary McCarthy, whom he says was an exceptionally fine singer and teacher, and a perfectionist, with an extensive repertoire of songs, many of which extend back many hundreds of years and are the precursors of more recent, familiar music.