A sense of the sacred in the Texan sun 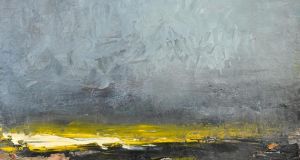 Kerlin Gallery, Dublin 2, until September 29th, kerlin.ie
We had, by Irish standards, a long, hot summer, but not quite up to the level of the summer that informs the work of San Antonio-based Daniel Rios Rodriguez in Bite The Tongue. Rios Rodriguez lives in the San Antonio river valley in south Texas. The river flows southeast and drains into the Gulf of Mexico via the Guadalupe river. Rios Rodriguez habitually walks along its path, this summer under a scorching sun. He gathers things as he goes, scraps deposited by the current, pebbles smoothed by its flow.

He incorporates some of these objects into the works he makes, which are more assemblages than paintings, though oil paint is a dominant ingredient, applied in thick, clotted masses of usually flat colour. In the past he has made quite elaborate constructions, but all the work in Bite The Tongue adheres to a circular or star-like format. The sun and the moon (with two pieces devoted to each respectively suggest), reign over all of the work, emphasising the daily cycle of time. In a precise though rough-hewn way he uses coarse rope and nails to frame the compositions, and to define forms and areas within the compositions, producing an effect like cloisonné enamel writ large.

Early on, while still a student, Irish artist Michael Cullen, travelling with artist Michael Mulcahy, went to Spain and on to North Africa. The work he exhibited on his return was like nothing else in Irish art at the time and had much in common with the tenor and intensity of Rios Rodriguez’s paintings. They are stark, diagrammatic, with a quasi ritualistic quality, as though rehearsing a symbolic iconography. Not that he is making pastiches of such artefacts with their sacred meanings. He is drawing on that visual language, and there is a sense of the sacred in his assemblages, doubtless informed by his experience of being in the landscape. He also draws on other, perhaps more readily familiar aspect of visual culture, including still-life painting.

He has noted the relevance of the eccentric Texan painter Forrest Bess. Something of a reclusive outsider, by choice, Bess made his living as a fisherman. He did have a profile in the art world, though it’s fair to say that his reputation has really grown fairly recently (he died in 1977). Inspired by, and perhaps fixated on, inner visions, he was intent on achieving an hermaphroditic state – which he did – convinced that it would lead to immortality, which it didn’t. He is one of those figures who produce remarkable work outside the conventional theoretical framework, and there is an element of that to Rios Rodriguez’s own approach.

Solomon Fine Art, Dublin 2, until September 22, solomonfineart.ie
Carol Hodder’s textural paintings are heavily worked – not over-worked, but built up in many tides and drifts of pigment worked in layers across the canvas. We feel the physicality of this process. You could describe them as seascapes, but they are not “scapes” in a representational sense, not really depictions. The paint becomes the atmosphere, made up of time, weather, light and shadow. Sure, one gets the impression of the water surging, impelled by the force of wind and tides, and the rainclouds sweep over the sky like curtains. But all of this happens in an abstracted way, arranged in dynamically intertwined compositional blocks. Being tied to, but not quite illustrating, the sea gives Hodder some leeway and considerably ups the paintings’ metaphoric potential, frees them to be about lots of things, to be read in several ways.

It is as though Hodder has literally learned well, in the best sense of the term, from Hughie O’Donoghue’s working process, his way of shaping a painting

Visually, the work continues in the romantic tradition, with Turner as the most relevant precursor, though it is actually hard to imagine Hodder’s paintings without the more recent example of Hughie O’Donoghue. One could also mention other fine painters of weather, including the late Sean McSweeney, Donald Teskey, Stuart Shils and Melita Denaro, with all of whom she shares a correspondence on some level. But it is as though Hodder has literally learned well, in the best sense of the term, from O’Donoghue’s working process, his way of shaping a painting from the physical management of pigment, like working over a piece of ground, so that the motif emerges organically out of this ground of paint. Whether influenced by his example, or independently, she has learned how to make this work very effectively. As a process it fits perfectly with what she is trying – and indeed managing – to do.

The show includes two relatively large works, Storm Tide I and II. The latter is the better of the two, though it is also the more difficult from the painter’s point of view as it is keyed to a lighter palette. You can confidently ratchet up the drama with a bit of contrast, but it’s tricky to invest a painting with gravitas when it hinges on a subtle tonal arrangement of pale, smoky hues. That’s very effectively managed in Storm Tide II, and in many other pieces on a much smaller scale. The low silhouette of a ship, usually vague in the murky visibility, recurs in several works, and one particularly striking picture, Docklands, stands out in that the infrastructure of the docks is discernible – very subtly – and adds a great deal to the pictorial structure. Turner’s last words are famously reputed to be “The sun is God”, and Hodder’s exceptional attentiveness to the way light defines and infuses everything is crucial to her achievement.